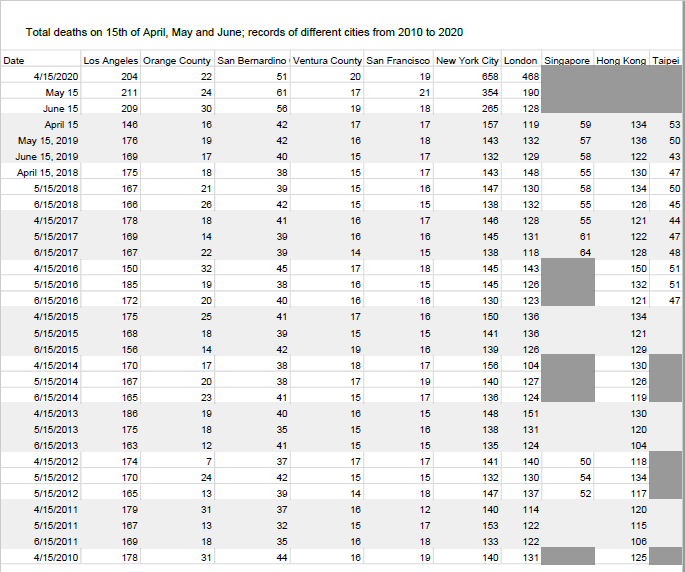 Mid-January, the world was brought to attention of a respiratory disease; one that was ignored at first but over time, its iconic consequences was all but duely recognised. COVID-19 wreacked havoc and announced its entrance by shutting down popular recreational centres such as cinemas, parks while at the same time crippling economies world wide. Travellers were stuck abroad, ties between countries got severed (while others strenghthened) and a few felt it wise to play the blame-game rather than act early. Nevertheless, we are all at a point where we agree the pandemic does exist.

Perhaps the most menacing upshot of the Coronavirus pandemic, is the fetality that accompanies it. Months after several cities confirmed their first cases, lives have been lost at the hands of this fatal novel virus. Those who fought it off and were lucky to survive, remain at risk of the pernicous sequel of this virulent infection.

As we recognize the COVID-19 associated fatalities, it is important to analyze how much affected we have been. One effective way to do this is by comparing the monthly data on the total deaths we have from the previous years, to that of the current year, 2020.

After collecting data for the past decade, we make a comparision of the total deaths in different months in the particular years to that of 2020. Remember 2020 is the year whose total deaths are feared to sore due to the pandemic. Without much ado, let us dive into data indicating total deaths from 10 different cities for the specific dates of 15th of the months of April, May and June.

From the statistics above, we can see that Los Angeles, London and New York are the cities that have been most hit, with their 15th-of-the-month death toll increasing by over 50, 500 and 400 respectively. The counties of Orange, Ventura, San Francisco, San Bernadino seem to have just been slightly hit in terms of their increament in the total death numbers.

One other way to view this data block is to concentrate on the monthly total for the deaths ofthe previous years. We get a quite interesting yet at the same time, shocking revelation. Indulge yourself in the data below and we shall review it shortly below the table.

Apart from Los Angeles, New York and London, we can see that the total deaths from all causes from the the rest of the cities, is just slightly above or even within their usual ranges. This could be attributed to the fact that these cities are less compact, to say the least. The different government strategies layed aside by the different authorities could also be the reason for the increased deaths in some cities as opposed to cities such as Taipei, Singapore and Hong Kong, which barely registered any increament in the total number of deaths during the pandemic, as compared to the previous years.

From the data and brief analysis above, it is quite important to not that as deaths directly attributed to the pandemic may be low in some cities, deaths from other causes indirectly due to the Coronavirus, may have unnoticeably increased. A recent New York Times publication on the reduced emergency response time in New York stated that the 911 system was overwhelmed. This might have led to other preventable mortalities that was impossible to dodge due to the backlog in the system during the pandemic.

In conclusion, more records and comparision of total numbers of deaths as well as causes of deaths, should be made. The pandemic is here, and so are other causes of fatality. If we turn our backs to the hypertensions and the diabetes and the kidney failures etc. we shall be digging our own graves, one that won’t be able to handle the true pandemic that will surfice; ignored-yet-common-diseases as more attention will be geared towards COVID-19.

Data Suppression: Death counts less than 11 have been suppressed to protect the privacy of decedents in accordance with the California Health and Human Services Data De-identification Guidelines.

Technical Notes: Death counts less than 11 have been suppressed to protect the privacy of decedents in accordance with the California Health and Human Services Data De-identification Guidelines.

Completeness: Reported deaths for 2019 and 2020 represent provisional counts based on the records available when the data was retrieved and may not represent all deaths that occurred during the time period. As a result, counts may differ from other published death data.