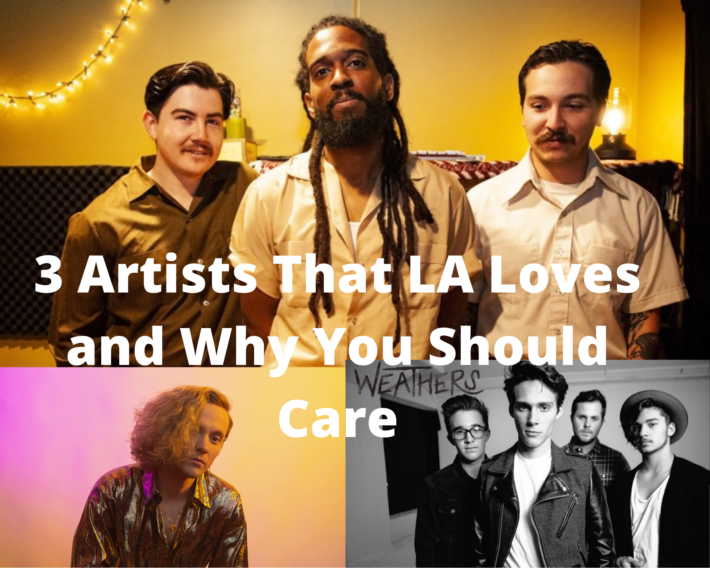 Summer of 2021 has commenced and all systems (are) go! As Covid dwindles, the streets of LA are vibrant again as music makes its way back to the city of angels.

That said, we know you want to get back in the swing of things as you decide what concerts or events you want to attend before summer is over. The LA journal is here to report what our ears have been picking up from the local scene.

We’ve put together a list of three of the top best LA-native artists and bands that have added the SoCal area to their list of dates on their tour. So sit back, buckle up, and prepare your ears for some artist we believe are about to become your new favorite jam.

Get your daily dose of Rock that’s homegrown from the west coast with Weathers. They emerged onto the scene when they released their singles “I Don’t Wanna Know” and “Happy Pills” in 2015. “Happy Pills” was the most added song on alternative radio on its impact date, receiving the most ads for a new artist in the 2010s. “Happy Pills” even peaked at No. 21 on the Billboard Alternative Songs chart.

SOUL, SOUL, SOUL! This amazing trio delivers its own unique blend of Chicano Soul that embodies an early Motown sound in a modern way. Another group that’s brought to you by the golden state.

The trio formally established Thee Sacred Souls in April 2019 and began performing small gigs in Los Angeles, Riverside, and San Diego. Their first two releases, “Can I Call You Rose?”, a sumptuous love song, and “Weak for Your Love”, a chilling hard-hitter are both available online via streaming or for purchase on vinyl.

Michael Lanza is a Billboard-charting pop singer, songwriter, producer, and multi-instrumentalist. Following the success of his latest single “Lion”, which was co-produced with GhostDragon and Ron Reeser and landed him a #23 breakout on Billboard’s Dance chart, Michael has released his new single “Burn” which was featured in the season 17 final episode of ‘Keeping Up With The Kardashians”.

Stay tuned to the LA Journal for the latest on all things related to entertainment and SoCal!