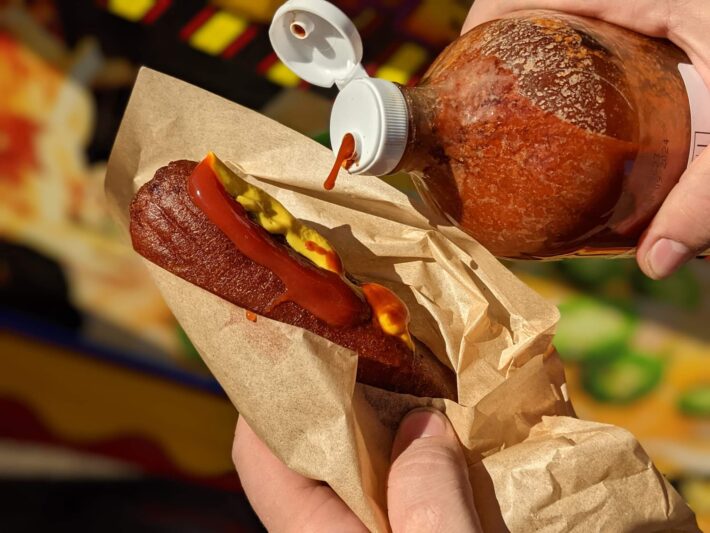 The Antelope Valley Fair. One of the smaller fairs in the area, but one that’s been going strong for a while. The first big year since the COVID-19 pandemic. It hosted a great lineup for musical guests, great food and some crazy new rides.

My fiancé had been asking about going to the fair on a dinner date. Yes, my fiancé is that COOL and it sounded like too good of an idea to pass up! so, we decided that’s exactly what we would do, a fair food tour.

The Sioux burger is the oldest stand at the Antelope Valley Fair. Think Indian fry bread stuffed with gourmet hot pocket filling. the filing mixes with the dough and creates almost a gravy like substance. It almost doesn’t need the side of salsa but the welcomed the addition of tomato and cilantro, with a zing of vinegar. The Sioux burger has been served at the AV Fair since it was located at the old fair grounds. It’s a popular staple that keeps bringing people back decade after decade.

A new fair food fad we were looking forward to this year is the Potato Twist. Take a simple russet potato that is cut into a spiral pattern which helps it cook fast, and give a unique texture. Who would have thought–with this how long the potato has been cultivated–that we could still be coming up with new ways to cook this universal vegetable? Low and behold, we have the spiral and it is yummy. Crispy like a potato chip, yes, smooth and hot inside like mashed potatoes.

Then there is the fair ground staple, the corn dog. A mixture of different delicious meats packed together and cooked to perfection. Place that into a beautifully mealy corn bread batter, stick a stick into it and you have one of the most classic fair foods to ever say hey to your mouth. The crunch. The softness. The cold condiments on the warm freshly deep-fried corn dog, the combo is better than any other, it screams the end of summer beginning of autumn. Almost every booth has it because the word fair may as well mean corn dog.

Alot of people don’t realize that the origin of the deep fried Oreo happened not too far at the L.A. County Fair in 2001. this phenomenon is still going strong. I had never had one of these beauties before but had long heard the tales of how decadent they were.

Elote. otherwise known as grilled street corn, was a staple at this year’s av fair. I had to jump onto this bandwagon. I’ve had street corn before but put some Cheetos on there for novelty and you got me hooked. Corn definitely did not disappoint. That kid was right I couldn’t imagine a more beautiful thing.

Just when we were about to leave the fair gates–our bellies full and fun had we were ready to go, something caught this giant’s eye. Lucky Lukes brewery’s creation, The Cinnamon Roll Burger. Craziest creation we had seen at the fair this year. and let me tell you, the sweet and savory cascading together with the bacon bits and cream cheese frosting … my god. Let me tell you all that this burger worked in every which way and was an amazing cap to the evening of fun and fair food.