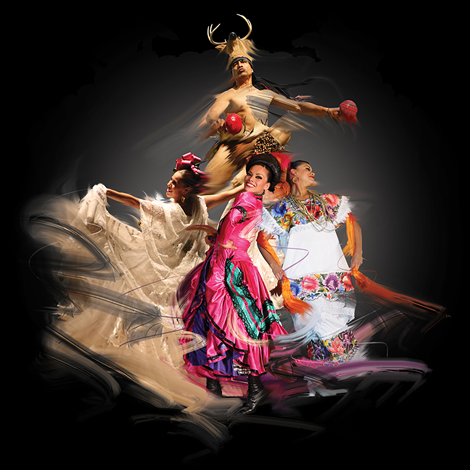 Amalia Hernadez changed the course of Mexican history through dance. Being a dancer herself, she founded the Ballet Folklorico de Mexico in 1952. Ballet Folklorico, for those who do not know–Ballet Folklorico— is THE traditional style of dance in Central America, each dance changing within the different regions. Many dances, if not all are carried by the weight of colonization that the country has dealt with. With all the hardships of its people and the beauty that it flourishes.

Ballet Folklorico de Mexico performed at the Segerstrom Center for the Arts on March 30. The house was completely sold out, and for good reasoning. Crowds clamored to the door, waiting patiently to be bag-checked and scanned. Because of the pandemic masks were required as well as given to patrons that forgot to bring one, or in my case, forgot to bring it along with me while I checked the car in with the valet.

Row W seat 114, orchestra, read my ticket. Naturally, I headed straight to the bar. This was a celebratory arrangement. Being a Mexicana myself, as well as a Folklorista, I was proud to be in the realms of such a prestigious group. I was going to see Amalia Hernadez’s Ballet Folklorico de Mexico.

Drink in hand, double Jim Bean and coke to be specific (squeeze of lime), I headed for my seat, asking the maitre d’ where I could find it. He told me which door I could enter then immediately told me that only bottled water was accepted in the theater. No problem, I thought, I had to use the restroom anyway.

The restroom was packed. It was packed with women who shared the same passion that I have for this form of art. It is art. We all tried to take the last seconds of our freedom to relieve ourselves before we were claimed by the dancers that would soon claim it for us. A bell rang over the loudspeakers beckoning us to our seats. I quickly chugged my friend in a plastic cocktail cup and headed to it.

The Segerstrom theater is beautiful. Walking in through a shallow door, I was opened up to a vast abyss. I tried to use my phone to capture the moment but the WIFI was not working and I had not even more than a moment to get to my seat. I found my party, made myself comfortable, sat back and waited for the show.

The lights dimmed. Music played and the crowd cheered, already knowing that this was going to be amazing. The anticipation was almost excruciating. Where were they? How will this cornucopia of mastery begin, then it happened.

Aztecas (Hijos del Sol), took the stage first. This is deemed appropriate since this is our beginning, these are our raices (roots). We are children of the sun. The elaborate costumes of Aztec dancers–dancing to a played out war with a lit sun on the backboard–took over the environment that the performers now owned. The jumps and bowed heads to the sound of rhythmic Indeginous drumming filled my ears.  We were theirs now. Feathered head-dresses and loincloths clothed the men, huīpīlli (blouse) and a cuēitl (long skirt) clothed the female dancers. Although I was more than 500 ft away from the stage, I could still feel and hear the vibration with every powerful step of these barefooted artists. It shook me.

All the dances were beautiful, expertly performed and choreographed, but some awed and amazed me more than others. They will forever be in my remembrance. One of which is the danza “La Revolucion.” It is dedicated to Adelitas or “soldaderas”– the women who fought in the Mexican Revolution. This is one that I hold close to my heart. I’ve been a Folklorista since I was six. I was taught to be a “chingona” since birth. The performance consists of strong women, swindling rifles, bullets across the chest, woven sombreros and ready to fight. The stance they take is: shoulders back and head up proud. The dancers marched in unison as the crowd cheered them on. For those of us in the audience that know the history of this, we know some of our ancestors, our matriarchs once fought this fight. It was a dance on the war field and now it is a dance on stage; both beautiful and reaching glory.

“Danza de Venado” made me cry, it always has; this was not the first time I had seen this certain performance. A man, dressed as a deer, and personifying one took the stage. He leaps, sometimes performing splits in the air. Gaining so much height, sometimes kicking his legs so far back while bending his back at the same time, he almost forms into a caracol (snail’s shell) instead of a deer. Contorting his body in a way only a ballerina knows how to. It was extraordinary. The dancer was then shot down by two archers. The movement of the dance used the entirety of the stage. Eventually succumbing to the “imaginary” arrows, the Venado (deer) twitched in pain, fighting an imminent  death. It was beautiful and horrible to watch at the same time. As tears ran down my face I had to hold my breath when the performer, alone now on stage, spotlight on him, collapsed front and center to his audience. Then blackness, a moment of silence, and then a roaring crowd. I couldn’t help it but to stand as my hands clapped above my head, shouting out a grito (yell) in acknowledgement of the artistry that I had just witnessed.

The night commenced with “Son de la Negra.” A song and dance traditionally preformed by Mariachi and well welcomed at backyard parties and large stages alike; stemming from the region of Jalisco, Mexico. Charros (a Mexican horseman or cowboy, typically one in elaborate traditional dress) took the stage. The crowd went wild, myself included. The strums of the guitar and the blow of the trumpet signaled the zapateado ( a rhythmic stamping of the feet). More gritos from the crowd were heard. The female dancers threw their dresses, side by side romantically to their male counterparts. They all looked like they were in love, maybe they are. The audience was in love with them. The dancers then flung confetti to the crowd, still dancing which created a hole in the fourth wall, one that we were all glad to walk through.

“Viva Mexico!” was shouted by the ballet company and we, the audience, shouted back during the last and final bow. I felt at home. I was so proud especially in a time where I have seen the degradation of my people at the hands of others. This was not just a performance, this was a message. A message that the Brown skinned people on this earth are loud, proud, beautiful and extremely talented.

The beautiful combination of modern, contemporary and traditional styles that the group carries is one that no one else can execute properly in my opinion. These professional dancers tour the world spreading the artistry that is solely Mexican. The grueling practices and long hours of preparation is something that they know all too well. Dance on this level is a passion that can be seen on the faces of every dancer, as they sweat it out during every performance, every leap and every stomp of the foot. Amalia Hernadez’s Ballet Folklorico de Mexico will always be a force in the dance community.

Tickets and information further on the dance company, Ballet Folklorico de Mexico, can be found at https://www.balletfolkloricodemexico.com.mx/