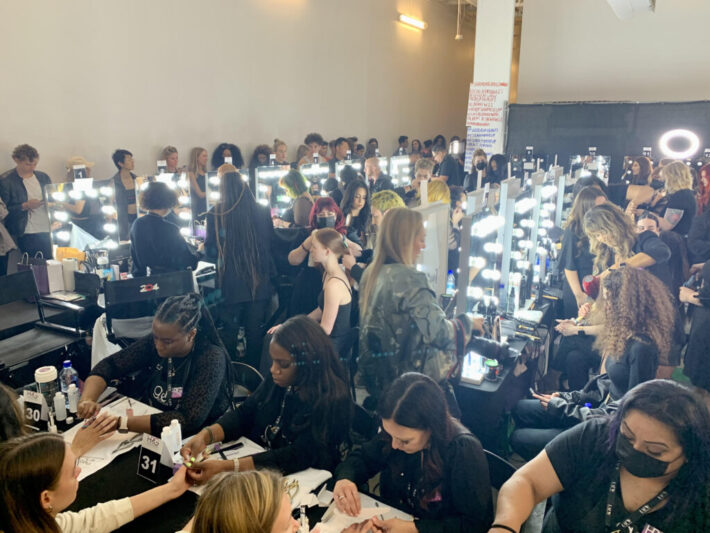 Los Angeles proved once again to be an astounding hub of symmetry and resplendence last weekend. I received the opportunity to be a cog in the immensely vogue wheel of fashion’s highest tier … here is my tour.

Another season of Los Angeles Fashion Week arrived and exited with graceful aplomb of pomp and circumstance. The finest designers from around the world flew in to congregate at the famous Peterson Automotive Museum, where the focus switched lanes from luxury, antique cars to luxury neo-modern clothes. The existence of LAFW is a microcosm of macrocosmic proportions. Doe-eyed models with first opportunities meld with cat-eyed, stoic-faced runway aficionados. Photographers run amok, flashing and clicking furiously to capture every fluid pose. Designers waltz in, assistants in tow, full of an unknown energy fueled by psychotropic muses and caramel macchiatos from Starbucks. Fashion Week in the City of Angels is a sight to behold and an exclusive event most people only see when they are sitting in a foldable chair, looking at the runway. It is truly a melding of worlds that feels sublime to those who experience it.

In the vast world of entertainment, we tend to see only the finished product–squeaky clean and polished through months of meticulousness. The creators create and the consumers consume. The cycle continues and everyone benefits. However, models, designers and the inhabitants of the sphere of glamour, are multi-dimensional and far from only a chiseled jawline or sashay.

The difference between the glitz and choreography of the LAFW runway and the frenzy of the backstage production is a labor of magic all its own. Over the course of 72 hours, the winter/spring edition of L.A.’s grand display of design, I saw a gamut of emotion and artistry fit for surrealism without the need for a tailor.

I started as a volunteer for LAFW in the previous season, when COVID caused us to have adventurous caution rather than debilitating isolation. Standards were still tight but events were allowed again. The four days of action were perched atop the roof of the Peterson Museum, and the runway was an ivory stretch of newfound freedom. Many fashionistas crowded for the first time in awhile, eager to be outside and see live events in any capacity. Every day was exciting, yet enervating and we put in over 12-hours each day to make sure the details were aligned with the vision of Arthur Chipman, executive producer of LAFW.

Last season, I was a volunteer who worked the front-of-house where I checked I.D.’s; set up the runway, and dressed models. As an aspiring model, I want to immerse myself as much as I can in the industry. I want to be a sponge in anything I do, and LAFW is the Superbowl of West Coast allure. Being trusted as a representative for this event not only solidifies my knowledge right at the source, but it puts me in a radar on another hierarchy altogether.

Imagine being a musician asked to volunteer at Lollapalooza. You would be paloozaed out of your mind. It was truly an eye-opening experience to the point where I quit my job at Target the next day.

Having models and executives make you feel like you belong is a mode of sorcery that can make you chase your dreams no matter the circumstance. I couldn’t wait to do it again.

This season, I was asked to be a member of the beauty coordination team under Kristin Longstreet, head of Hotroller Girl Productions. She is an L.A. based hairstylist and mogul who heads the makeup, nails, and hair. I felt honored to be a room runner for her and I was going to put my best foot forward. After setup day on March 30, I arrived early on the March 31 to a room full of volunteers draped all in black clothes with the LAFW pin and eyes full of hope. Seeing their curiosity and energy was wonderful, but I continued through the maze of white walls and camera equipment.

The backstage is a massive area consisting of the model waiting deck, a craft service table topped with healthy snacks and water; the MUA section with lines of bulbed vanity mirrors reminiscent of a broadway spectacle, and designer rooms curtained off in the very back; separated by the number of designers for each day. The winter/spring season was only three days this time due to logistics but great things come in three’s, and by the end of the trilogy, I would be even more changed by inspiration.

As the hairstylists and the production team filed in, we were already feeling optimistic about the day. We had two designers on day one: Rocky Star and Michael Cinco. Rocky Star is an Indian designer with a proclivity for Victorian floral and dark elegance. His burnt palettes are laden with gold arches and crusted layers of precious metal. It is Gatsbyian and baroque in the same breath. Michael Cinco’s line resembles a wintry dream evoking “Alice in Wonderland” and a Narnian fantasy, complete with adonisal models of which Dior would be proud. Day two had five contemporary-style designers, including Filipino cognoscenti Puey Quinones and local menswear bold man, Ron Tomson. I unfortunately missed day two because of a commercial audition, but I was there the final day for some streetware-oriented showstoppers like Dune-inspired Demobaza, who could have been extras in a Mortal Kombat installation along with the dazzling cotton candy dream love, Jimmy Paul–who flew in from Amsterdam.

Over the three days, Kristin and Jose Duran presided the MUA station and we began to check in the models who were out of breath from uncertainty and excitement. I got to welcome them and guide them through the process, passing out cards that indicated the stylists who would put cosmetics on. I also made sure the space was clear of any “riff-raff,” where no one could block the parade of dressed figures. Photographers flocked around while some other models came early to unpack; as well as practice poses and chatter with their colleagues.

The energy was kinetic.

All the beauty artists were laughing and focused on the models, painting and ironing hair; sculpting them into the mirage of living art they were meant to be.

Everyone I talked to while I scrambled around re-filling product and doing crowd control, was much less pretentious than you would think. I talked to a gorgeous model from Belarus named Kate Nemtseva, who immediately was receptive to conversation while we sat and waited. She loved the warmth of L.A. and didn’t much miss the blustery winters of the East. We bonded over my Midwest experiences and not liking cold. Other models smiled at you as they towered over in their runway-ready fatigues. They all snapped selfies and were immensely appreciative that they were even there. Jimmy Paul, who I met after the end of day three, treated me as if I was an equal. His innocent child-like positivity lit up through his voice and his unsure gestures. He was elated to show his psychedelic collection of acidic fur coats and alternate universe denim. Photographers stopped and talked between shots, exchanging Instagram information and motivational quotes.

What also stood out to me was the comedic resilience of my fellow staff and hairdressers. Every time I would walk through the hot emanation of the beauty section, I would call out to everyone that I was handing out water; as if I were a gatherer of dead bodies in Monty Python. Instead of water though, I changed the synonym. First, it was water, then I asked who wanted imbibements, then hydration, etc. The hairdressers and MUA’s were cracking up laughing. I made friends with Bambi–a crimson-haired delight– and Don, who helped me solve an unfortunate product dilemma when we realized one of the sponsor’s palettes were broken from shipment. I had to spend several minutes ransacking the boxes in the stockroom, only to salvage just enough to save the day. The sponsor was heavily upset but was thrilled when we figured out the problem.

I met some remarkable friends during the course of the three days. I met a woman named Kessie, who was a sponsor for the event and she flew in from Tulsa. She could be anyone’s aunt and was always laughing and being gregarious.

She told me that Tulsa Pride is one of the best Pride events in the country, and not to be shy. The volunteers were incredible and vivacious–always wanting to help and hungry to know as much as possible. We all cheered the models as they went upstairs in dazzling arrays of splendor and cheered them again as they came back with victorious grins. People hugged, guzzled down iced coffee like addled fiends, and posed heatedly to have their essence sealed in a Getty Image. Designers peacocked to and from their rooms in celebration, grateful for the opportunity within the magnitude of one of the world’s best moments.

The experience of Los Angeles Fashion Week, complete with red carpet affluence and influencers dotted in the seats halfway between the reality of their screens and the stage–was an encyclopedia of sonic and aesthetic encounters. This retelling should be a book honestly. Let me know, publicists (wink wink). We toiled over 12-hours each day to produce something momentous, and as the models filed out with their suitcases and air kisses to whoever would receive, as murmurs of after-parties at Skybar rippled through hyper personalities, as the lights shut down and the mirrors were put away, the beauty team and I stood indefatigably in the partition hugging each other and knowing through worn smiles that we did something brilliant. We created art through movement, sweat and tears. Arthur lauded Kristin and Jose’s efforts to the point where Kristin cried in gratitude. Memories are built and dressed as much as the models are at L.A. Fashion Week and next season in 2022 will be even more remarkable. We created magic below the runway on the second floor. While the models were statuesque and confident, we were the underground responsible for the alchemy. You don’t get too many moments like that in life to know you had an effect on something greater than you. That sticks with you more than the glitter on the heads of the Michael Cinco models. I didn’t go home and quit my job the next day this time. I instead wrote about it, and that is a job that never feels like work.