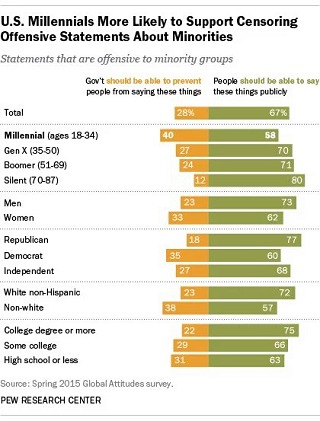 Disclaimers, trigger alerts and microaggression:
I was born and raised in NYC. I am 50 years old. My bio is here.
I am a (liberal?) Democrat. I have given, hosted, bundled, been on finance committees. I’ve split the vote. I can read polls. I can make up compelling statistics
I was infrequently in school, I cut a lot of classes. I was inadequately indoctrinated and only partially assimilated.
Hobbies: I study Supreme Court decisions, Roman, Greek & American History. I play scrabble.
I have an unpleasant but occasionally profitable habit of asking ‘why’ until I understand all the complexity of something.
I intend to vote for  Trump, I wrote about it here
[vc_separator] Is political correctness good or bad?
Is life in a safe space…safer?
My brother has a hobby of close up magic, lots of cards and coins. Things get palmed, thrown into the sleeve and nothing is ever as it seems. I grew up in training to solve how the trick is done. I would look for talk that distracts from hand movements and to always watch the other hand.
So it is also with politics. Lets remove ourselves from the ’emotional’ and be like Spock.
The Orlando Pulse massacre
The FBI… knew the killer was radicalized and had interviewed him 3 times, was a follower of a bank robber that prosecutors warned would recruit people to carry out violent acts, visited Saudi Arabia, was an active member of a dangerously activist mosque, knew that co-workers alerted authorities, Disney advised authorities they felt he was casing Disney Land, who the FBI knew had close links to another American citizen turned Islamic Terrorist and suicide bomber, a person whose father himself was radicalized and very extremist in his views and the FBI was contacted by a gun store owner after the killer had asked about body armor …took him off the FBI watchlist
We, the taxpayers, spend hundreds of billions of dollars on our ‘collective’ micro/macro security.
Was the FBI neglect deliberate?
Was the FBI neglect forced?
Was the FBI defanged and sanitized?
Was the mission of the FBI corrupted by a social agenda that denied the FBI the tools to restrain terrorists?
Was the FBI investigation seized by our own government for fear of appearing ‘anti muslim’.
And on whose desk does the buck stop?
President Obama recently made his first presidential visit to a mosque in January. Not just any mosque, but one led by a very troubled history. The resident scholar, Yaseen Shaikh. has been extremely vocal in his hatred of homosexuals.

Entangling Alliances. Has Saudi Arabia, a country that is at its 20 year record for beheadings, a country that practices Wahhabism, a country that criminalizes homosexuality, exerted too much influence in our politics? Have they discretely funded too many campaigns, too many presidential and Senatorial libraries? Have our politicians become mercenaries and Americans are not their highest bidders?
Why has political correctness so aggressively being injected into legislative and judiciary and Executive agendas?
Is #FightingForYou also #VictimizingYou
Civil disruption is being sown under the surface of political correctness. It is not organic. Mixing LGBQT’s with people religiously intolerant is combustible.
Free speech is a safety valve. Reducing our language of any possible offensive character is being engineered not to salve, but to create turmoil. Big state (your tax dollars) is manufacturing chaos and then big state (your tax dollars) is coming into legislate and police. Big state is setting the fire and then calls the fire department and becomes a hero.
It is a surreal humor that progress is, in fact, not…
Violent crimes are increasing in cities and minority populations are the most affected
Wealth inequality has widened along racial, ethnic lines since end of Great Recession
Forget what the magician says, watch their hands…
Did political correctness kill 49 people?
Lastly these unrelated notes:
There are Christian terrorists. I do not dispute in any way that religions can kill.
Socialism kills too.
Gun control, box cutter control, knife control, thought control.
Had the killer remained on the watchlist he would not have been able to buy the weapon.
I am for getting guns off the streets and reducing the availability of high-powered weaponry.