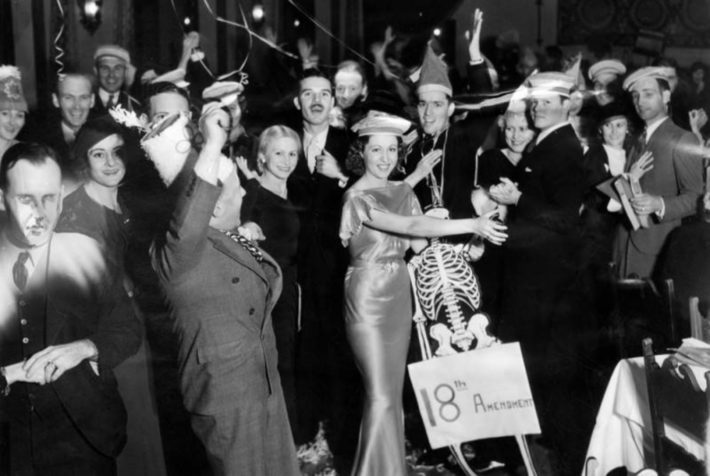 December 5 marks 85 years since the end of Prohibition, that dark era when booze was verboten but everyone figured out how to drink anyway. There are many places you could raise a glass to Repeal Day, but why not celebrate somewhere period appropriate? Here are 11 L.A. restaurants and bars that existed (in one form or another) before, during, and/or just after Prohibition and are still going strong.

While its identity as the Golden Gopher only dates back to 2004, when Cedd Moses and 213 Hospitality took over the space, the Golden Gopher is the proud owner of a liquor license dates back to 1905, when the bar opened as the Golden Sun Saloon. Because of this ancient license, the Golden Gopher is allowed to sell alcohol to-go, perfect for continuing the Repeal Day fun at home. The illegal in-between period of L.A. speakeasies can be difficult to nail down (as Chris Nichols has previously pointed out), but it’s been reported elsewhere that the saloon survived Prohibition by selling “near beer” and “medicinal” alcohol. 417 W. 8th St., downtown.

The once high-class King Edward Hotel’s bar was open from 1906 until the start of Prohibition in 1920. During the “noble experiment,” the space reportedly operated as a piano store, but those in the know were able to get a drink at the basement speakeasy. The piano store closed almost immediately after Prohibition ended, leading to the opening of the newly rechristened King Eddy Saloon. 131 E. 5th St., downtown.

Cole’s originally opened in 1908 and claims to be the originator of the French Dip, a claim also made by Philippe’s the Original, which also debuted that year. Cole’s stayed open as a restaurant during Prohibition and on Tuesday, April 4, 1933, it was granted one of the 69 liquor licenses released by the Board of Police Commissioners in L.A. Nowadays, Cole’s has a not-so-secret speakeasy called the Varnish hidden behind a wall in the back of the restaurant. 118 E. 6th St., downtown.

The storybook-style Scottish pub and restaurant on Los Feliz Boulevard opened in 1922 and became a hit with Hollywood types, including Walt Disney and his animators. While there’s no evidence that the Tam sold alcohol during Prohibition, when booze was re-legalized in 1933, the restaurant quickly began selling bottles of beer for 25 cents. 2980 Los Feliz Blvd., Atwater Village.

Built in 1924 by Culver City founder Harry Culver, the six-story hotel was the first “skyscraper” on the westside. Legend has it that a secret tunnel was built under the hotel to sneak in alcohol during Prohibition, but it’s more likely that guests used the tunnel to cross under busy Culver Boulevard. 9400 Culver Blvd., Culver City.

These two Mexican restaurants were founding businesses on Olvera Street when the alley—formerly Wine Street—was reborn as a tourist destination in 1930. Both were among the first establishments to receive a beer and wine license from the Board of Police Commission in April of 1933. In the 1950s, El Paseo moved from its initial address to another location on Olvera Street, it now sits in the former site of the Cucamonga Winery, which became a soft drink manufacturer during Prohibition, according to the restaurant’s website. 11 E. Olvera St. and 17 W. Olvera St., downtown.

Hollywood’s last real dive bar formally opened its doors in 1934, but it had been operating as a private speakeasy since 1930, when the neighboring Pantages Theatre opened. Allegedly, the speakeasy was only accessible through a now bricked-up entrance inside the theater. 6245 Hollywood Blvd., Hollywood.

Harvelle’s opened its doors as a dry jazz supper club in Santa Monica in 1931. It’s unclear if the club ever served as a speakeasy, but you have to admit it seems unlikely that a blues and jazz club that opened at the tail end of Prohibition was a totally dry venue. 1432 4th St., Santa Monica.

When construction began in 1931 on Santa Monica’s landmark art deco Georgian Hotel, it was clear that Prohibition’s days were numbered, so the hotel was designed with a built-in speakeasy. The former speakeasy space is currently in the process of being transformed into a bar and restaurant called Nineteen33. 1415 Ocean Ave., Santa Monica.