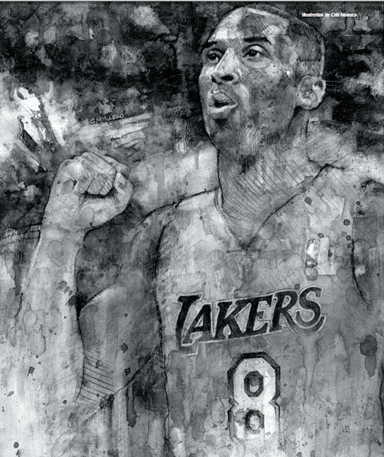 His name is echoed over and over again like no other.

As if he’s forever standing at the edge of a canyon.

And others are just waiting to see him fall. Itching to push him over.

When others speak his name, it is now just Kobe. The “Bryant” went the way of other unnecessary names of great players, where one name is all that is required to identify them.

But while most greats have a “love-hate relationship” with fans and critics, it’s more like a “hate-love relationship” for Bryant. Some would argue a player becomes great when people start hating him.

Bryant’s fall from grace is well known. The events widespread like the story of creation.

There’s the rape accusation. The trial. The non-guilty verdict.

Then there’s the break-up accusation. The trial (a 34-38 record in 2004-2005). The guilty verdict of breaking up a three-time NBA championship team.

But still he stands. Defiant.

Others are pleading for his failure. Urging on the Los Angeles Clippers to strip the City of  Angels away from the Lakers’ grasp.

It sure seemed like it was going to happen. The Clippers began the season fast with power forward Elton Brand garnering MVP consideration while the Lakers were spiraling to hopelessness. The  Clippers have won four straight against the Lakers coming into a home game against them on Jan. 7.

That game, on Jan. 7, when the Clippers were finally supposed to reverse the roles for the title of “the other Los Angeles team,” was  when Bryant resurfaced.

Even before his 81-point masterpiece (81!), Bryant seized Los Angeles.

The following quote is a preview of what will be known as The Beginning. The beginning of Kobe Bean Bryant’s re-emergence:

“I wish,” Lakers point forward Lamar Odom starts, searching for words to describe what just happened. Bryant scored 50 points, 40 in the second half, to lift the Lakers to a 112-109 win over the Clippers.

“I could draw a picture of the look on their faces. Not disrespecting them. But it’s unusual when you’re playing against someone and they can’t believe (what’s happening). For a time there, it felt like he was on the court by himself. It was like God put Kobe here for us to watch him play basketball.”

The moment you walk in, you notice them. Hanging like reminders. Shoving the memories lest ye forget.

That Staples Center is the Lakers’ home.

Nine gold championship banners and seven retired gold jerseys and one to commemorate former Lakers broadcast announcer Chick “The Legend” Hearn who died in 2002 ever present, towering over the stands.

The lone resemblance of this being a Clippers home game are the cursive red, white and blue words on the hardwood.

One front-row seat at Staples Center can cost about $2,000 at a Lakers home game. Tonight? The seat costs about $800.

Even the two teams’ celebrity fans list is disparaging.

But on this night, all of that was set up to change. The Clippers were going to continue Bryant’s descent.

When the ball found Bryant. So did the boos.

No matter how much he juked. Crossed over. Wiggled though.

He couldn’t escape it.

The sellout 20,154 in attendance booed every time he touched the ball. And cheered when he passed it.

Tonight, “Kobe” is replaced with “You suck!”

Yes, his. No matter what the hardwood says on this night.

Bryant will prove that.

The Lakers were down its biggest defi cit 72-59 with 7:08 left in the third quarter. The Clippers’ hold on Los Angeles almost complete.

He made 11 of his next 18 shots, including four 3-pointers to bring the Lakers a victory and Los Angeles its king.

He hit from the corner. From the top of the key. From anywhere he chose to.

Lakers fans now came out in droves. The crowd was colored more Laker gold than ever before. Standing. And chanting.

Just minutes after booing him with every touch.

“This was a big game for us,” Bryant said. “A lot of the papers were writing about this game. After halftime, I just tuned in. I just over-willed these guys (the Clippers).”

In the locker room dripping sweat and envy, Clippers guard Cuttino Mobley, who was overshadowed after a team-high 36 points, said Kobe is like a shark. He can sense fear in his opponents. NO.

That’s when he attacks.

“I saw they kept switching players (to defend me),” Bryant continued. “I could sense fear in the first player that guarded me. When they switched another player on me, that’s when I wanted to bring him to (his) breaking point. Then another player, I want to take him to (his) breaking point. My thing is, who ever’s guarding me that you’re going to crack before I will. I’m going to keep pushing you until you give in.”

“It was just a personal challenge for him to attack the whole team,” Phil Jackson told reporters after Bryant’s 81-point explosion, the secondmost points in a game by a player since 1962. “It was not exactly the way you want to win a game, but when you have to win a game, it’s great to have that weapon to be able to do it. … I’ve seen some remarkable games but I’ve never seen anything like that before.”

Lakers owner Jerry Buss told a reporter it was “like watching a miracle unfold.”

This is nothing new.

Some would argue Bryant’s re-emergence was his 48-point effort the night before the win against the Clippers. Bryant made all seven attempts from 3-point range to beat the Philadelphia 76ers, 119-93.

But that wasn’t the night Los Angeles was going to be claimed by another team. Another player. That wasn’t this night. When Bryant brought his team back and showed Los Angeles his defiance.

Bryant did it throughout the second half and at game’s end.

After Brand strokes a turnaround post move, the Clippers go up 109-108 with 11.4 seconds left.

He does. And drives. Levitates over three defenders. Flying to his left.