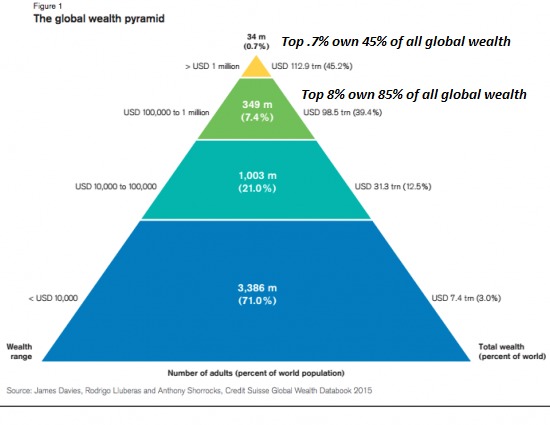 Centrally issued money optimizes inequality, monopoly, cronyism, stagnation and systemic instability.
Everyone who wants to reduce wealth and income inequality with more regulations and taxes is missing the key dynamic: central banks’ monopoly on creating and issuing money widens wealth inequality, as those with access to newly issued money can always outbid the rest of us to buy the engines of wealth creation.
History informs us that rising wealth and income inequality generate social disorder.
I explain why in my book A Radically Beneficial World: Automation, Technology and Creating Jobs for All.Access to low-cost credit issued by central banks creates financial and political power. Those with access to low-cost credit have a monopoly as valuable as the one to create money.
Compare the limited power of an individual with cash and the enormous power of unlimited cheap credit.
Let’s say an individual has saved $100,000 in cash. He keeps the money in the bank, which pays him less than 1% interest. Rather than earn this low rate, he decides to loan the cash to an individual who wants to buy a rental home at 4% interest.
There’s a tradeoff to earn this higher rate of interest: the saver has to accept the risk that the borrower might default on the loan, and that the home will not be worth the $100,000 the borrower owes.
The bank, on the other hand, can perform magic with the $100,000 they obtain from the central bank. The bank can issue 19 times this amount in new loans—in effect, creating $1,900,000 in new money out of thin air.
This is the magic of fractional reserve lending. The bank is only required to hold a small percentage of outstanding loans as reserves against losses. If the reserve requirement is 5%, the bank can issue $1,900,000 in new loans based on the $100,000 in cash: the bank holds assets of $2,000,000, of which 5% ($100,000) is held in cash reserves.
This is a simplified version of how money is created and issued, but it helps us understand why centrally issued and distributed money concentrates wealth in the hands of those with access to the centrally issued credit and those who have the privilege of leveraging every $1 of cash into $19 newly created dollars that earn interest.
Imagine if we each had a relatively modest $1 million line of credit at 0.25% interest from a central bank that we could use to issue loans of $19 million. Let’s say we issued $19 million in home loans at an annual interest rate of 4%. The gross revenue (before expenses) of our leveraged $1 million would be $760,000 annually –let’s assume we net $600,000 per year after annual expenses of $160,000. (Recall that the interest due on the $1 million line of credit is a paltry $2,500 annually).
Median income for workers in the U.S. is around $30,000 annually. Thus a modest $1 million line of credit at 0.25% interest from the central bank would enable us to net 20 years of a typical worker’s earnings every single year. This is just a modest example of pyramiding wealth.

Next let’s say we each get a $1 billion line of credit which we leverage into $19 billion in loans earning 4%. Now our net annual income is $600 million, the equivalent income of 20,000 workers. We did nothing to improve productivity, nor did we produce any goods or services. We simply used the power of central banking and fractional reserve lending to skim $600 million in financial rents from those actually producing goods and services.
Note that we are not uniquely evil or avaricious in maximizing our private gain from the central bank system; we’re simply responding rationally to the system’s incentives.
The system concentrates wealth and subverts democracy not because participants are different from the rest of us but because they are acting rationally within a perverse, exploitive system. Would you turn down $600,000 a year? How about $600 million a year?
It makes no sense for banks and financiers not to maximize their gains in this system. Those who fail to maximize their gains will be fired.

I hope you understand by now that the current system of issuing money and credit benefits the few at the expense of the many. The vast privilege and the equally vast inequality it generates is the only possible output of the system.
This inequality cannot be reformed away; it is intrinsic to centrally issued money and private banking with access to central bank credit.
The problem isn’t fiat money; it’s centrally issued money/credit that is distributed to the few at the expense of the many. If we want to limit the subversion of democracy and reduce wealth inequality, we must decentralize and democratize the issuance and distribution of money.
In the current system, money isn’t created to reward increasing productivity. It is created to increase the wealth and power of the privileged.
If we want to connect the creation and distribution of money/credit with productivity, we must issue new money directly to those creating value and boosting productivity, bypassing the privileged few in central and private banks.
By concentrating wealth and power, centrally issued and distributed money doesn’t just subvert democracy. It also optimizes inequality, monopoly, cronyism, stagnation, social immobility and systemic instability.
The status quo “solution” is Universal Basic Income (UBI), a form of subsistence designed to quell the righteous urge to throw off the monetary yoke of the privileged financial Elites. If scraping by as a debt-serf on UBI is the New American Dream, we need a new economic/social system.
.
and  audiobook) For more,   essentials website.