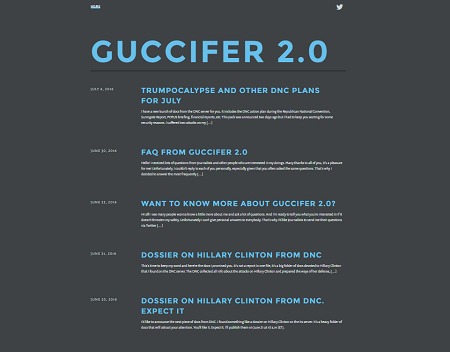 (originally published on July 7th, 2016 on my Medium site, here… Leaking. Guccifer 2.0 is the Hillary specimen cup
Hillary is a hologram. There is little ‘her’. occasionally she is awakened, placed inside that gosh awful, yellow gold, star trekkian, jacket. She is pushed into a crowd of black people as props, recites her part of a scripted interview or an irrationally exuberant rally, and then is shipped home again.
The #ImWithHer apparatus is fucking huge. It is infinite money with a grudge against the voters who rejected #ImWithHer in 2008. All the big and small mistakes have been smoothed and her crisis management team is, in venture capital talk, a unicorn.
#ImWithHer has two major problems.
Her
Everything else
The first issue can be managed by keeping away from opportunities to say, or do, something stupid. Everything will be tightly prepared and the media and its cartoonists are very cooperative.
The second issue is a big problem. #ImWithHer has 30 years of scandals and anew generation of voters who havent heard all of her denials and obfuscations. Her tactics are typically to drag a scandal out and make it episodic, get people bored with it, marginalize, ridicule it and announce that she is being victimized by something white, racist and sinister.
The emails however are a unique problem. I am an expert in the case, I wrote about it here Hillary Clinton. Who will guard the guards? This problem splinters into other problems, its whack a mole and there is no hammer big enough.
It is very clever to see the Hillary punch/counterpunch…
The real Guccifer has now become the ‘lesser.’
Guccifer, the real hacker, from Romania was the hacker who first revealed that he had pried into Sidney Blumenthal’s Gmail account and had yanked many email threads between Sidney and #ImWithHer. There is a very high likelihood that foreign countries had full access to #ImWithHer email server and also that those pilfered emails are still in the ether of foreign countries spying agencies. The whack a mole has more holes than that, but lets stop the punch there and look at her counterpunch.
Guccifer 2.0 is the newer. the greater.
The hacks themselves are remarkably mild and unrevealing. Publicly reported contributions should not be shocking, they are already known. But reframed, in a different spreadsheet format, and it gets some buzz. Shocking, no.
The DNC pseudo, not criminal, collusion with the Clinton campaign. This was already evident, that it now has some insignficantaddition to its paper trail is inconsequential. It does not tip any scales of justice. It is also not so severe as to deeply offend the Sanders voters. The reveal has been focus group tested to be upsetting, but not very. To kick but leave no bruise.
The plans to upset the RNC convention are disappointing. It is not clever or shocking. It is bitterly childish. Where is the funding the radical leftists groups with mexican flags, where is the synchronized newsworthy assaults on the Trumpkins?
The treatment of the media within the hacks is also a humble brag. According to the hack that’s not, the media has been unforgiving and right leaning to #ImWithHer, that is generous air cover to a mass media that has been outrageously kind to #ImWithHer. Journalism entertainers ask no probing questions and no follow ups, and follow ups to the follow ups.
He, or she or maybe even ‘zer’ loves themself(themselves?) in the way of a an overpaid marketing person collaborating with an overpaid IT geek might. Perhaps David Brock and Brian Pagliano are sipping lattes right now, drafting their next (not) devastating release.
This is not a hack. It is there to desensitize people to the uncontrollable event of real news leaking out. Now, Guccifer 2.0 will appear, drawing social media oohs and aahs. And yet, it is merely #DealMeIn flashing her breasts as distraction.
But, its clever. So I give it two thumbs up!