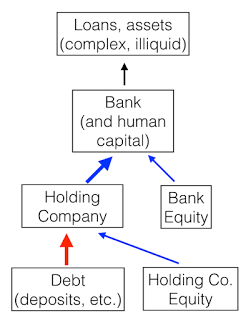 One of the core problems of financial reform is how to “resolve,” AKA bankrupt, a big bank — how can equity holders be wiped out, and debt holders carve up the remaining assets. Big banks are supposed to craft “living wills,” really living vivisection guides, but that effort is clearly in trouble. This blog post expands on a different idea for bank resolution; let’s call it “living trusts” by a similar analogy to estates.

Here’s the idea: Let a bank fund its risky investments 100% by issuing equity. The bank then simply cannot fail — it cannot go bankrupt, it cannot suffer a run.  As I’ve argued elsewhere, I think this is entirely practical.
But suppose it really is important for some reason to carve up bank liabilities into a small amount of highly leveraged equity and a large amount of run-prone short-term debt. Suppose it really is important for banks to “create money,” and to take deposits, and to funnel those into risky, illiquid, and otherwise hard-to-resolve assets. Suppose that equity holders really demand highly leveraged high return high risk bank equity, not super-safe low return low risk bank equity, that the return on equity not its Sharpe ratio is a constant of nature.
OK. For $100 of assets, and $100 of bank equity, let, say, $10 of that equity be traded — enough to establish a liquid market. Then, let $90 of that equity is held by a downstream entity or entities— a fund, special purpose vehicle, holding company or other money bucket. I’ll call it a holding company, and return to legal structures below. The holding company, in turn, issues $10 of holding company equity and $80 of debt.
There you have it — $100 of bank assets are “transformed” into $10 of very safe bank equity, $10 of risky and high return holding-company equity, and $80 of short-term debt.
Now if the bank loses money, the value of the bank equity falls. But the bank is failure-proof and run-proof. Shareholders get mad, may throw out management, may even break up the company. But they cannot run, demand their money now, and force bankruptcy.
The holding company can fail however! Suppose he bank loses $20. The holding company owes $80 of short term debt. Its assets are worth .9 x $80 = $72. It’s insolvent. It fails. Holding-company equity holders are wiped out. Holding-company creditors get the assets, common stock in the original bank, worth $72/$80 = 90 cents on their original dollar.
It need not be that drastic. Its likely the previous short-term debt holders don’t want stock, and would want to sell it in a hurry. Dumping 90 shares on the market might be tough.
The holding company could do a 5-minute recapitalization instead. Holders of the $80 of debt get $60 of debt and $12 of new holding-company equity. The holding company is recapitalized by the flip of a switch.
The key: this resolution/recapitalization can happen in about 5 minutes.
It takes no lawyers, no bankruptcy court, no resolution authority, no FDIC, no deep pocketed buyer, no deal sweeteners and toxic asset subsidies from the Fed, no months in court trying to find rehypothecated securities in foreign branches.  The bank itself keeps humming along. There is no interruption in lending activity, no risk that the ATM machines go dark. There is no run by depositors, brokerage clients, derivatives counterparties. There is no destruction of bank human capital.
The holding company assets—common stock in the bank — are completely transparent. They are liquid, and marked to market instantaneously. They can be handed to creditors at the flip of a switch. There is no tension between “illiquidity” and “insolvency,” no “impaired assets.” We know what the holding company is worth on a millisecond basis.  There is no “contagion,” in which failure of one bank holding company leads people to question another, because everyone knows what the holding company is worth at all times. We don’t need any regulators or accountants to flip any switches — the second the market value of holding company equity falls below a given threshold, the failure or recapitalization happens instantly. Electronically.

As a reminder, here is how banks are organized now. In the event of bankruptcy or a run, the large amount of debt has a direct claim on the bank’s assets. To realize that claim, though, they have to go through bankruptcy court or the resolution authority, and then sell actual assets. Assets are illiquid, hard to sell, especially in a crisis. This takes years and a lot of lawyer fees. Meanwhile the bank operations are often frozen, and its ability to serve customers and make loans is impaired, so the economy suffers.
Current regulation includes “living wills” that are supposed to make it easy to tear up a bank quickly, but there is a lot of doubt that will work. The Dodd- Frank “Resolution authority” is supposed to step in as the FDIC does, to quickly force a resolution before too much value is lost. But the idea that a few government officials can do over a weekend what bankruptcy court cannot accomplish in months seems weak, at best.The living will idea has not been a huge success, with the Fed flunking several banks’ proposals. More deeply, the idea that in the midst of the next crisis — imagine early October 2008 — our government really will step in to a troubled big bank — Citi, say — and force big losses on the other creditors, each screaming their own “systemic importance” seems questionable.

I won’t here belabor the options, but there are lots of ways to organize the same basic idea. I originally thought of the holding company as a mutual fund, exchange traded fund, or special purpose vehicle, to emphasize how mechanical the whole thing is. Now, I like the idea of a holding company a bit better, as equity also has voting and control rights. But this post is about finance and not law, and I’m not that good at corporate finance or law anyway. So fill the box any way you’d like.
“Holding company” is attractive though because many banks are already organized around a large holding company which effectively owns shares in multiple banks. So really all we’re doing here is cleaning up the relationship between holding company and banks, and who has rights to what claims on either.
The central point: Debt, and especially short term debt, is a liability of the holding company not a liability of the original bank. Its rights are limited to recovering common stock of the bank. As stockholders, its owners can choose to liquidate the company if they choose. But they do not have the right to seize bank assets directly.
Clearly, having gone this far, the holding company could be diversified, and perhaps interleaved — one holding company holds shares in several banks, and each bank could issue equity to multiple holding companies — or leveraged bank-stock ETFs, which is what they become. Such diversification would make the debt even safer.
The idea has some parallel with cocos — convertible bonds. The idea there is to issue bonds that trigger conversion to equity under certain conditions. The trouble is just what are those conditions. You need accountants or regulators to peer into notoriously obscure bank balance sheets and decide to trigger the conversion. With the holding company structure, the market price of bank shares does that for you.
What objections remain? Yes, the deposits and short term debt I describe are not perfectly risk free. Diversified holding companies would help. Capital ratios on holding companies would help. Partial funding with long-term debt, as with current banks, would help. But the current structure is not risk free either (!), absent a government guarantee.  In fact, the risk is a good deal smaller, even at the same capital ratios, because this system pretty much eliminates runs and crises. There is no uncertainty about the holding company’s status.
The other possibility is that short term debt, with a bankruptcy court claim on assets, is somehow deeply tied to the bank’s investment or loan origination activity. Lots of people make such a claim, perhaps that run-prone debt is needed to discipline bank managers in a way that closely-held equity cannot do. If there is such a tie, however, it is severed by government deposit insurance, guarantees, and resolution, so we’re not making progress as things are.
(Some of these thoughts are prompted by “Bank Resolution and the Structure of Global Banks” by  Patrick Bolton Martin Oehmke, which Martin recently presented at Stanford. They study a similar issue of where and how regulators restructure banks.)