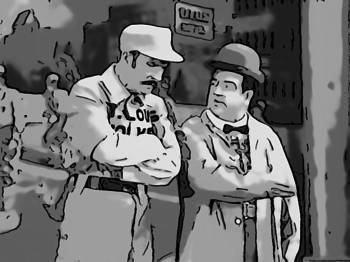 An LP in Venture Capital is in water. The thermostat shows its getting hotter but you dont perceive the change. Do you jump or do you take off your sweater?
In the financial markets the awareness of pain must travel a long distance from dinosaur tail to dinosaur brain.
Costello: When you pay off the first baseman every month, who gets the money?
Abbott: Every dollar of it. And why not, the man’s entitled to it.
During this last year I have had to continually assess my appetite and tolerance for risk. I have lightened my exposure to many marquis tech companies and to legacy VC firms and funds. I re-balanced my portfolios, allocations and management.
The response from many fund managers, recently IPO’d companies and others on the periphery is challenging. I am not gifted with being able to take my cluster of thoughts and broadcast to an audience outside of myself. Everything gets garbled like the sounds from a blown speaker.
“did not run away but, like a ram, I pulled back to butt again harder” Philip of Macdeom, explaining his strategy for the retreat from Thermopylae
We are now several generations and a baby boom past the Archaic period of Venture Capital.
My macro view, unburdened with arithmetic: I am bullish but I ain’t dumb.
The stock market is the stem of the venture capital funnel.
Its not the height of the markets that is problematic for me, its the flawed valuing mechanisms and tolerance of murky earnings. Smart people can will snowblindness on themselves and that is frequently the root of a mispricing.
Startups gone public (SGP) with first generation management teams oftentimes cannot divorce themselves from the rituals and behaviours of a company in Venture Capital fundraising mode. When markets are taking everything down, now is the right time to take hits, make corrections internally and to guide earnings expectations lower. “a stitch in time saves ten” (quote attritbuted to my grandmother.
One of the biggest failures of a company is failing to gain enough distance from competitors. The next big failure is neglecting the gear shifting required for operational excellence and improving leverage. It is my experience that the companies that have matured from ‘good to great’ are in the unsexy business of algebra. They are multiplying nickels and dimes.
At the conical side of the funnel is startups.
Venture Capital has grown beyond geographical borders, it has its own culture and merchants and tradesmen, its own system of weights and measurements. It is a nation without borders.
But empires have to be adminstered and the regulatory bodies and compliance framework have not caught up. Bear markets and losses will change the tables. Retail investors who participated in small rounds and crowdfunding syndicates make good press and always benefit from sympathetic juries and public opinion. Likewise LP’s will band together with Attorney Generals and public pension funds and force disclosures.
There will be blood and there will be many lawyers drinking the milkshakes of the largest VC firms.
For me, this has been an aggravating past year as it is hard to plot.
There are categories and companies I absolutely love but they are priced to perfection.
New monies committed may take 5 years to 75% deploy. I am not getting well compensated to hold a large inventory of unknown unknowns.
Venture Capital funds and managers used to be stylistic, now its all opportunistic.
1st tier firms are squeezing out the 2nd and third tier firms and one of their tactics is overpricing a deal and moving it to a C/D round unnaturally.
This is also having a devastating effect on smaller vc funds to compete for deal flow and for startups to get correctly priced capital.
‘thumb in the scale’: Late stage and unnecessary rounds have been needlessly piled on in advanc eof an IPO, reducing the yield to me.
When a market unravels the post-mortems compel change. It’s the same pattern we saw in the late 90’s when headlines, legislation, compliance and poor returns altered the course for hedge funds, RIA’s and broker dealers.
Also in that frawework, in the late 90’s the wirehouses moved away from being client facing and instead turned towards their own trading desks. The brokers, analysts and bankers left their employers to build new businesses engineered to receive dissatisfied clients as they got wise and left. The best clients always leave first.
LP’s will migrate. Money will be repatriated to family offices and family office syndicates. For many large family offices, the past few years of buys to a fund were only a deposit to get deal flow and rights to future rounds. VC firms to sweeten the pots were very happy to assign unique rights to certain LP’s. Now and going forward, family offices have enough financial and intellectual capital to invest with precision and avoid the scatter shot mega fund VC fund.
In the past few months I have seen family office syndicates become one of the earliest calls to lead a large round. The VC firm manages the book of LPs, does the financials and analysis plus puts up their own money and adds a carry. The company is happy because they have more tolerant investors and quicker access to more, and cheaper, capital. And, the LPs are happy because they get the cream and not the crop.
I am bullish but markets need corrections and marketplaces need to improve parity and transparency.
“For twenty dollars I can tell you a lot of things. For thirty dollars I can tell you more. And for fifty dollars I can tell you everything.” –Madame Ruby from Pee-Wee’s Big Adventure