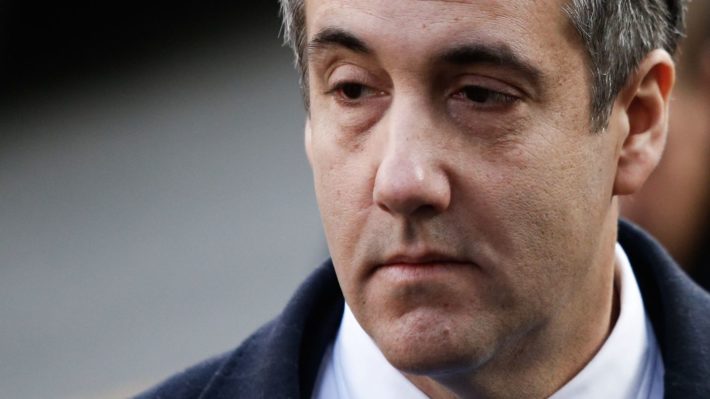 A federal judge sentenced Michael Cohen, the president’s longtime lawyer and self-described fixer, to three years in prison on Wednesday for his role in a series of criminal schemes, some of which Cohen tearfully blamed on “blind loyalty to Donald Trump.”

“Mr. Cohen pleaded guilty to a veritable smorgasbord of illegal conduct,” U.S. District Judge William H. Pauley III said. “Each of the crimes involved deception, and each appears to have been motivated by personal gain and ambition.”

Cohen, once among Trump’s most aggressive and loyal acolytes, had asked to be spared prison time, and he told the judge that he’s tried to make amends by cooperating with law enforcement.

“My departure as a loyal soldier for the president bears a very hefty price,” he said in a tearful speech. “My weakness can be characterized as a blind loyalty to Donald Trump.”

The sentence fell short of the four years recommended by prosecutors in New York, but it still shook Cohen and members of his family who crowded into the packed courtroom. While Pauley read the sentence, Cohen shook his head, his wife clutched their son, and their daughter trembled with violent sobs. Cohen is scheduled to report to federal prison in upstate New York on March 6.

Cohen pleaded guilty to eight criminal charges in August, including two violations of campaign finance law that involved arranging hush-money payments shortly before the 2016 presidential election — at Trump’s behest, prosecutors and Cohen said — to two women who had claimed they had affairs with Trump years ago. The president has denied having the affairs.

Cohen later pleaded guilty to a ninth charge, in a separate case, for lying to two congressional committees last year about a proposed Moscow hotel and condominium project that Trump had pursued during the campaign. It is one of several episodes that special counsel Robert S. Mueller III is scrutinizing in his investigation into possible conspiracy between Trump’s team and Russian authorities.

Cohen’s sentence is significantly harsher than most others who have become ensnared in the Russia investigation. George Papadopoulos, a former campaign foreign policy advisor, served less than two weeks behind bars for lying about his overseas contacts, and prosecutors have not recommended any prison time for Michael Flynn, Trump’s former national security advisor who lied about his conversations with the Russian ambassador during the presidential transition.

Unlike those two men, Cohen admitted to a wide array of crimes. Paul Manafort, Trump’s former campaign chairman, could also face a long prison term when he’s sentenced early next year. He’s been convicted on eight counts of tax evasion and bank fraud related to his previous work as a political consultant in Ukraine, and a plea deal with Mueller’s office collapsed when prosecutors accused him of continuing to lie to them.

Cohen was once among Trump’s closest aides, working directly for him and serving as an executive vice president of the Trump Organization, the family’s private holding company for business ventures around the globe.

The ambitious, unscrupulous 52-year-old lawyer and businessman expected to cash in on the unexpected election of his longtime client. In the months after Trump’s victory in the 2016 election, Cohen earned millions of dollars by pitching himself as an advisor to blue-chip companies looking for connections to the new president.

In addition to the two campaign finance violations, Cohen pleaded guilty in August to six counts of tax evasion and bank fraud involving his New York taxi business and real estate. The U.S. attorney in Manhattan brought the charges.

Cohen returned to federal court in November to plead guilty to lying to Congress, admitting that he had pursued the Trump Tower Moscow deal until after Trump had clinched the Republican nomination, far longer that he had previously admitted.

Prosecutors said the deal, which would have required Russian government approvals, was potentially worth hundreds of millions of dollars to Trump, and that he was regularly briefed on Cohen’s progress.

The push in Moscow coincided with Russia’s covert efforts to meddle in the U.S. presidential campaign by hacking Democratic Party emails and spreading misinformation on social media, prosecutors said.

With his guilty pleas, Cohen — whom Trump long tasked with suppressing negative publicity and protecting his private affairs — emerged as a direct threat to the president because of his extensive cooperation with federal and state law enforcement.

The hush-money case could prove even more significant than aspects of the Russia probe.

Cohen admitted the hush-money payments were intended to influence the election, and prosecutors say they can prove the president’s involvement.

Trump initially denied knowing anything about paying them to keep quiet. That claim crumbled as more evidence emerged, and he remains in potential legal jeopardy. One potential out for him, however, is that to prove a criminal violation of campaign finance laws, prosecutors would have to show that Trump knew what the law required: in campaign finance, ignorance of the law is a defense.

Follow the latest news of the Trump administration on Essential Washington »

In an interview with Reuters on Tuesday, Trump said Cohen’s legal problems are his own fault.

“Michael Cohen is a lawyer. I assume he would know what he’s doing,” the president said. He added that the payments were not related to the campaign and suggested that it should not be a criminal matter.

Cohen’s defense lawyers had asked the judge to keep him out of prison. They emphasized his willingness to meet with federal and state authorities despite criticism from the president.

“In the context of this raw, full-bore attack by the most powerful person in the United States, Michael, formerly a confidante and advisor to Mr. Trump, resolved to cooperate, and voluntarily took the first steps toward doing so even before he was charged,” the lawyers wrote in a pre-sentencing memo.

But the U.S. attorney’s office in Manhattan was not impressed, noting that Cohen declined to fully cooperate with prosecutors there. They recommended about four years in prison and described him as someone “motivated by personal greed and ambition” and “whose outlook on life was often to cheat.”

Prosecutors were particularly scathing in describing Cohen’s role in paying hush money to the two women during the campaign.

“Cohen deceived the voting public by hiding alleged facts that he believed would have had a substantial effect on the election,” they wrote.