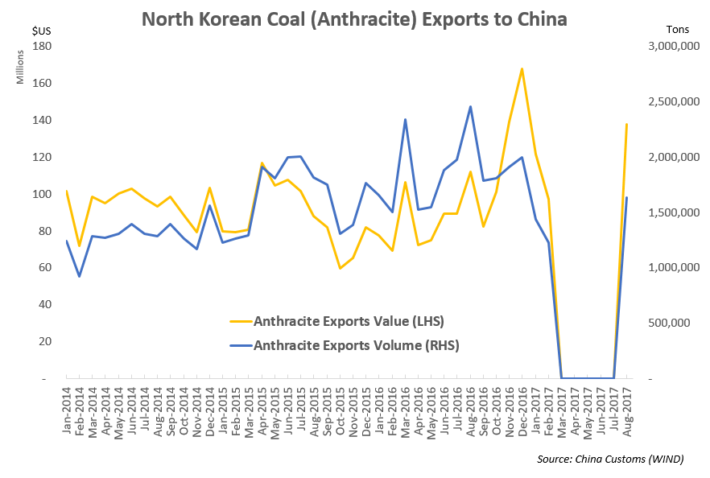 North Korea policy is once again careening between competing administration statements. Over the weekend Secretary Tillerson held open the door to negotiations, stating the fact that the US has channels for communicating with North Korea. Moreover, Asahi goes farther, claiming that we are actually trying to use them, most notably in an upcoming track two in Norway mid-month. The President’s brief tweets (below) not only personally undercut his Secretary of State but undercut the broader strategy of coupling sanctions with a negotiations off-ramp that Tillerson was no doubt trying to convey to the Chinese over the weekend.

In a brief official statement the day before President Trump’s Tweets, State Department spokeswoman Heather Nauert split the difference between the President and the Secretary, further complicating the picture. After a further Twitter post promising that North Korea will “not obtain a nuclear capability”—although it already has—she turned in a more ominous direction, claiming that the window for negotiations will not remain open indefinitely and that the use of force remains a possibility.

US has several channels to communicate w #DPRK, but regime has shown no indication they’re interested/ready for talks re: denuclearization. pic.twitter.com/5AwB7JOy0M
— Heather Nauert (@statedeptspox) September 30, 2017

#DPRK will not obtain a nuclear capability. Whether through diplomacy or force is up to the regime @StateDept
— Heather Nauert (@statedeptspox) October 1, 2017

In fact, what is really happening is that everyone is waiting to see what effects the sweeping Executive Order of two weeks ago will have on North Korean calculations. Everyone I know who watches North Korea—left, right or center—agrees that the EO was a major departure in US sanctions policy. Stripped of nuance, it basically allows Treasury to designate any North Korean person and anyone doing any business with North Korea. The only question is whether the EO will have material and political effect before the President loses patience or feels politically constrained to act.
As a result, we are all basically on sanctions watch, and the North Koreans included (they have formed a Sanctions Damage Investigation Committee, no doubt to figure out how much sanctions relief to seek if they come back to the talks; their weekend statement can be found at KCNA Watch here). First the news, then an update on the larger economic context.
As I noted, the sanctions EO is partially self-enforcing, as foreign as well as domestic banks scramble to ferret out any North Korean exposure. This point is crucial to understand: the effect of the EO does not operate solely through Treasury action but by shifting the incentives facing market actors. That said, Treasury followed up last week with a pretty impressive set of designations. The list included eight banks—the easy part—but also showed that Treasury has been doing some deeper homework. A list of 26 individuals shows that someone has been tracking these banks’ agents. Some examples provide some flavor:

It is one thing to name an organization like the Reconnaissance General Bureau or Kim Yong Chol who heads it. But the Reconnaissance General Bureau is unlikely to transact in its own name, and General Kim is not flying around with cash in a diplomatic pouch. But the newly-designated individuals are, and they carry passports which can easily be entered into a black list and have addresses that can be traced.
It is because of the nature of the EO that China has essentially been constrained to cooperate, and two important directives in the last several weeks have recognized the shifting ground created by the EO. First, the Ministry of Commerce announced that North Korean companies and joint ventures operating in the country have 120 days from the September 12 sanctions date to close shop. Second, the less transparent directive from the People’s Bank of China, reported by Reuters, apparently calls on Chinese banks to not accept new North Korea business and to wind down outstanding loans with existing customers. I am sure the North Koreans will make that process a headache, with plenty of losses no matter what the banks do.
As always, enforcement is the mantra of the skeptics, and there have been a variety of stories that appear to have already found leakage, including reports (that we confirmed) about some transitional coal imports that are probably legal (see the figure below). Among the more interesting stories is one that is not in fact illegal but could reflect Beijing’s interest in mitigating a complete meltdown: a WSJ story (again, confirmed) that China dramatically increased exports of corn to the country in July and August. Yet even with these derogations, neither of which is probably illegal, the big picture remains the same: that North Korea’s bilateral deficit with China is ballooning (see second figure below).

The real question: when will this start to affect prices. Below, we update our black market exchange rate and rice price figure, and once again, there is little to report on the all-important exchange rate front (below). But we do see an uptick in rice prices, and even more importantly, a pretty dramatic rise in oil prices that began well before the sanctions.

The table below, provided by VOA based on information from a diplomat in Pyongyang shows the price of diesel and gasoline in Pyongyang (see VOA coverage in Korean here). What is interesting is that the biggest jump in prices came between January and April, but they saw further increases possibly attributable to the sanctions even before implemented. An interesting Fact Sheet issued by State at the time of the UNSC Resolution 2375 suggests that the US has at least decent intelligence on the oil flow, despite the fact that Chinese customs has basically censored data on this crucial mainstay of the economy. Needless to say, without credible data on oil exports it is impossible to tell whether Beijing is abiding by the oil cap or not. If their compliance is contingent on the US staying engaged, we could be in for a complicated cat-and-mouse game between Washington and Beijing around the emerging sanctions regime, particularly if the President decides to engage in ways that push China back toward its lender-of-last resort role.

Retail Gas Prices in Pyongyang
(based on 15 kilo coupons)

Source: Voice of America
the contributors at the Peterson Institute: https://piie.com/blogs/north-korea-witness-transformation/monday-morning-roundup-more-sanctions [