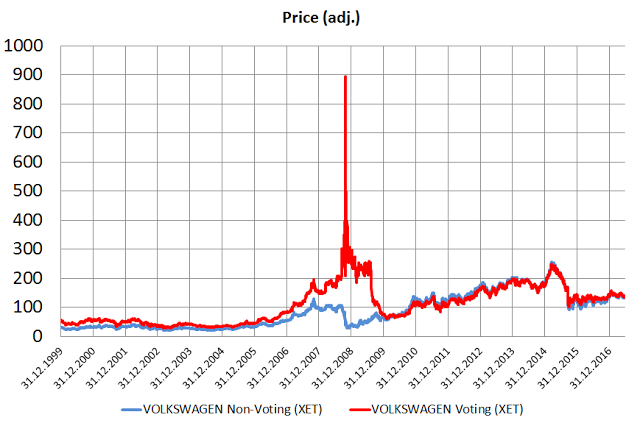 Tim Kroencke at the University of Basel wrote a nice follow up on non-voting shares (previous posts here and here) , which I share with permission. Some of the controversy was whether companies would issue shares and whether investors would by them. It turns out, yes, and he sends a gorgeous example in which control rights and cash flow rights are priced differently and react to different events:
….
In Germany, it is quite common for large companies to issue voting shares (Stammaktien) and non-voting shares (Vorzugsaktien) and one can make nice case studies. Here is one I did a while ago,  that I have updated today, and I want to share with you:
In 2005, Porsche started to buy Volkswagen shares. In 2008, it became obvious that Porsche tried to overtake Volkswagen and the price of voting shares, and only the voting shares, skyrocked. Volkswagen became the world’s biggest company…  well, for a couple of days.
Some figures to give perspective: first, the share price of non-voting vs voting Volkswagen shares traded in Frankfurt:

And here is how prices and yields add up to total returns:

Some observations:
First, the voting component of a share price can diverge substantially from its cash-flow related value. What is small most of the time does not need to be small all of the time. This should really worry any passive investor who simply wants to earn a factor premium. The typical broad index investor wants to earn the market premium. I really doubt that such an investor wants to be involved in the house of cards of the Wiedekings and Piëchs. There is a reason for hedge fund investors being around.
Second, voting and non-voting shares nicely move together – in the long-run. After all, they pay out a very similar cash-flow stream, as you write and as one would expect if the law is set up in a sensible way.
Third, non-voting shares outperformed the voting shares by roughly 100% over 18 years. This is the long-run picture, difference in cumulated returns come from differences in dividend yields. Cumulated over time, the premium for voting can be quite big!  Sure, this does not have to be the case in general. (For example, in 2011, die dividend yield of voting shares was slightly higher.) After all, we are looking at a failed takeover and this is just an example. However, I think one can safely make the point that non-voting shares are likely to better track the value of the cash-flow value of a company and are indeed well-suited for passive long-run investors.
Comment:
I was initially puzzled by the rate of return difference. If you start and end at the same price, but pay the same dividend, how do you achieve a different return? I think the answer is reinvestment. Dividends paid to the voting shares during the spike are reinvested at a time of terribly high prices, and so lose.