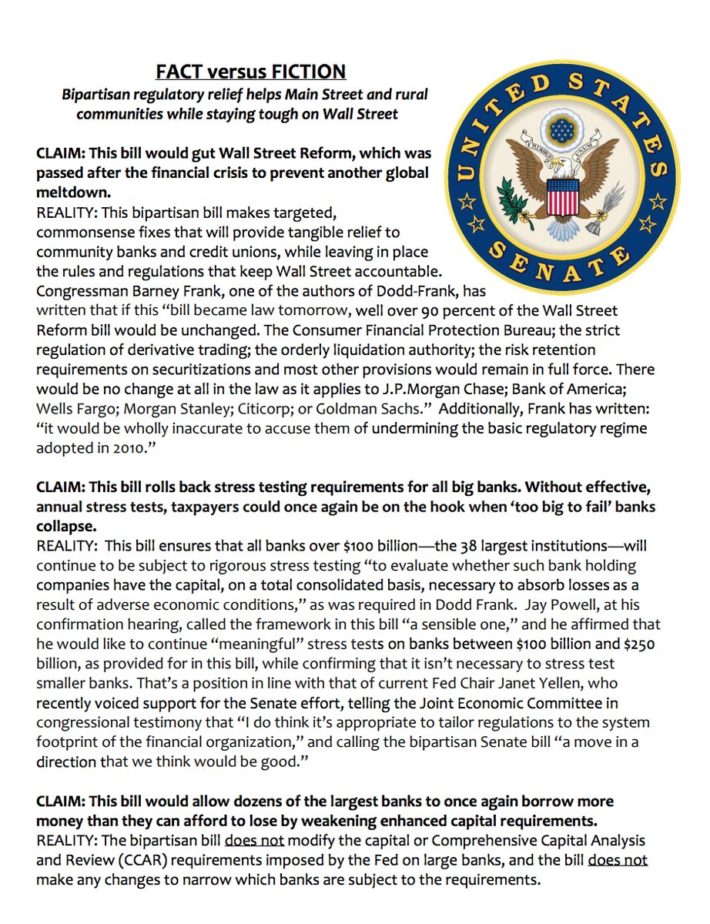 This Myth vs. Fact document Democrats on the Banking Committee are distributing on their bank deregulation bill is a *masterpiece* of technocratic dishonesty.

Let’s do some reverse engineering on this Fact versus Fiction
This document is subtle, and it requires both a very deep knowledge of the subject and a pretty intense desire to mislead people about it. Just a few examples, starting with this.

To know this is bullshit, you have to know that the bill replaces an “annual” stress test requirement for $100b – $250b banks with “periodic” stress tests, which the bill doesn’t define. How often is “periodic”? Who knows! Trump-appointed regulators will get to decide.
Or consider this one. Sure looks like the bill does nothing to oversight of Deutsche Bank and Credit Suisse, right?

Wrong! The bill totally changes U.S. oversight of Deutsche Bank and Credit Suisse, but technically what they put under “REALITY” is all true. It just doesn’t mean what the document suggests.
Yes, Section 165 still applies and yes, the Fed’s regulations for big foreign banks still applies. But the *definition of what constitutes a big foreign bank* is different as a result of this bill….

…and as a result, oversight of Deutsche Bank et al shifts from the Fed to German regulators, gutting U.S. oversight.

The whole document is like that. It’s not that the Dems supporting this bill are saying it strikes a reasonable balance between competing values….
..they’re just trying to convince people the bill doesn’t do what it does. It’s totally dishonest.