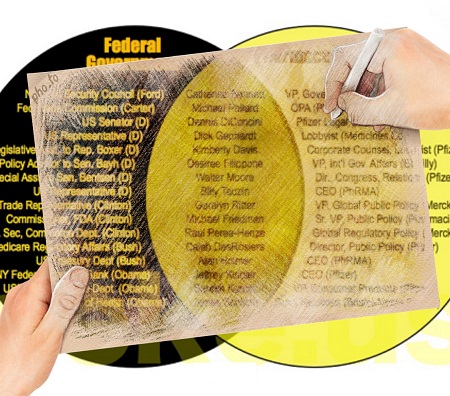 In my last post I wrote about the financial mechanisms of ObamaCare
This continuation is about the broad economic, business and industry implications of ObamaCare.
The Difference Between Movement And Progress
Last week the initial legislative vehicle (a budgetary construct) for an Obamacare repeal was passed by the Senate and the House of Representatives.  Just like the original ACA bill, the repeal vehicle passed along party lines. However, Republican leadership (Ryan, McCarthy, McMorris, / McConnell, Cornyn, et al) have absolutely no intention of repealing ObamaCare, ever.
One of the reasons companies have seen record stock growth is the predictive value of their generational ability to drop the cost of employee health care from the liability side of the ledger. Take a growing and increasingly unquantifiable liability, employee health insurance benefit, and move it to an easily quantifiable cost – The per employee payment to government for Healthcare.
U.S. business interests have been trying for years to level the playing field against the global production markets by removing the cost of healthcare from the business sector and giving it to the public sector. ObamaCare was constructed specifically to assist them in this endeavor.
For widget maker XYZ the cost of employee healthcare is now removed from the cost of the widget and can be quantified as a payment cost just like all other taxes and liabilities.
ObamaCare is Not Failing – It’s Doing Exactly What It Was Constructed To Do
There is a talking point about ObamaCare failing as the cost shifts are too extreme upon the participating electorate.
State insurance regulators across the country have approved health care premium increases higher than those requested by insurers, despite a national effort to keep rates for policies sold on Affordable Care Act exchanges from skyrocketing, a USA TODAY analysis shows. (read article)
The underlying argument is a fundamentally flawed premise. ObamaCare was never designed *not* to overwhelm you with the shifting of massive costs. ObamaCare was designed to crush you in costs.
ObamaCare architects had three key political special interest groups involved:
♦ Union Lobbying – The goal was to rid labor unions of exorbitant (unsustainable) healthcare retirement costs. Andy Stern (SEIU) was primary lobbyist.
♦ Wall Street – The goal was to remove healthcare from cost of goods sold, serviced, or produced. Tom Donohue (US Chamber of Commerce) was primary lobbyist.
♦ Political Narrative – The socially progressive wing of the ’08/’09 Dem Congress pushed the ’30 million uninsured’ narrative. That emotional narrative was the primary media narrative for why action was needed.
The political narrative was a ruse. The 30 million “uninsured” became covered by an expanded Medicaid program. If covering the 30 Million was the end-all reason the quick solution would have been to just raise the income cap on coverage eligibility for state subsidy/reimbursement and *presto* done. However that would not have removed the Healthcare cost from Union Retirement packages, or from Corporations; which were the real reason for the construction.
The beneficiary on the corporate side is the business who doesn’t need to provide the employee coverage; they just pay a flat fee to drop their insured and the fee (tax) becomes a predictable cost of doing business. The large corporations get healthcare off of their balance sheets.
The beneficiary on the Labor Union side is the union itself. Like the corporations, the union drops the cost of coverage from its liabilities. [Initially, there was going to be a fee on contracted healthcare benefits (Cadillac Tax), that was later dropped.] Without the liability the sustainability of Labor Union finances improve immediately.
When you accept the following framework things make more sense:
♦ ObamaCare was never designed sustain itself. It was never designed to survive. It was built with failure as the intended outcome.
♦ ObamaCare was designed to be too cost prohibitive for the individual (employee or self-employed) to carry without a significant increase in wages. The shift in coverage from employer to employee did not have any underlying increase in wage mechanism (if any employee elected for an outside ObamaCare plan their salary would be grossed up)
♦ ObamaCare was built to move the responsibility of healthcare from the private market system into a government market system
ObamaCare succeeded. And…so will its replacement.
The End?