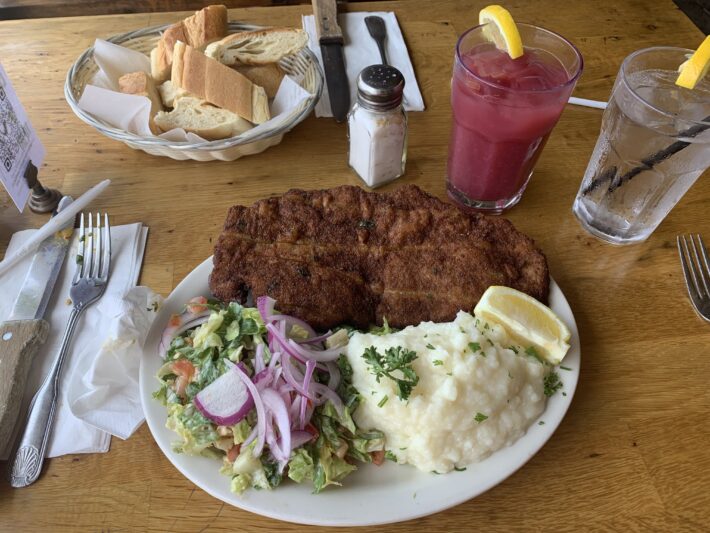 Usually, the moniker “the best-kept secret” is reserved for restaurants with a sleepy grace, powerful character and a sense of gatekept admiration. If you know about it, you must know who’s who and what’s what.

The best-kept secret about ‘Lala’s Argentine Grill’ is that it sucks. Sinking into sophomoric profanity is the last resort, but I say it because I had high hopes that were greatly unraveled.

Lala’s Argentine Grill is not at all good.

I drive past Lala’s constantly whenever I am in West Hollywood. Melrose Avenue is an arterial road full of street fits and snobby jazz fossils. I am familiar with the diversity of delicious food from Normandie down to Melrose Place. Sugar Taco, Blackbird Pizza, Roots Indian Cuisine, Mochinut, Ggiata and more can fill a belly quicker than you can fill a shopping bag at Crossroads.

My palette lately has consisted of Italian food and tacos for more than a human should have. My subconscious caught up one day and I pulled into ‘Lala’s Argentine Grill;’ excited for authentic Argentinian cuisine.

It was roughly 2 p.m. and the restaurant was sparse. There isn’t much decoration to make you suspend disbelief that you somehow wound up in Buenos Aires. The walls are black, large foliage drapes in the back, and only their namesake logo is emblazoned. In a test of wit, I could not tell you if I was somewhere in Argentinia or in a decrepit theater in suburban Delaware rented out by an improv troupe. They were most likely winding down from an early lunch rush, so there was plenty of seating and eager servers.

Strike one for a bad impression.

In Los Angeles, you need to be above any possible standard with no room for mediocrity in order to survive. As a matter of fact, you must set a standard. You have to look glitzy on camera, flashy for TikTok, and you need at least a pair of Mason jars to be remotely relevant. LA restaurant culture incorporates Darwinism at its tastiest. Interior-wise, Lala’s was as forgettable and sad as most of your Facebook feed.

The server Maria greeted me with a maternal warmth I felt safe around. She brought me a bread-basket with oil and told me the rundown. Lala’s has pasta, salads, seafood, and meat variations which are all delicious on paper. Argentine cuisine is highly Italian-inspired, so there was no shortage of Neapolitan-fare and cream sauce. The prices give you an idea that quality is near. The bread was soft and doughy, pairing well with the garlicky oil.

I started with a chicken curry empanada. Granted, it was flaky on the outside, warm and potently savory within each bite, but after that, the lunch took a dark turn.

Overall, the most upsetting part of Lala’s is that you can’t taste the culture in any of the food. The sangria was watery and probably made by someone’s 9-year-old cousin. I dug deep to taste anything alcoholic. My Milanese special arrived in the midst of my disappointment. I grinned politely, hoping Maria wouldn’t sense disdain in my hazel eyes.

The Milanese was leathery, greasy, and thin; a discarded catcher’s mitt you find at a Torrance yard sale. The mashed potatoes tasted instant and microwaved.

The salad was cool and refreshing, but unimpressive. Red onion spooned chopped lettuce and diced tomato. I could have made it at home. It was a plate of milquetoast chow you find in a cafeteria in Purgatory, not Cordoba.

I sat back with a stomach and mind full of shock and dismay. I checked my phone to see if Google Maps guided me to a waffle house instead of Lala’s Argentine Cuisine. Thoughts swirled in my mind. Do some South Americans eat like this? Did the old country approve of this bastardization? Do I have to cross Argentina off my list of travel now? Poor Maria.

I drove by Lala’s for years with the hopes that I was having FOMO. Now I wanted no mo’. Maria’s smile was a welcome dessert and I paid the forty-dollar tab with a sense of despair that comes from knowing not every place you eat will be a hit. Some of your cash will be sacrificed to mediocrity. I paid forty dollars for knowledge that I can rest easy having one less place on my list.

Lala’s Argentine Grill, simply put, is all grill and no thrill. It is devoid of flavor and culture. Even the forlorn servers betray it in their worn faces.

Don’t go. It shouldn’t be a “best-kept secret.” Everyone should know about the dangers to the tongue it poses. Keep driving.