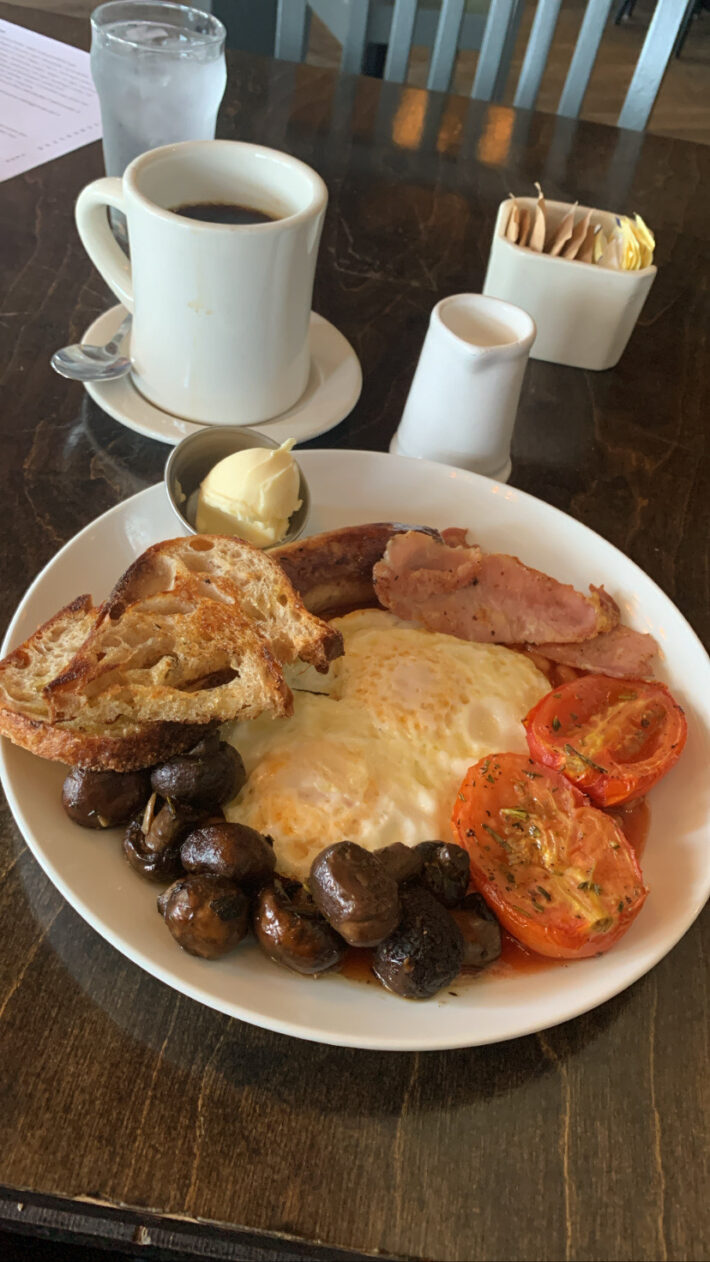 I ate my first full English breakfast nearly by accident at noon on a Sunday. I originally wanted Nomoo, a plant-based burger joint on Melrose Ave. The Melrose is an area I frequent for its miasma of thrift shopping, the clamor of street vendors and especially the food. It is a concentration of hustling, bustling and bold style as well as weed smoke blends with scents of Italian fare and grilled cheese gregariousness.

I only “had-cash” on me and Nomoo doesn’t accept cash … apparently, cash isn’t plant-based. I felt like a relic of a colonial time rip; a yankee in King Arthur’s Court. Denial is always a blessing in disguise, and I remembered how much I craved to have a genuine English breakfast. ‘The Village Idiot’ is a block away from Nomoo and this Yankee headed over for an Anglo-Saxon afternoon.

‘The Village Idiot’ is an ivy-laden pub on Melrose and Martel. Where T.V.s displayed the NFL Draft blare, next to exposed brick and Rorschachian bar decor.

It was my first time having breakfast there, but my third time overall. I forgot it was a place to seat yourself and I followed the server into the kitchen area. She turned around and laughed, saying I can seat myself. The other servers laughed as well and offered me a job since I was back there already.

I eased into a seat and admired the arachnine light fixtures that presided over the buzz of tipsy bargoers and the ballet of pinstriped servers. The server, who saw my astounding confidence, from before named Mia asked for my order while we laughed again about the incident.

Mia is one of the sweetest Midwestern ex-pats to this grand city. She is a singer-songwriter who cares a lot about connection and love. She is also heavily knowledgeable about ‘The Village Idiot.’ She told me they are named for their easy-going philosophy of being goofy and cheery–like that of a village idiot. I figured it had to do with the strength of their cocktails transforming your cognitive senses into those of a Dickens-era vagrant. I asked her about a group of framed photos on the far-wall, which depicted a bunch of nameless kids and other anachronisms. Mia smiled and shared they were photos of the owners growing up. They like to infuse persona into the atmosphere as much as they love to muddle their lime wedges.

The black coffee I glugged was as dark as imperialism and the bloody mary as potent as the guillotine in the Tower of London. Mia brought out the full English breakfast in its tavernesque beauty. Over-medium eggs centered themselves within a motley crew of tomatoes, baked beans, mushrooms, house-cured rasher bacon, a banger and tough sourdough. The milieu of cold-smokestack industrialism meshed with every bite. Mia recommended a splash of brandless hot sauce, which absolutely enhanced the meal. We talked as much as we could without her getting in trouble as I ate. I am happy to say we are friends now, which bodes well for the camaraderie ‘The Village Idiot’ employs in their attitude.

Everything about the breakfast had the right amount of grease, stormy flavor and a comforting whimsical sense to it. I felt as full as five lads in a phone booth.

My craving was satisfied, my need for friendship was equally sated, and I walked into the open air of Melrose’s chaotic commerce, as an out-of-place yankee once again.

If you want classics such as steak and potato pie, ale-steamed mussels, or to just kick back with the silly legacy of beer called ‘Pliny the Elder’ and watch the game, don’t make fun of ‘The Village Idiot.’ Be the village idiot.

‘The Village Idiot’ menus and locations can all be found here: https://www.villageidiotla.com/