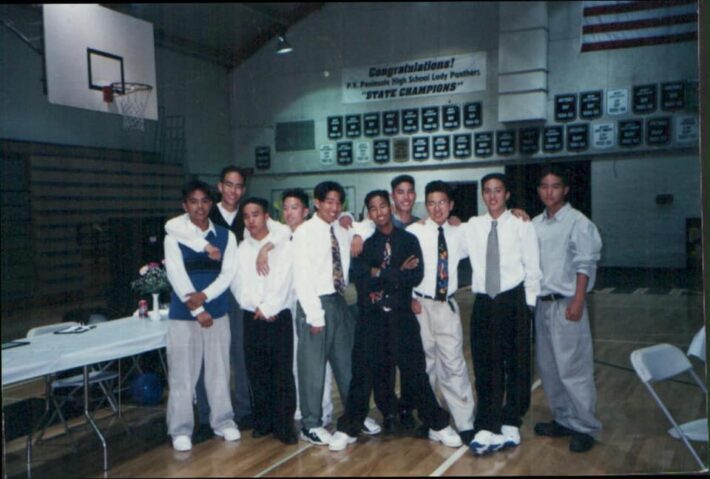 Jason and Arnel approached another faculty member, Mrs. Rosemary Muilenberg, who taught girls choreo, and she gladly agreed to supervise, but in order to get started the student dancers had to come early in the morning before school started at zero period, which was the only time the dance room was available.

For several months, students came early to school at 7:00 am in the morning to just practice dance moves. Mrs. Muilenburg saw that the students were very interested and encouraged them to start doing a routine. She invited their first choreographer, Andre Fuentes, to come by and teach students some breakdancing moves, especially windmills, and also hopefully start a routine too. She paid for the dance instructors with money out of her own pocket, not from the school.

Muilenburg next hired Andre Fuentes from the former Bishop Montgomery team to assist in team development and choreography of routines. Several students began to arrive at school early to practice breakdancing and learn a routine from Andre Fuentes.

By September of 1995, the dance room was crowded and many other students officially joined the team. At the start of the school year, the boys choreo and co-ed team were able to practice during 6th period and even after school instead of having to come in the early morning.

Mike Lim and Arnel Guiang were the first team captains.

As the team got organized, they sought out competitions to join. Miss Dance Drill had the only other boys team at the time, Channel Islands High School. They both had their first competitions against each other. During the 90s, there was a rivalry between Palos Verdes Peninsula and Channel Islands.

Seeing the boys team were getting organized, a group of coed dancers started a team too. Several members of the boys team found dancing partners and a coed team got started by September of 1995.

Most of the original members of the dance team graduated high school by 1997. But many members of the team went to college with a mission to continue dancing.

LeeJ Razalan uniquely joined Kaba Modern at UC Irvine and became a coordinator. Later, he went on to dance on MTV and manage the Beat Freaks, a popular female crew on America’s Best Dance Crew, and the popular Jabbawockeez, America’s most well-known hip-hop dance crew. After the Jabbawockeez, LeeJ managed the Kinjaz and helped manage female breaker Logistx. LeeJ is often sought after as he helps make dancing into a business opportunity for all these dancers.

With the collaborative efforts of Steve Kang, the University of Michigan had established a new dance team.

Andre Fuentes went on to become a famous choreographer, especially being known for choreographing Britney Spears.

As the years passed hundreds of students joined the Palos Verdes Peninsula dance team, and Choreo now counts for sports credit and there are junior varsity and varsity levels.

The dance team began in the 1990s as a hobby for students that just wanted to practice battle moves in a circle at parties, and its essence, goals, and vision are still alive to this date.

Twenty five years later, the son of Kevin Ebilane (1997), Dominic Ebilane, is now the captain of the team. The team really has come full circle.