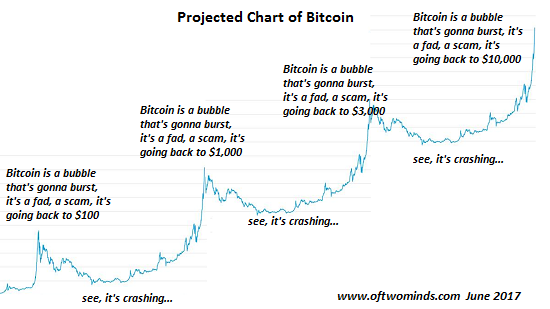 The wild card in cryptocurrencies is the role of Big Institutional Money.
I’ve taken the liberty of preparing a projection of bitcoin’s price action going forward:

You see the primary dynamic is continued skepticism from the mainstream, which owns essentially no cryptocurrency and conventionally views bitcoin and its peers as fads, scams and bubbles that will soon pop as price crashes back to near-zero.Skepticism is always a wise default position to start one’s inquiry, but if no knowledge is being acquired, skepticism quickly morphs into stubborn ignorance.

The primary cryptocurrencies are not a scam. Advertising a flawless Beanie Baby and shipping a defective Beanie Baby is a scam. Advertising a mortgage-backed security as low-risk and delivering a guaranteed-to-default stew of toxic mortgages is a scam.Bitcoin et al. are not the equivalent of Beanie Babies. Cryptocurrencies have utility value. They facilitate international payments for goods and services.
The primary cryptocurrencies (bitcoin, Ethereum and Dash) have transparent rules for emitting currency. The core characteristic of a scam is the asymmetry between what the seller knows (the product is garbage) and what the buyer knows (garsh, this mortgage-backed security is low-risk–look at the rating).
Both buyers and sellers of primary cryptocurrencies are in a WYSIWYG market: what you see is what you get. While a Beanie Baby scam might use cryptocurrencies as a means of exchange, this doesn’t make primary cryptocurrencies a scam, any more than using dollars to transact a scam makes the dollar itself a scam.
Bubbles occur when everyone and their sister is trading/buying into a “hot” market. Bubbles pop when the pool of greater fools willing and able to pay nose-bleed valuations runs dry. In other words, when everyone with the desire and means to buy in and has already bought in, there’s nobody left to buy in at a higher price (except for central banks, of course).
At that point, normal selling quickly pushes prices off the cliff as there is no longer a bid from buyers, only frantic sellers trying to cash in their winnings at the gambling hall.
While a few of my global correspondents own/use the primary cryptocurrencies, and a few speculate in the pool of hundreds of lesser cryptocurrencies, I know of only one friend/ relative /colleague / neighbor who owns cryptocurrency.
When only one of your circle of acquaintances, colleagues, friends, neighbors and extended family own an asset, there is no way that asset can be in a bubble, as the pool of potential buyers is thousands of times larger than the pool of present owners.
I discussed The Network Effect last year: The Network Effect, Jobs and Entrepreneurial Vitality (April 7, 2016):
The Network Effect is expressed mathematically in Metcalfe’s Law: the value of a communications network is proportional to the square of the number of connected devices/users of the system.

The Network Effect cannot be fully captured by Metcalfe’s Law, as the value of the network rises with the number of users in communication with others and with the synergies created by networks of users within the larger network, for example, ecosystems of suppliers and customers.
In other words, the Network Effect is not simply the value created by connected users; more importantly, it is the value created by the information and knowledge shared by users in sub-networks and in the entire network.
This is The Smith Corollary to Metcalfe’s Law: the value of the network is created not just by the number of connected devices/users but by the value of the information and knowledge shared by users in sub-networks and in the entire network.
In the context of the primary cryptocurrencies, the network effect (and The Smith Corollary to Metcalfe’s Law) is one core driver of valuation: the more individuals and organizations that start using cryptocurrencies, the higher the utility value and financial value of those networks (cryptocurrencies).
In other words, cryptocurrencies are not just stores of value and means of exchange–they are networks.
The true potential value of cryptocurrencies will not become visible until the global economy experiences a catastrophic collapse of debt and/or a major fiat currency. These events are already baked into the future, in my view; nothing can possibly alter the eventual collapse of the current debt/credit bubble and the fiat currencies that are being issued to inflate those bubbles.
The skeptics will continue declaring bitcoin a bubble that’s bound to pop at $3,000, $5,000, $10,000 and beyond. When the skeptics fall silent, the potential for a bubble will be in place.
When all the former skeptics start buying in at any price, just to preserve what’s left of their fast-melting purchasing power in other currencies, then we might see the beginning stages of a real bubble.
The wild card in cryptocurrencies is the role of Big Institutional Money. When hedge funds, insurance companies, corporations, investment banks, sovereign wealth funds etc. start adding bitcoin et al. as core institutional holdings, the price may well surprise all but the most giddy prognosticators.

The Network Effect can become geometric/exponential very quickly. It’s something to ponder while researching the subject with a healthy skepticism.