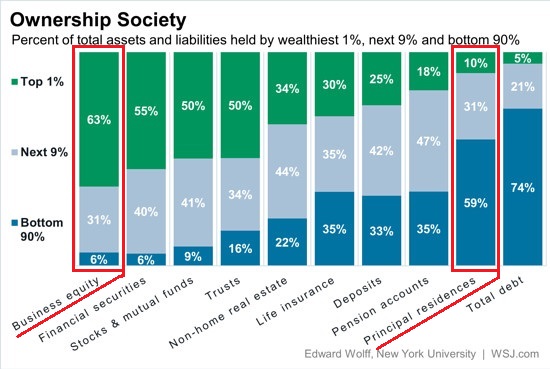 No wonder the “middle class” has lost political power–it has lost the economic power of the ownership of productive assets.
Longtime correspondent Mark G. observed that the key phrase in yesterday’s excellent commentary by correspondent Ron G. is property-owning middle class. Mark wrote: “It appears to me that the income bracket method used today isn’t very informative.”
“The American economy and people are not being served by a government that was designed to be a Democratic Republic, whose architecture and balance of power depended on a property-owning middle class to be the countervailing force against Oligarchy; given the irreversible nature of the market and technology that contributed to the decline of the US middle class, (globalization, automation and AI), it is apparent that we will stay on this downward track of the middle class for the immediate future, and therefore more disparity, dispossession, and coercion will be needed to maintain control, and to me this means a future of intimidation, censorship and continued involuntary servitude.”Here is Ron’s commentary again:
What does property-owning actually mean? to answer that, we have to tease apart earnings, debt and what assets are owned.
The core contradiction in the present-day version of capitalism is between production and consumption: The system must produce goods and services that can be sold at a profit, and there has to be consumers who are able to buy the goods and services.
Over time, the focus in our culture and economy has shifted from production to consumption, and from acquiring capital to credit-funded consumption. The balance between production and consumption is dynamic and can become dangerously asymmetric; if there are only producers and no consumers, the goods and services pile up unsold and enterprises go bankrupt. If there are only consumers and no producers, the system eats its seed corn (capital) and sinks into impoverishment.
As Mark noted, the income of a household reflects very little of this distinction.Many households enjoy incomes above $100,000 annually but they own essentially nothing. By income alone, we categorize the household as “middle class.”
But if we consider their total debt load, their ownership of income-producing assets and assets they own free and clear–essentially nothing–then they must be re-categorized as well-paid proletarians.
So what happens when we redefine the qualifications of “middle class” from what you earn and owe to what you own free and clear that generates income?How many American households qualify as “middle class” under this new definition?
Under this new definition, every household one housing-bubble-burst away from the destruction of their home-equity “wealth” isn’t really middle class.Neither are households a paycheck or two away from insolvency.
Compare this to what the wealthy own. Note that the bottom 90%’s assets are largely the family home, an asset which is offset by a heavy burden of debt. The wealthy own income-producing assets: business equity, stocks, bonds, trusts and rental real estate.

No wonder the “middle class” has lost political power–it has lost the economic power of the ownership of productive assets, which is the foundation of political power. A class of well-paid proletarians burdened with debt is not middle class –it is a class of debt-serfs who have been persuaded that debt-fueled consumption is wealth because this delusion is politically useful to the self-serving elites who own the wealth and thus the power.

Mark’s conclusion is sobering: “With no genuine middle class exerting power we are left merely with competing groups of oligarchs, with both groups recruiting supporters in the plebeian “mob”.   This most resembles Rome  when the Republic was breaking down.  I would therefore not rule out civil war, or even a political partition.   Proletarians have much less to lose in such an event than a real middle class.”