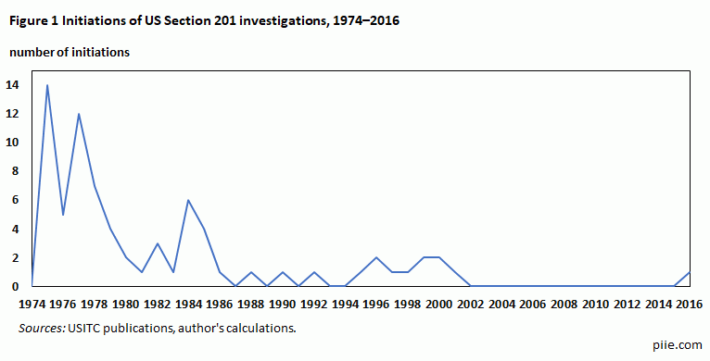 President Trump is about to decide whether to escalate the pressure on leading trade partners of the United States, at the risk of precipitating more conflicts in the trade arena. Employing a section of the 1974 Trade Act, he faces two separate decisions about whether to impose safeguards—potentially tariffs or quotas—on imports. The countries most likely to be affected in these decisions include South Korea, Malaysia, Japan, Mexico, Thailand, and Vietnam, but Trump’s actions have broad implications for his overall aggressive stance on trade. This blog post provides an explanation of the basis of Trump’s likely actions and the potential consequences.
In the first decision, the president must rule by January 12 on policies that could affect $8.5 billion of imports of solar panels. In the second, by February 3, he is to decide on actions impacting $1.8 billion of imports of washing machines. Such actions could well affect the price that consumers pay for both items.
Under Section 201 of the Trade Act of 1974, the US International Trade Commission (USITC) has already completed its investigation in both cases and found that the complaining US companies were injured by imports, giving the president the authority to impose new trade barriers. In the case of solar panel imports, the USITC voted on October 31 to recommend that Trump impose tariffs and quotas.
Imports in these cases are much larger in magnitude than the historical norm in these types of investigations. Although the law has been around for decades, recent presidents have rarely invoked it. No tariffs or quotas have been imposed under this law in a long time. In the past, presidents who have had the opportunity to use Section 201 have elected not to do so for various reasons—often because they feared consumers would be hit or that there would be retaliation. Trump’s potential willingness to invoke Section 201 could thus foreshadow many more confrontations over trade in a myriad of cases.
Historical outcomes arising under Section 201, 1974–2016
Figure 1 illustrates the frequency of Section 201 investigations over the period 1974–2016. Of the 74 total investigations, roughly 80 percent took place between 1974 and 1985. The last Section 201 case that resulted in a complete investigation was initiated in 2001.[1]

Table 1 summarizes key elements of the 74 investigations initiated under Section 201 between 1974 and 2016. Just as in the solar and washing machine investigations, American companies, trade associations, or labor unions have brought forward most of the requests for import protection under this law. In only 10 of the 74 cases has the US government self-initiated an investigation without a petition from the private sector.
Table 1 Use of Section 201 of the Trade Act of 1974, 1974–2016

Total
Affirmative vote
Tie vote
Trade barrier
Type of trade barrier
Tariff only
Quota only
TRQ only
VER only
Tariff and TRQ
Quota and  VER
Tariff, Quota, and VER
Total investigations
74
35
5
19
7
2
4
3
1
1
1
… initiated by domestic industry, trade association, union
64
27
5
14
6
1
4
2
0
1
0
… self-initiated (i.e., by the US government)
10
8
0
5
1
1
0
1
1
0
1
TRQ = tariff rate quota; VER = voluntary export restraint
Sources: USITC publications, author’s calculations.
Under Section 201, the USITC is tasked with investigating whether the domestic industry is injured by imports. The six commissioners then conduct a vote—a negative (no injury by imports) vote ends the case. On the other hand, an affirmative or tie vote gives the president the green light to implement a policy response. In 40 of the 74 investigations, the USITC vote was either an affirmative or tie, thereby opening the door for presidential policy action.[2] When the USITC vote gives the president the right to proceed with a policy action, the Section 201 law provides a range of different options. The president can implement many types of trade barriers, including import tariffs, quantitative restrictions, or negotiate voluntary export restraints (VERs) with the foreign source of the imports. Alternatively, the law also permits the president to decline to impose trade barriers entirely. The president is also authorized to trigger forward-looking policies that would assist workers out of declining facilities and into other areas of the economy that are growing.
Indeed, past presidents have implemented trade barriers in only 19 of the 40 cases in which an affirmative or tie vote provided the opportunity to implement protection between 1974 and 2016. This low yield is one reason why Section 201 has been used less frequently than laws like antidumping and countervailing duties. Under those other laws, the president plays no role. Thus, an USITC finding of injury coupled with Department of Commerce rulings of unfairly low prices (antidumping) or foreign subsidies (countervailing duties) almost automatically leads to new import restrictions.
The 19 historical cases in which the president has imposed some form of import protection have resulted in a variety of restrictions. Tariffs and quotas—or some combination thereof—are the most common outcome. A handful of cases have resulted in the negotiation of a VER, but the last one of these was in 1984. One reason why this outcome has declined in popularity is that VERs were explicitly discouraged under the 1995 World Trade Organization’s (WTO) Agreement on Safeguards. Taking VERs off the table may have also contributed to the recent unpopularity of Section 201.[3] Table 2 provides additional information on the 19 historical cases in which the president implemented trade barriers after a Section 201 investigation.
Table 2 Section 201 investigations resulting in trade barriers, 1974–2016
Year
Case No.
Description
Imports(2016 billions of dollars)
USITC determination
Outcome
2001
201-073
Steel
13.3
A
Tariffs, TRQ
1984
201-051
Carbon and certain alloy steel products
6.8
A
VER, Steel Import Stabilization Act*
1976
201-018
Footwear
4.7
A
VER with China and South Korea
1976
201-019
Television receivers
3.4
A
VER with Japan
1977
201-029
Citizens band (CB) radio transceivers
3.3
A
Tariffs
1999
201-069
Certain steel wire rod
1.1
T
TRQ
1978
201-037
Bolts nuts and large screws of iron or steel
0.9
A
Tariffs
1975
201-005
Stainless steel and alloy tool steel
0.8
A
Quota, VER with Japan
1982
201-047
Heavyweight motorcycles engines and powertrains
0.7
A
TRQ
1982
201-048
Stainless steel and alloy tool steel
0.6
A
Quota, tariffs, and VER**
1980
201-043
Mushrooms
0.3
A
Tariffs
1979
201-039
Nonelectric cookingware
0.3
A
Tariffs
1985
201-056
Wood shingles and shakes
0.3
A
Tariffs
1978
201-035
High-carbon ferrochromium
0.2
A
Tariffs
1999
201-070
Circular welded carbon quality line pipe
0.2
A
TRQ
1998
201-068
Lamb meat
0.2
A
TRQ
1997
201-067
Wheat gluten
0.1
A
Quota
1996
201-065
Broom corn brooms
<0.1
A
Tariffs
1978
201-036
Clothespins
<0.1
A
Quota
Year =  year of initiation of investigation; A = affirmative, T = tie; TRQ = tariff rate quota; VER = voluntary export restraint
Note: *Separate, but related to the Steel safeguard, President Reagan established a government policy that resulted in voluntary export restraints and the Steel Import Stabilization Act.  ** President directed the US Trade Representative to  negotiated VER.
Sources: USITC publications, Bureau of Labor Standars (BLS) Import Price Indices, BLS Historical CPI, author’s calculations.
In constant dollar terms, solar panels and washing machines would be the third ($8.5 billion) and seventh ($1.8 billion) largest import value cases, respectively, under the law’s history to result in trade barriers. The only two cases larger than solar panels were the steel investigation of 2001 and a carbon and alloy steel case of 1984. Over 1974–2016, the median size of imports in cases in which the president imposed trade barriers was only $600 million. Thirteen of the 19 cases to result in trade barriers involved investigations of less than $1 billion of imports.
The Costs of Trade Barriers
Historically, presidents have been reticent to implement trade barriers under Section 201—even when presented with the legal authority to do so—for many reasons.
The first is the cost to the American economy. Import restrictions would increase the price of solar panels and washing machines to US consumers. In the case of solar, this would retard development of clean energy and negatively impact downstream employment prospects in solar panel distribution and installation.
The second is the international ramifications. Adversely affected trading partners may seek compensation for new US import restrictions that curtail their exports. This could arise via a formal WTO dispute, if not through alternative means of retaliation that hurts other US companies and workers.
The third is that it sends the signal to other American industries that the president is eager to grant discretionary trade protection. This could result in a flood of such requests. These will further increase business uncertainty, impose even more costs on the US economy, and increase the scope of trading partner retaliation.
President Trump would be well advised to consider the historical record. By reflecting on the greater American economic interests, many prior administrations have refused to take the bait of granting temporary, ineffective, and costly trade protection.
Notes
1. In April 2016, the United Steelworkers union initiated a Section 201 investigation into unwrought aluminum imports but withdrew the case just days later without an investigation.
2. Not all the remaining 34 investigations ended in a negative vote. In some instances, the investigations were terminated or withdrawn by the petitioners before a vote was conducted.
3. See Chad P. Bown “Why Are Safeguards under the WTO So Unpopular?” World Trade Review 1, no. 1 (March 2002): 47-62.
the contributors at the Peterson Institute: https://piie.com/blogs/trade-investment-policy-watch/solar-and-washing-machine-safeguards-context-history-us-section [