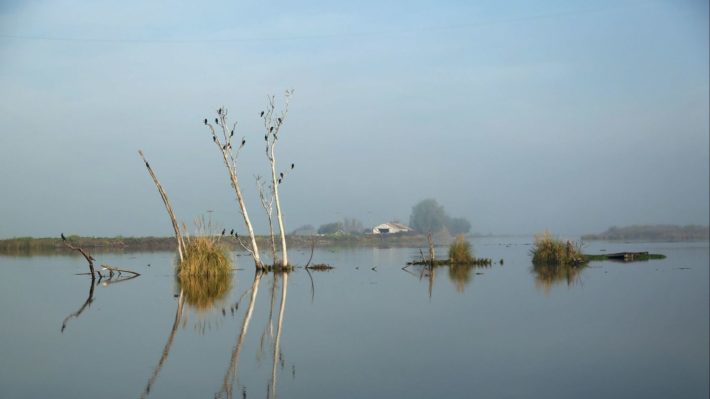 It is time to imagine a California bereft of its most wondrous natural assets, from the giant sequoia to the coast redwoods to the Sacramento-San Joaquin River Delta — the largest and most ecologically diverse estuary on the west coast of both American continents — to the migrating salmon whose journey begins in the Sierra and runs down the great Central Valley rivers to the Pacific in seasonal pulses of rainfall and snowmelt. All are on the brink of oblivion.

Climate change is shifting the state’s hydrology northward, bringing Baja-like temperatures and precipitation patterns to Southern California and pushing L.A. weather up the slopes, where snowcaps are smaller and melt faster. We cross our fingers and hope the landscape can demonstrate enough resilience to keep the state beautiful, productive and alive; but all the while we undermine nature’s efforts with our profligate use of water.

Nine years ago, talks began among farmers, water managers and environmental advocates about how to salvage four key salmon river-highways and the Delta without completely drying up the nation’s most productive farmland, or leaving cities like Los Angeles or San Jose with too little water for human needs. The consensus among biologists and hydrologists was that the Tuolumne, Stanislaus and Merced rivers — the three key veins that feed the San Joaquin River on its trip north to the Delta — could survive and sustain migrating salmon if diversions to fields and homes were sufficiently curbed to leave the rivers 60% of their natural flow.

Why does courage fail when it requires curbing our thirst and adjusting the state’s plumbing?

But that would mean much less water would be available for crops than has been taken in recent decades. As a long drought gripped the San Joaquin Valley, agricultural interests pushed back against the proposed cutbacks. So water regulators proposed a compromise. Leave the rivers and the salmon only 40% of what they would get without diversions.

Environmentalists protested that the smaller number would fall far short of what science says the rivers need. But the 40% proposal moved earlier this year to the State Water Resources Control Board for a decision. Gov. Jerry Brown and Gov.-elect Gavin Newsom urged the board to delay its vote long enough to allow discussion of alternatives. The decision is now set for Wednesday.

In the meantime, Brown offered his support for a federal bill to extend a law that weakens environmental protections and lets farmers take more water; the move would help them weather the drought, even though the drought is now over.

How can California both divert more water from its rivers and divert less? Support for the federal bill seems to signal a weakening of support for decisive action by the Water Board to protect the rivers. It is perhaps a result of pressure from the science-denying Trump administration, which until recently called climate change a hoax, and that California water practices have somehow left firefighters with empty hoses.

Brown and California have been courageous leaders on one climate change battlefield — the atmosphere. The state and its leader have embraced science, rejected the deniers and enacted laws that seek to limit the emission of greenhouse gases.

Yet on another climate change battlefield, California seems weak and irresolute. Why does courage fail when it requires curbing our thirst and adjusting the state’s plumbing? What kind of credit do we deserve for trying to stem emissions if we willingly preside over the extinction of our salmon runs and death of our rivers because saving them is inconvenient?

Looming in the background, in the final days of the second Brown administration, are the governor’s proposed tunnels to divert Sacramento water around the Delta to points south. The Trump administration has the power to kill the tunnels, and may be holding them as leverage to ensure that water needed to sustain rivers, salmon and the Delta is instead diverted to almond groves.

Brown’s tunnels would help the state keep up with the changing climate. Southern Californians need them — but they also need a thriving Delta and living rivers to feed it. They should support the Water Board’s plan to partially restore flows. And they should urge the incoming governor to battle the Trump administration on water, just as the current governor has done on the atmosphere.