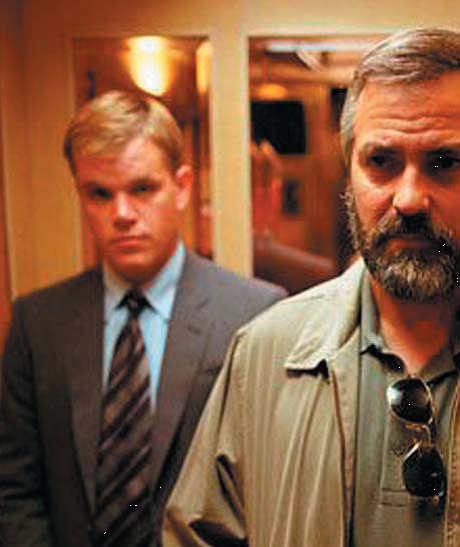 In the political thriller Syriana, George Clooney  (Good Night and Good Luck, Oceans 12) embraces the role of his career, that of CIA agent Bob Barnes, who is winding down from more than 20 years of service mostly spent in places where he can use Farsi and Arabic. He seems to  want one last hoorah, to leave an indelible mark, before throwing in the towel, which in his case would translate to a desk job. In the process,  he loses track of a missile.

Young energy market analyst Bryan Woodman (Matt Damon, Oceans 12, The Bourne Identity), on the other hand, is in his prime, reporting from an overseas syndicate on how oil investments affect societies.

Though Syriana, a term used by the intelligence community for a prototype Middle Eastern democracy, depicts multiple thought-provoking sides of a complex oil-rich fence, to some, Stephen Gaghan’s (Traffic) brilliant screenplay, taken from Robert Baer’s book, See No Evil: The True Story of a Ground Soldier, seems somewhat preachy.

However, Syriana is a sermon worth heeding.

The film’s central message—how everything related to empowering the Middle East is inter-connected— is delivered by a bloated George Clooney (he gained 35 pounds to blend into the complex story) and a commodities-friendly Matt Damon (in a gut grabbing role that could be Will Hunting (Good Will Hunting) resurrected, only now he’s in his 30s, is married with kids, and has a cool job based in Geneva).

Through a chance meeting, Damon’s analyst interfaces with Prince Nasir Al-Subaai (Alexander Siddig, Kingdom of Heaven), possibly the future emir, who befriends Damon in an effort to flesh out his ideological plans for a better use of profits for his country from the sale of oil.

The plot thickens as the oil flows into deep pockets formed through greedy mergers anxious to slurp up profits for their own interests.

Jeffrey Wright’s (Basquiat) Bennett Holiday, who wields an expressionless high-powered attorney in search of “an illusion of due diligence,” with respect to mergers and acquisitions for one of their clients involved in an oil deal, gives the film a gritty texture reminiscent of the cold war conspiracy theories that abounded then but seem to have been flourishing all along.

Added to the mix of Gaghan’s superior direction is a would-be suicide bomber Wasim Kahn (Mazhar Munir), playing an out-of-work migrant from Pakistan who becomes privy through a radical cleric to Clooney’s missing missile, the Royals (including the outgoing emir and his two prince sons vying for the title), and those who practice international law, the lead of which is played unrelentingly by veteran actor Christopher Plummer (The Sound of Music) to promote global oil deals (headed by Chris Cooper, American Beauty, Jarhead) closely watched by the State Department. Syriana is that rare film that demands its audience participate. Gus Van Sant’s Exotica comes to mind; in that film, the players were all somehow intertwined, too, in surprising and unexpected ways.

Shot through the lens of hand held cameras that add a film noir effect, watching Syriana’s woven parallel under-stories plot through its diverse density of players is like watching a masterpiece unfold. It’s as though Gaghan is directing viewers from his special place behind each intriguing scene to catch the irony of feigned current events, including a painful torture scene.

From Wasim’s clichéd disillusionment, the life of a suicider always sad yet somehow understandable in terms of the seductiveness of religious fervor that lures so many to heaven’s gate prematurely, to the unexpected death of a young American who suffers a freak accident, Syriana makes clear that people of the world are made of the same stuff.

Everything is truly connected—the bomber and the prince, the legalese players and oil capitalists, the analyst and the agent, all performing according to plan in a mishandled world of unleveled playing fields.

specialist, and editor of international engineering reports for Italian, Polish and Iraqi projects, with film projects in development.