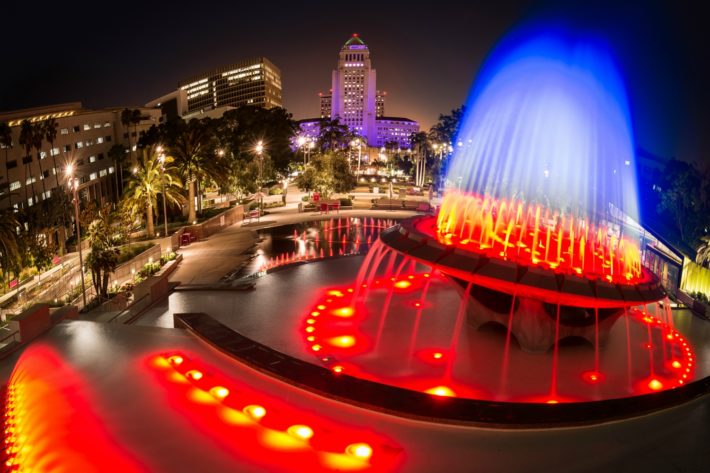 We’re hurtling toward the holidays faster than a fat guy in a flying sled, so you’ve got to take some time to enjoy L.A. before the onslaught of airport layovers and family dinners commences. Here’s some of the best stuff to do in L.A. this weekend, from rooftop movie screenings to Stevie Wonder’s annual charity event.

Bundle up and head to a number of L.A. rooftops to catch screenings of your favorite seasonal films. Barring inclement weather, the org has the following flicks on tap this weekend:

There are the luminarias that line your driveway, and then there are the gargantuan lanterns on display at the Los Angeles County Arboretum. Artists from China’s Sichuan province teamed with the Arcadia institution on a mile-long museum of massive silk creations, from twinkling dragons and pandas to radiant flowers. Book a timed ticket for the late afternoon, then grab dinner and drinks from the food trucks and bars on-site.

Getting a picture with Santa is cool and all, but everyone knows Rudolph is the real celebrity. A whole herd of reindeer (including precious new baby Nutmeg, pictured above) takes up temporary lodging in the L.A. Zoo’s Reindeer Village, where photo ops abound. While you’re there, scope out the sparkling Zoo Lights displays, also on view through January 6.

Hop on the Red or Purple Line and get off at the Civic Center/Grand Park station, where a 12-acre art and projection display awaits. You’ll see DTLA’s park of record awash in light installations, from its iconic fountain to its winding pathways.

For the Record, a troupe that takes beloved film scores and turns them into immersive live shows, is back with a very Christmassy iteration. Head to the Wallis Annenberg Center for the Performing Arts to see the music of Love Actually come to life, from Joni Mitchell’s “Both Sides Now” to Mariah Carey’s inescapable hit “All I Want for Christmas Is You.”

You’ve still got a few days to catch some stellar films at this independent fest hosted at Cinemark 18. Take our word for it and grab tickets to Saturday’s 10 a.m. screening of Blissful at Zero, a heart-rending documentary about 33-year-old Angeleno Nicole Tupper and the terminal cancer diagnosis that can’t get her down.

Stevie Wonder’s annual charity event returns to Staples Center for a night of cheer. As usual, the legend will be joined onstage by an all-star lineup—last year it was Tony Bennett and Pharrell—and asks that concertgoers bring an unwrapped gift for children and families in need.

The oceanside town’s annual fireworks spectacular returns for a 29th year. The main event starts at 7 p.m., but show up at 4 p.m. for a snow park, live music, and a Santa float. Pro tip: Park near Marine Avenue and mosey the Strand to avoid congestion downtown.