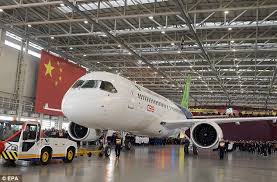 This worthy and public-spirited column seldom dives into the thickets of military hardware, which it regards as excessively technical. However, the arms race between China and Washington is of enough gravity that its more exotic armaments may be of interest. Herewith, the truly dangerous weaponry of the contending sides.

C-919 A Chinese narrow-body intended to compete with the Airbus A320 and the Boeing 737. Designed and built in China by Comarc. Not quite up to Boeing’s standards, not as fuel-efficient, uses a lot of Western-manufactured parts. (Think  of it as a 1966 Toyota with wings, nothing to worry about.)  Comarc has 570  orders for the 919, almost entirely in China. That’s 570  orders nobody else will get. The domestic market will provide the oomph to improve. By 2024 China is projected to be the world’s largest market for airliners.
Not to worry. They can’t innovate.

US Nuclear Weapon Upgrade Program: “CBO estimates that nuclear forces will cost $348 billion between FY 2015 and FY 2024. Three independent estimates put the expected total cost over the next 30 years at as much as $1 trillion.”
Artist’s conception of planned $100 Billion Chinese-Made City in Malaysia. Near Singapore “Scares the Hell Out of Everybody.” Will have 700,000 people, almost entirely Chinese. Pundits assert that in twenty years China will own Malaysia.The Gerald R. Ford, $12.8 billion + $4.7 billion R&D (estimated). The Navy wants ten.

Sunway TaihuLight, World’s most powerful supercomputer, a Chinese design built with Chinese silicon. China leads the planet in supercomputers, both in power and numbers.

The B21. Yes, there is a seat for Robin.
The B21 is a new thermonuclear bomber for  the Air Force. “The head of the U.S. Air Force Global Strike Command… envisions some 175–200 bombers in service.[8] Initial operating capability is expected to be reached by 2030. ”at a cost of $550 million each (2010 dollars).
It was rumored that Armour Star would be the lead contractor for the B21, but this was cancelled as being unduly candid.  The B21 will funnel huge amounts of money to Northrop-Grumman and, in the event of a thermonuclear war, will arrive at the bubbling remains of targets several hours after the Navy’s D5 Trident II missiles get there. The aircraft relies on the assumption that, in thirteen years when it enters service, anti-stealth technology will not have reached the point of making it even more obviously useless.
This marvelous revelation from Wikipedia: “In July 2016, the U.S. Air Force stated they would not release the estimated cost for the B-21 contract with Northrop Grumman. The Air Force argued releasing the cost would reveal too much information about the classified project to potential adversaries.”  As, for example, taxpayers

One accepts yuan. The other doesn’t. Can you guess?