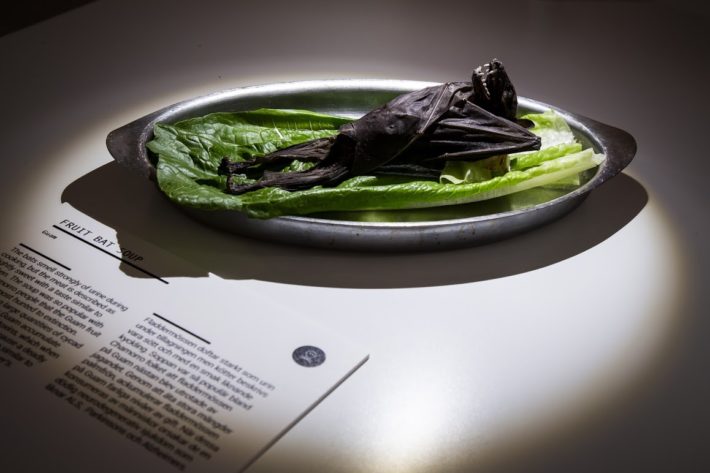 Escargot. Cow brains. Turtle soup. Rocky Mountain oysters. Depending where a person’s from and what culture they were raised in, these foods either sound delicious or supremely unappetizing. Then again, lots of Americans subsist on deep-fried nuggets of molded pink meat slime, so what qualifies as disgusting is pretty subjective. But there’s an old rule of thumb in the food world: Never yuck someone else’s yum.

The newly opened Disgusting Food Museum subverts that rule in the name of challenging people’s notions of what is and isn’t edible, exploring the nature of disgust, and, supposedly, “[helping] us embrace the environmentally sustainable foods of the future.” The exhibit, which originally debuted in Sweden, is the brainchild of Dr. Samuel West, the psychologist behind last year’s Museum of Failure, also hosted by the A+D Architecture and Design Museum downtown.

Approximately 80 foods—from moderately divisive “local” items like licorice, root beer, and Twinkies to cultural delicacies that might be more obscure to an American audience—are on display to be seen, smelled, and, in some cases, even tasted. Here are some examples of the foods you’ll find on display—but don’t call them disgusting. Because that would be gross. 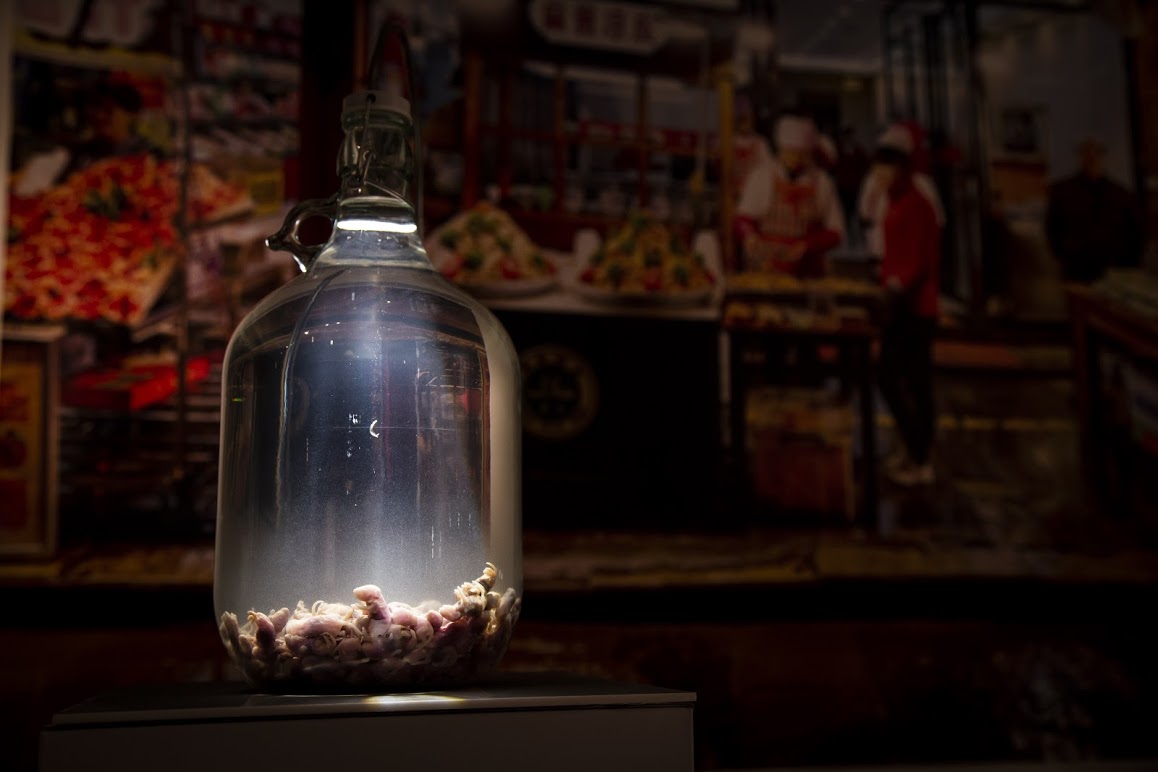 Consumed in China as a health tonic for ailments including asthma and liver diseases, the drink recipe requires a handful of day-old, blind, and hairless baby mice that are drowned in a vat of rice wine and aged for up to a year. Critics have described the brew as tasting like gasoline, with an aftertaste of rotting animals (which makes sense). The smell is pungent and not for the faint of heart. Don’t expect to find this concoction on the wine list of your local Chinese joint.

Yep, there is definitely something floating in that yellow liquid. The literal translation of “head and hoof soup,” this Iranian comfort food is considered to be a good hangover cure. To prepare the dish, a sheep’s aforementioned parts must first be soaked in cold water for several days, then boiled overnight to remove their odors. While the eyeballs are oily and the tongue powdery, the sheep’s brain is fleshy and tastes like the bouillon base that it was soaked in. Sound pretty good? Kale Pache is available at some of L.A.’s Persian restaurants.

Also known as a “Mongolian Mary,” this concoction is prepared using tomato juice and pickled sheep eyeballs, and is a hangover helper said to Genghis Khan. The jelly-like organs suspended in the drink are said to be highly nutritious when consumed in generous helpings. 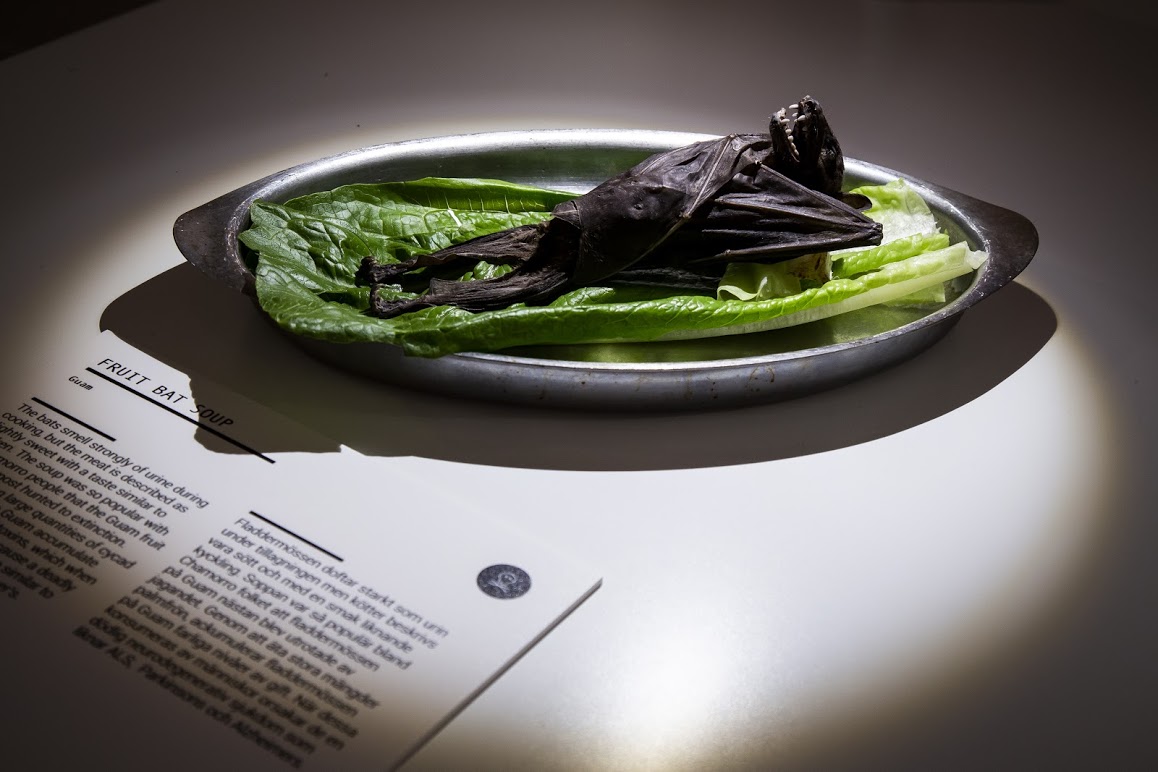 This delicacy from Guam may reek heavily of urine, but the sweet, final product is purportedly so rewarding that the native Chamorro people had nearly hunted the flying mammal to extinction. Exotic food connoisseurs beware—the bats can be carriers of dangerous toxins which, when consumed by humans, may lead to neurodegenerative disease.

And you thought you would make it through this list without any discussion of genitals. Valued for its purported health benefits and aphrodisiac properties, this Chinese dish is more about texture than taste. Fatty and a little slimy, the phallus is sliced right down the urethra, then washed to remove urine and left to boil for an extended period of time. So-called bull penis experts believe that women should consume the whiter meat, leaving the darker parts to be enjoyed only by men.

There is an array of pungent fromages to be investigated at the museum’s “Altar of Stinky Cheeses.” Among them is Sardinia’s maggot-infested Pecorino. The process begins when an entire wheel of the fermented sheep’s milk is left outside so flies can lay their eggs within. The resulting larvae will then feed on its sustenance and produce excremental leftovers of a partially digested, mushy cheese. Eating the maggots is optional and requires much caution since they may survive being masticated and make their way into diners’ intestines. For safety reasons, Casu Marzu is banned in Italy and the rest of European Union. OK, fine. Kind of gross.

The Disgusting Food Museum is open through Feb. 17 at the A+D Architecture and Design Museum, 900 E. 4th St., downtown; disgustingfoodmuseum.com.