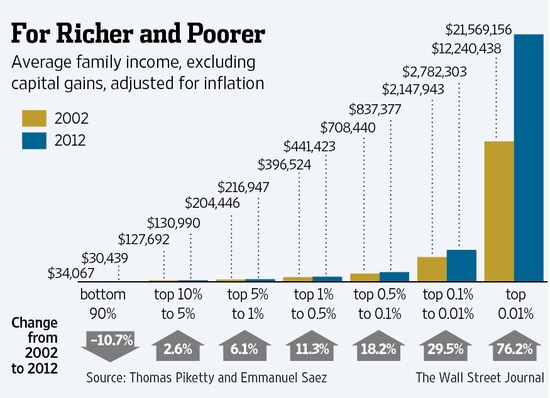 The “fixes” to the stagnation of postwar Capitalism in the 1970s were financialization, globalism, and the sustained expansion of debt–all have run out of steam.
Many of us have written about cycles in the past decade: Kondratieff economic cycles, business/credit cycles, the Strauss–Howe generational theory (an existential national crisis arises every four generations, as described in their book The Fourth Turning), and long-wave cycles of growth and decline, as described in seminal books such as The Great Wave: Price Revolutions and the Rhythm of History and War and Peace and War: The Rise and Fall of Empires.

There is another Rhythm of American History that few recognize: the economic, social and political crises sparked by exploitive Elites. There are two dynamics that drive these crises:
1. The exploitation of commoners by financial/political Elites reaches extremes that create systemic instability as commoners no longer have the means to improve their conditions.
2. The economic mode of production that generated Elite wealth no longer functions, but the Elites cling to the failing system and enforce it with increasingly violent suppression of dissent.
Here are the previous Crises of Exploitive Elites:
1. Slavery, 1850 to 1865. Though the toxins generated by slavery are still with us, the existential political, social and economic crisis arose in the years between 1850 and the end of the Civil War in 1865.
In broad brush, the rise of the American West triggered a political crisis in the U.S. as the southern states realized the non-slave West’s rising political power would doom the fragile balance between the non-slave Northern industrial-economy states and the cotton/agricultural slave-economy South.
It was a trend the South couldn’t possibly win, but the South’s exploitive Elites refused to concede any of their power–and that refusal to adapt tp changing conditions guaranteed the Civil War.
The first Industrial Revolution radically transformed the source of wealth creation. The plantation agrarian mode of production of the South was eclipsed by the vast wealth-generating might of the rapidly industrializing North.
The Southern political and economic Elites could not win economically or politically, so they attempted a military solution–a war they might have won had it not been for the Westerners Lincoln, Grant and Sherman. (Lincoln was born and raised in the frontiers of Kentucky, Indiana and Illinois; both Grant and Sherman were born in Ohio and served in Army postings along the West Coast.)
The moral tide was rising against slavery. The Christian world had long been divided on the issue of slavery, but the tide turned against slavery in the early-to-mid-1800s, both in Great Britain an the U.S. Moral turnings are powerful instigators of political crises, and once again the Southern Elites attempted to stem this tide with military force.
2. The Crisis of Gilded-Age Exploitation, 1892 to 1914. The dates of this crisis are inexact and open to interpretation, but in broad brush, the Second Industrial Revolution (mass production, integrated industrial corporations, the rising dominance of Finance and Industrial Capital, emergence of monopolies and cartels, etc.) forced millions of commoners into the penury of wage-labor while concentrating the gains of capital and speculation into the hands of the few.
Adjusted for inflation, the wealth of the financier-industrialists in this era exceeds the wealth of today’s billionaires, and is on par with the extremes of wealth concentration that characterize the last stages of the Roman Empire.
Commoners attempting to unionize were brutally suppressed by hired private enforcers and the police/military forces of the American government. Radical unions such as the I.W.W. (Industrial Workers of the World, a.k.a. Wobblies) were destroyed by coordinated, concerted government suppression, much of it by means that are visibly illegal by today’s standards.
The conflict between exploited industrial labor and politically dominant Capital was eventually resolved by progressive anti-trust laws (aided by President Theodore Roosevelt) and the beginnings of social rights and welfare programs–universal education, limits on hours worked per week, etc.
3. The Great Depression and the Failure of Debt-Based Capitalism, 1929 to 1941. Capital was increasingly concentrated in the hands of the Elites in the Roaring 20s, but the commoners had new access to the financial magic of credit: banks sprouted by the thousands, anxious to loan money to fund the purchase of more farmland, new autos, and all the other output of a consumerist economy.
But alas, credit is not collateral, nor is it wealth. When the debt bubble burst, so did the stock market, which was based on highly leveraged margin debt.
The Elite financiers resisted writing down the debt that had made them so rich, and as a result the Depression dragged on, immiserating millions who then turned to fascism or radical socialism as the political fixes to the systemic exploitation and dominance of Elites.
4. Civil Rights and Global Empire, 1954 to 1973. The legacy of slavery’s oppression had lingered on for almost 100 years, and the rising prosperity of the 1950s and 60s generated a social, moral, political and economic movement to throw off the most oppressive aspects of an exploitive social/political order.
At the same time, the costs of maintaining a Global Empire were raised to a boiling point by the war in Vietnam, which destabilized the moral, political, social and economic orders.
In response the Elites instigated waves of violent, suppressive state tactics designed to disrupt and destroy the organized dissent of social movements. These tactics included the FBI’s COINTELPRO programs as well as other blatantly illegal, heavy-handed government enforcement of the dominance of exploitive Elites.
I’ve written extensively about state over-reach and illegal suppression of dissent: remember, the state exists to enforce the dominance of Elites: everything else is propaganda, misdirection and obfuscation.
Welcome to the United States of Orwell, Part 3: We had to Destroy Democracy in Order to Save It (March 28, 2012)
State Over-Reach: Stripmining the Citizenry for Fun and Profit (November 13, 2009)
When It Becomes Serious, First They Lie–When That Fails, They Arrest You (March 16, 2015)
For more on COINTELPRO, please read War at Home: Covert action against U.S. activists and what we can do about it.
Simply put: when lies no longer work, the government devotes its resources not to eliminating wars of choice, cronyism and corruption but to suppressing dissent and resistance to those extractive, exploitive policies.
Which brings us to the present-day Crisis of Exploitive Elites. The “fixes” to the stagnation of postwar Elite/state-dominated Capitalism in the 1970s were financialization, globalism, and the sustained expansion of debt in all sectors–state, corporate and household.
Now all three engines of “growth” have run out of steam. All three greatly exacerbated wealth and income inequality, as these two charts reveal:

Once again, the political and economic Elites are resisting the tides that are undermining their Empires of Debt and Exploitation. The Elite-controlled Corporate Media has been ordered to War Status, an DefCon-5 emergency requiring an endless spew of all-out propaganda designed to distract, disrupt and destroy organized dissent and any resistance to the dominance of Exploitive political and financial Elites.
The Exploitive Elites cannot turn back the clock, so they cling to their failed “fixes” and demand our compliance.
The Exploitive Elites cannot turn back the tides of history, but they can immiserate millions. That seems to be “solution” enough for them, but you cannot destroy rising moral revulsion to soaring inequality and the abject failure of debt-based global capitalism with mere media propaganda.
Of related interest:
Coming Apart: The Imperial City At The Brink
The U.S. Is Where the Rich Are the Richest
The Pin To Pop This Mother Of All Bubbles?
by  .
and    audiobook) For more,   essentials website.