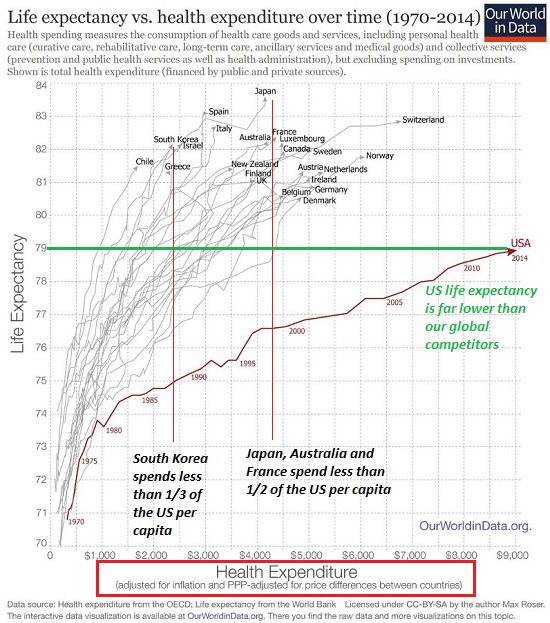 The only way to systemically lower costs is to make prevention and transparency the top priorities.
As I have been noting for a decade, the broken U.S. healthcare system will bankrupt the nation all by itself. We all know the basic facts: the system delivers uneven results in terms of improving health and life expectancy while costing two or three times more per person compared to our advanced-economy global competitors.
This chart says it all: the global outlier in low life expectancy and exorbitant cost is the U.S.

The profit motive is supposed to lower costs, not increase them. In the idealized model of a completely free market, the profit motive is supposed to lower costs as customers are free to choose the best product/service for the lowest price.
In U.S. healthcare, the profits are stupendous, yet the costs are even more stupendous. Rather than lower costs, the U.S. system of for-profit healthcare has sent costs spiraling into the stratosphere, to the point that the system’s costs are threatening to bankrupt the government and the nation.
Why is this so? Karl Marx provided the answer in the 19th century. In the idealized model of free-market capitalism, those who provide superior services for the lowest price reap more profit than their less agile/productive competitors.
But as Marx observed, in real-world capitalism, open competition drives profits to zero. Every attempt to gain a competitive advantage in price increases supply and further commoditizes the product/service. This dynamic pushes prices down to the point that nobody can make a profit until competitors are driven out of business and a cartel or monopoly secures the market and controls supply, price and profit.
The most profitable structures in real-world capitalism are monopolies or cartels– which is precisely what characterizes U.S. healthcare. The only way to maximize profits is to ruthlessly eliminate competition in the marketplace–which is exactly how the U.S. healthcare system operates: the pharmaceutical industry is a cartel, hospital chains are a cartel, insurance companies are a cartel, and so on.
In the real world of state-cartel-capitalism, competition is eliminated so cartels can maximize profits.
Do-gooders are always claiming that the system could be fixed by re-introducing competition– this was the core idea behind Obamacare’s insurance exchanges–but the do-gooders are blind to the core dynamic of state-cartel-capitalism, which is cartels own the machinery of governance via lobbying and campaign contributions. The state creates and protects the cartels, period.
In state-cartel-capitalism, there is no way to maintain real competition, as the cartels instruct the state to protect their monopolies/cartels. State reformers can try all sorts of complex reform schemes (ObamaCare) but they fail to lower costs because they all leave the cartel structure and cartel ownership of governance intact.
In the good old days of the 1950s and 1960s, U.S. healthcare was more localized, and the central state (federal government) wasn’t the Sugar Daddy for the cartels. Hospitals were community hospitals (what a quaint idea in today’s hyper-cartelized system) managed by physicians and administrators who saw their role as serving the community rather than arranging for $20 million annual salaries and millions of dollars in stock options.
This is why the cartels love Medicare For All proposals: the federal government–protector and funder of the cartels–will give the cartels a blank check not just for the 120 million people currently drawing benefits from Medicare/Medicaid but for all 325 million Americans.
Medicare Beneficiaries: 57.7 million
Medicaid Beneficiaries: 72.3 million
estimated dual Beneficiaries (drawing benefits from both programs): 10 million
Total Beneficiaries: 120 million
Medicare/Medicaid budget, 2015: $1.2 trillion
Total U.S. healthcare costs: $3.2 trillion, 18% of GDP
Department of Defense budget, 2015: $575 billionsource
Are profit and healthcare incompatible? In the real world of state-cartel-capitalism, the answer is yes: a profit-maximizing system fails to deliver prevention while pushing costs higher, eventually bankrupting the Sugar Daddy government and the nation.
Prevention, like a bag of carrots, is intrinsically low-profit. Illness, especially chronic illness, is highly profitable because the profits flow continuously from treatments, medications, procedures, tests, visits, hospitalization, home care, a constant churn of billing, etc.
The only way to systemically lower costs is to make prevention and transparency the top priorities. Prevention, community ownership of healthcare services, transparency and unfettered competition kill profits, period. Yet these are the only way to lower costs to be in line with our competitors.
You can reconfigure the system any way you want, but you have to eliminate cartels, cartel ownership of governance, opaque pricing, government blank checks and incentives for profiteering from chronic illness. If you don’t eliminate all these, you’ve fixed nothing.