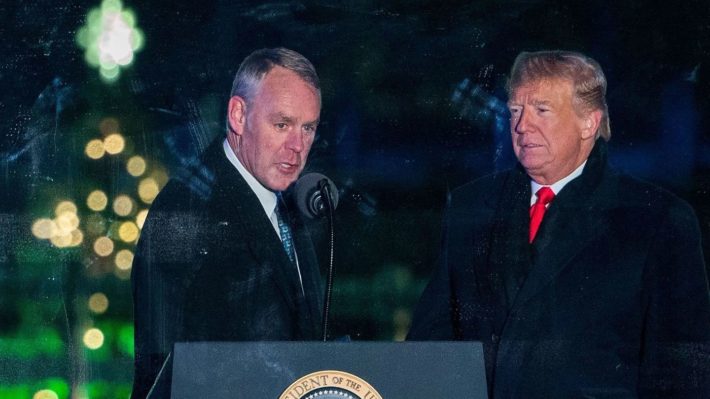 Among the up-is-down, night-is-day practices of the Trump administration, one of the most dangerous and disturbing is its habit of turning America’s leading science agencies into hives of anti-science policymaking.

A new report lays out how this has produced a “monumental disaster” for science at the Department of the Interior. The report by the Union of Concerned Scientists details how Interior Secretary Ryan Zinke and his minions have in the space of two years turned Interior from a steward of public lands and natural resources into a front for the mining and oil and gas industries.

“The intent in rolling back the consideration of science in decision-making is always to progress the development of fossil fuel interests,” Jacob Carter of the union’s center for science and democracy and lead author of the report told me.

This results in cascading negative effects on the agency’s mission. “Under Zinke’s watch, we see a lot of federal lands being opened for sale, which means a lot of endangered species will no longer be protected, and which has damaging consequences for climate,” Carter says.

Just last week, Zinke appeared before the National Petroleum Council, a government advisory panel plump with fossil fuel executives. There he crowed about how President Trump had made the U.S. “the No. 1 producer of oil and gas in the world.” That should show where his heart is.

Interior isn’t the only science agency that has been turned into a billboard for political and ideological propaganda. The Environmental Protection Agency has been similarly hollowed out, and the Department of Health and Human Services has all but abandoned its duty to advance Americans’ access to affordable healthcare.

Interior has taken a multifaceted approach to wiping science out of its policymaking. Zinke and his political appointees have terminated research projects or canceled them before they start. Among the affected studies was one to evaluate the health effects of coal strip mining in Appalachia. Interior shut down a study into how to improve inspections of offshore oil and gas development, which had been requested by Interior itself after the 2010 Deepwater Horizon oil spill in the Gulf of Mexico.

Interior has been “freezing out advice from science advisory committees; restricting DOI scientists from communicating about their work; removing, reassigning, or intimidating scientists; and creating a climate of fear and intimidation.”

Zinke reassigned dozens of top scientists to make-work jobs out of their fields in an overt effort to goad them into resigning. One was Joel Clement, a forest ecologist who had been a climate science advisor at Interior for seven years, until he was abruptly reassigned to an accounting office that collects royalty checks from fossil fuel companies.

As Clement wrote in a Washington Post op-ed last year, “I believe I was retaliated against for speaking out publicly about the dangers that climate change poses to Alaska Native communities.” He’s one of the co-authors of the Union of Concerned Scientists report.

All science grants over $50,000 made by any Interior program must now be vetted by “a single political appointee with no science degree,” the report observes. He’s Steve Howke, who was one of Zinke’s high school football teammates before launching a career in the credit union field.

Interior’s website used to be a clearing house for public information about climate change. Its climate page no longer exists at all.

When I asked for details, the spokeswoman referred me to a single investigation launched by Rep. Louis Gohmert (R-Tex.), a climate change denier, in 2016. Gohmert’s probe involved two incidents of alleged data inaccuracies at a single Interior lab in Lakewood, Col., tied to mass spectroscopy equipment. The first occurred in 2008 (that is, before the Obama administration) and the second resulted in the closing of the lab in 2016 (that is, before the Trump administration).

I asked Interior what specific actions Zinke had taken to address these incidents, but haven’t heard back. An internal departmental report found that the people most affected by the problems were 33 researchers who submitted samples to the lab and got back invalid results.

The Interior spokeswoman also dismissed the UCS report as having been “written by a former employee who voluntarily resigned.” She meant Clement.

She also said that the UCS report overlooked one aspect of Interior’s mission, which includes “fostering and managing federal energy, minerals and grazing.” Whether that requires pursuing fossil fuel development ahead of conservation and trying to rewrite endangered species policy is, one supposes, subject to debate.

We’ve reported in the past on some of the initiatives into ignorance cited by the UCS report. They include the activities of David Bernhardt, a former lobbyist for mining, oil and gas, and water interests who now holds the crucial position of deputy Interior secretary (and is a prime candidate to succeed Zinke if he’s ousted for ethical misdeeds).

Bernhardt’s fingerprints are on some of the more disturbing assaults on science at Interior, according to the UCS report. These include a December 2017 order revoking and rescinding a sheaf of Obama-era directives and reports on how the department should integrate climate science into its work. The order effectively deleted Interior’s climate change policy.

In September, Bernhardt issued an order purporting to serve the interest of “transparency” in science but actually would hamper the use of science in making policy decisions. We’ve reported before on the “transparency” scam, a tool of conservatives aimed at blocking environmental regulations.

This scam is especially insidious because it creeps around in sheep’s clothing. Generally, it’s promoted as an effort to base policy decisions on “the best available science,” as Bernhardt’s order stated; the idea is to frown on “data, information, or methods that are not publicly available” or that don’t meet “the standard for reproducability.”

This might seem innocuous, even laudable. But the promoters of rules requiring disclosure of raw data and analytical methodologies well know that much of this sort of documentation can’t be made public. Some is proprietary information belonging to scientists who developed it as part of their research. Some is personal information about human participants in studies underlying science-based rule-making.