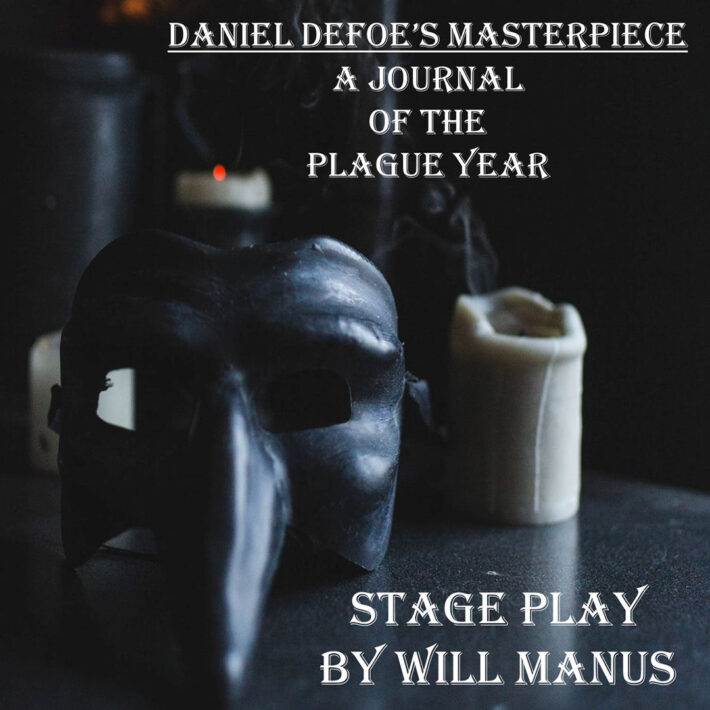 LOS ANGELES – (November 16, 2021) – Willard Manus’ adaptation of A JOURNAL OF THE PLAGUE YEAR, by Daniel (“Robinson Crusoe”) Defoe, will be performed by Write Act Rep from Nov. 13th – Dec. 19th, 2021 at the Brickhouse Theatre in North Hollywood. Produced by Write Act’s artistic director John Lant and by Anne Mesa, the play is directed by Daniel E. Keough.

Defoe’s non-fiction book is an account of the pandemic which attacked London in 1664, lasting a year and killing more than half of the city’s population. Although the story took place three hundred years ago, it is amazingly relevant to our present COVID-19 circumstances.

A JOURNAL OF THE PLAGUE YEAR is narrated by H.F., a businessman who has chosen to remain while multiples flee the plague-ridden city. H.F. re-enacts the terror of a helpless people caught in a tragedy they could not comprehend, with the weak preying on the dying, the strong administering to the sick, the wastrels partying in the bars and pavilions, the scientists battling the quacks and doubters.

Manus’ adaptation of Defoe’s masterpiece will be performed as a radio play, but with vivid production values (sound, lighting, and music). Jonathan Harrison is the stage manager/technical director. Original music composed/performed by Smokey Miles.

Willard Manus is a novelist and journalist as well as a playwright. Among his recent plays are SHOW ME A HERO and FRANK AND AVA (which is now an Amazon Prime movie). His best-known novels are THE PIGSKIN RABBI and MOTT THE HOOPLE, the band from which the British rock group took its name. Manus is a member of the Los Angeles Film Critics Association and the Actors Studio Playwrights/Directors Unit. He reviews theatre for Total Theatre.com and Lively Arts.com He lived for many years in Greece, serving as the Mediterranean Correspondent for the “Financial Post” (Canada).

Director Daniel E. Keough began studying theatre arts at the Goodman Theatre School of Drama. Trained also in voice and dance, he got his first professional experience performing in musical theatre. After moving to L.A. and working in all aspects of the entertainment industry, he became a member of Theatre West, where he directed two mainstage productions, one of which he also wrote, and designed many others.

The Brickhouse Theatre is located at 10950 Peach Grove St., N. Hollywood, CA 91601 (off Vineland, just north of Camarillo) Performances are Saturday night at 8pm, Sunday afternoon at 3pm. Tickets are $15.00 online from Brown Paper Tickets or $20 (cash at the door).

COVID POLICY IS THAT THE AUDIENCE IS VACCINATED AND MASKED AT ALL TIMES FOR THE PERFORMANCE. This is a vaccinated workspace.

Box office opens 15 minutes to curtain due to COVID Safety Protocols. Please arrive 15 minutes prior to show time for on-street parking. Thank you for your attendance during this brave new world. Stay Safe.

Under the producing artistic leadership of John Lant since 2003, WRITE ACT REPERTORY has produced over 60 Mainstage and 100 original one-act plays in Los Angeles and New York City. Write Act Repertory currently has had 15 plays Off-Broadway plays running at St. Luke’s Theatre and Actors Temple, in the heart of Broadway Theatre District. This company is dedicated to the development of original plays, lesser-known works by established writers, adaptations of classical-themed materials and musicals. Write Act Repertory also produces rarely seen works and unfinished musicals by composers who passed before their work was completed. www.writeactrep.org