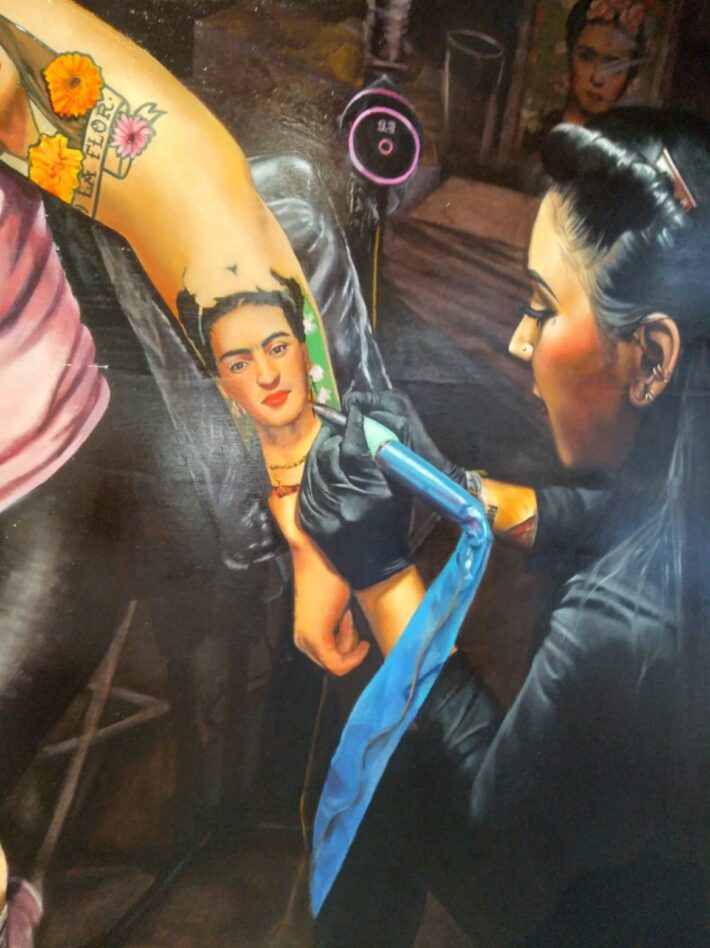 The story of an L.A. based tattoo artist and USC Roski, master of fine arts graduate, and how the grit of Los Angeles has geared her art.

In L.A., art is littered everywhere. Urban Los Angeles has been romanced with murals, graffiti, music, dance and everything in between for decades. It’s an easy argument that the streets of Los Angeles have gained such character from the struggles and hardships from the people that have resided in the city. Looking at the history of Chicano people in L.A., art has become a release for many residents. Sonora town and Chavez Ravine have been places of displacement for people of color, literally being dragged from their homes. The heart of the city has been driven by the diversity within it and the art from the people that have made it. Where does that come from? With all the terrorization that has fallen over the city — a city that could be argued, has let down the people that love it so much; why is Los Angeles still so beautiful to them? Let me introduce you to one of the pieces of this puzzle, Danie Cansino.

Growing up in Montebello, California, a city just outside of Downtown LA, Cansino is a true Chicana. She remembered low-riders constantly driving down Whittier Boulevard as well as hearing the tunes of oldies, having cholos as her neighbors and Modelo drinking at backyard and park family parties. This is a childhood that many local L.A. children can attest to.

“People think that stuff is hood or ghetto, it’s like, nah dude. We had all our family parties at the park…playing in the riverbed.” Cansino said.

Cansino didn’t always believe that becoming a professional artist was in the cards for her. This self-doubt and not having the encouragement from the people around her, put a deterrent and delayed what her true dream was. “I think it’s always like you’re gonna be a starving artist, like don’t be dumb, go for something else…so I went to Cal State Long Beach for creative writing,” Cansino said.

She eventually took up a job as a MAC make-up artist — a way that she could support herself as well as express the artist inside. Soon Cansino’s reality of working full-time as well as being a full-time student was not ideal, something that she said is a true systemic reality for many under-privileged brown students. She felt that the classist structure of having to juggle homework, school hours and a work week is the main defector in allowing success.

“There are opportunities based on class.” Said Cansino

Her 40-hour work week just to fund school wasn’t something that was ideal, as well as her having to resort to listening to audio books during her daily drives. Her decision to drop out came out as a survival tactic. Maybe this struggle proved lucky in Cansino’s case. The path that she now walked lead her to her true passions — painting and tattooing.”

“I love writing, but I know I have an innate ability to draw.”

Danie Cansino went on to receive her bachelor’s in fine arts from Laguna College of Arts and Design and is a recent graduate of USC Roski School of Art and Design. A prestigious program that may be a dream for any growing artist — earning her master’s in fine arts. She is also a resident tattoo artist at Mi Familia tattoo studio, located in Anaheim, California.

Tattooing came as second nature to her, but I hate to say this, we are living in a man’s world. Women in the work force have always been dominated in most fields. Pursuing a career in a predominately male workforce — this is even more true. When asked about any roadblocks that she might have had being a female Chicana tattoo artist, she elaborated not just touching base with her own history, but with that of many brown female artists emerging in the tattoo world.

“It goes without saying that there’s institutionalized racism and sexism in education, and the tattoo industry and everything so it’s definitely there.” Said Cansino

Toto G is a fellow tattoo co-worker at Mi Familia and comrade of Danie. When asked about how he sees the tattooing world as male dominated in relation to her breaking certain barriers, he says that he knows she’s aware of it, but while around her, he’s never seen her bothered by it.

“What she’s doing with her art, I think she’s trying to change the game…She’s been an inspiration…Her work speaks for itself but her character as a person —  I think that’s what brings people back too.” Said Toto G

Her master’s opening show titled, Sangre, showcased her immense talent as the painter she is as well as the pride in her L.A. Chicana heritage. Guests were greeted to a Home Depot paint bucket — seconded as an ice chest for Modelos and Jarrito’s — a table lined with a sarape and Mexican candies ;Hot Cheetos made their debut of course. Her Mi Familia family, as well as many others, were in attendance and amazed of the complete production.

Danie Cansino has joined a loud L.A. coalition along with many other Chicano artists. Artists like she, have allowed Los Angeles to be proved as one of the largest meccas of art in the world and it doesn’t seem like the wave will stop anytime soon.

With so many forms of art whether it be writing, a brushstroke on a canvas or a prick to the skin; art is multidimensional. She has beat many odds against her on her road to becoming a professional artist and thus far, seems to have followed the formidable format that her immigrate ancestors lead, “Si Se Puede”. The struggles that they lived to come here for a better life, helped her create her own.

“It’s the grit, the ruthlessness of L.A… the endurance that it instills in its people, that’s what makes it so beautiful…leaving this place is not an option. This is our home, and the struggle is always known…you have to grind, and if you’re not tough enough for that, then you’ll fail in this city; the city will eat you alive.” -Danie Cansino

Driven. Talented. Educated. Resilient. Cultured. Chicana…Danie Cansino is an Artist. She is L.A.