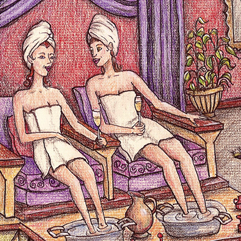 story and photos by Sara B. Allison

In Los Angeles we are lucky to have many ways of escaping—from catching a drink at a local bar after work to spending an hour getting a massage or other pampering treatments at a spa. Nitespa has fused the two to become an escape at any hour.

Tucked away just above a corner on Abbot Kinney Boulevard, nitespa fits in perfectly among the other charming stores and restaurants lining the boulevard in this trendy Venice neighborhood. The bungalow appeared inviting and homey as I approached it on a MAXFACTORy themed Friday evening in February. A sign reading “STOP: take a nap here” greeted me as I stepped into the cozy, loungey space fashioned in pink and brown. Last minute preparations were being made before the start of the 8 pm public event. But I immediately sensed the friendly, hip atmosphere and knew this was a spa that was, as owner Julia Lolita Martin later put it, “a little more rock n’ roll.”

Nitespa opened its doors in May 2005 and is open, by appointment only, from 12 pm to 12 am, seven days a week. The spa can also be rented for a private party of treatments for five to twelve—perfect for bachelorette parties or other soirees. (Packages can be customized.) Julia began her career by working at other spas and then got into event planning. Seeing the possibility of bringing the two together, she rented and remodeled the nitespa bungalow to build a spa that’s “more fun, less clinical” and “focused on beauty pampering”.

Retro lamps, shelves with beauty products and wisps of pink ribbons and hearts on the brown hardwood floors accentuate the Neapolitan theme Julia sees as reminiscent of a 1960’s ice cream parlor. The spa also doubles as a gallery featuring art by local artists.

To the right of the door sits a couch, and behind it DJ DJ Hottub Champagne was testing the record players as she flipped through her play options. To the left are chairs, ready for manicure, pedicure or make-up application. Another back room is usually used for massages, but tonight provided space for a bar, where complimentary Carpe Diem elixir drinks were being served. The other brightly lit, pink frosted room is used by the spa’s Parisian aesthetician.

After Julia filled me in on the basics of the spa, she suggested I get my eyebrows shaped. Since I’ve only had my brows done once, I figured I should get into the spirit of the evening and followed spa employee, Heather, into the back room. We chatted and as she began, she made sure the wax wasn’t too hot for me.  Moments later, Heather handed me a mirror and pointed out that my eyes had been opened up with just a simple shaping. Simple beauty to kick off a Friday night really does feel, and look, good!

I went to the bar, to sample a Carpe Diem Kombucha (available at Whole Foods) with champagne. (Elixirs are offered at every appointment—a nice touch.) I ran into the second DJ, Julian, who described the nitespa atmosphere as a “nice synthesis” of spa and lounge.  His girlfriend came for the evening as well and I later noticed her getting a pedicure.

Friends and customers filed in and out of the main room as the make-up artists and other spa employees worked their magic and downtempo tunes intertwined with more dancey, fun songs like “Hot Stuff.” It was a great pre-party atmosphere—the perfect kick off to my weekend.

As I continued my quest to find unique spa treatments in the Los Angeles area, a friend informed me about a body treatment called The

Grotto at Glen Ivy Hot Springs Spa. On a sunny Sunday afternoon, my friend Diane and I set out to experience the treatment for ourselves. Although the hour and fifteen minute drive seemed like a long commute (the original Glen Ivy Spa is located 58 miles from Los Angeles, in the town of Corona), I knew once I stepped onto the grounds that we were in for a treat. Glen Ivy is located on 11 lush landscaped acres with 16 pools and spas. They have facilities that house 53 treatment rooms and 8 manicure/pedicure stations.

After getting the lay of the land, we headed into the locker room to put on our bathing suits before our descent into The Grotto. Upon entering the Grotto building, we checked in before descending further in a slow elevator. We exited into a rock room where a spa employee had us place our flip-flops and other possessions in a bin. A moment later, we were beckoned through a door where attendants painted us with a light green body moisturizer, which contains sea kelp, aloe vera and other beneficial elements.

Then we passed through another door, and finally entered The Grotto. It felt like we were in a cave, and we immediately felt the humidity of the Hydrating Chamber. This is a great treatment for groups since the treatment stays on for 15 minutes, and there’s plenty of room to lounge and socialize. Diane and I easily shifted into relax mode and chatted as we waited for the treatment to moisturize our skin. We exited into the shower room, where multi-head showers aided in rinsing the masque from our bodies. Green apples, tea and water greeted us in the cool mist chamber. Somehow the crispness of the apple and the coolness of the room made my moisturized body and mind feel even better! I could get used to spa days like this!

Since it was such a beautiful day, we decided to stay and take advantage of the rest of the facility.  We started out at “Club Mud”, a unique red clay mud bath that has a purifying effect. (The clay is mined in a nearby canyon and is indigenous to Southern California.) A pedestal piled with mud sits in the middle of a mineral bath. After a quick shower, to get wet, we stepped into the bath and applied the mud to our bodies. Then we baked in the sun, until the mud dried, flaking what we could off before washing off again under a shower. We both commented on how great the lavender scented Body Cleansing Gel in the showers was. (Make sure to bring an old or dark bathing suit because the clay stains some fabrics.) My skin felt soft and cleansed—something you might not expect after slathering mud on yourself!

Diane is a big fan of hot tubs, so we decided to try a few out.  We began by testing the Mineral Baths (these waters cleanse pores and relax muscles), which are the real reason the spa exists. The mineral springs are what originally drew Native Americans, and then later tourists, to the area. We also took a quick dip in the Salt Water Spa. Since there are so many options, it was easy to find space in different tubs.

On the way home, the moon shone down on us as it hung over the mountains. I had experienced night and day spas in one weekend and had come full circle back to evening.  Only now, nighttime meant bedtime as my cleansed body made even my mind relax. If only I could escape to next weekend!

Admission to Glen Ivy is $35 per person Monday through Thursday and $48 per person on weekends and holidays. Admission to The Grotto is $25 and is on a first come, first serve basis. Massages are $40-$130 and body treatments start at $50. Visit: www.glenivy.com for a full spa menu.