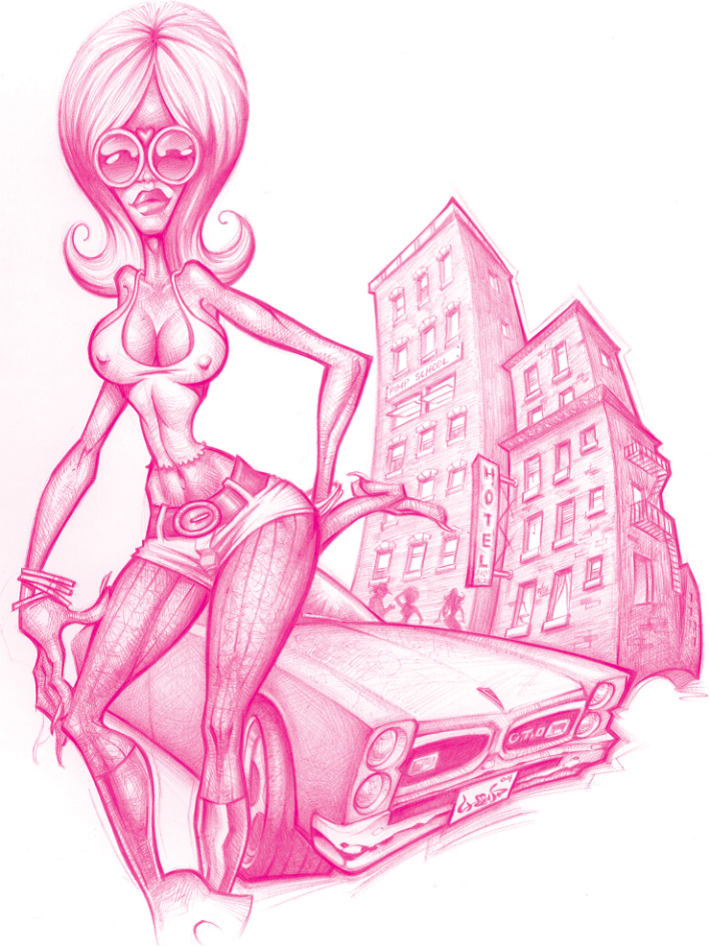 Remember that 94 year old man who mowed down all those people at a Farmer’ Market in Santa Monica a couple of years ago?

Yeah, neither does the DMV.

Which is why, even though it should be, it’s not as easy as you might think to get an elderly driver off the road. The Department of Motor Vehicles doesn’t have an “old people hotline,” even though they probably should. When I call up, I have to keep saying, over and over again, “Hello, my grandmother is too old to be driving, and I think you should revoke her license.”

“Hello, my grandmother is 95 and she still has her license, and I think you should retest her.”

“Hello…can you transfer me to the right department? My grandmother is too old to drive.”

The longer I stay on the line, the more I start to feel like I’m in some kind of qualifying round for “World’s Worst Granddaughter” reality show.

I have to keep reminding myself that every time I tell someone she still has her license, they actually ask me what town she lives in, so they can stay away from there.

2003, she’s 93 and still o the road. The only reason she’s still driving is because she’s my mom’s roommate, and we can keep an eye on her. Then suddenly, tragically, my mom passes away at 59, leaving my grandma alone in a big house with her own car. The social worker at the hospital takes me aside and tells me I need to “deal with the situation.” Two years later, all I can think of is this-maybe call the DMV, casually mention she’s 95 and still on the road, and let them take the action. Then I’m not the bad guy, and she’s out of harm’s way. A great plan-in theory.

When I finally get to the “Defcon 5” department of the DMV, I’d told that it’s not as easy as you might think to get an elderly driver’s license revoked. “Just because someone’s old, doesn’t mean we can just take her license away,” says the voice on the other end of the line.

“It doesn’t?” I say, genuinely surprised. These are the people who keep sending her the license renewal-I thought they just did this until someone pointed it out. Apparently not. When I suggest that maybe it would be a good idea to test the old folks every year after they turn 90 and no longer have all their motor skills, she also balks. “That would take a lot of paperwork, you know.”

Should I be scared that the DMV doesn’t have a sophisticated enough computer system to ALERT them when a person it over the age of 90?

We go back and forth in this manner until I ask point blank what it’s going to take to get them to retest my Nana. “Well,” says the clerk after some thought (and what sounds like a Cheeto). “You could send a letter to the Department of Safety, saying that you think she’s an unsafe driver and that you think we should re-test her. For this, we’ll need her name, address, and driver’s license number. You can do this all anonymously.”

Anonymous, apparently, is code for “I don’t have the balls.

But, how am I supposed to get her driver’s license number anonymously? I feel like I’m trapped inside a Dostoevsky novel. “Don’t you have a database for this?” I ask. She chortles, eats another Cheeto. “Oh, we can’t give that out. That’s private information.”

Now I’m not just the granddaughter that called the DMV. I’m about to become the granddaughter that snuck into her grandma’s purse to look at her driver’s license number in order to rat her out to the DMV. Good times. I drive to her house like I’m some cat burglar. She’s making me tuna salad on wheat toast at exactly 1:30pm (the time when she eats her supper everyday). I see her purse on her bed and walk toward it. Slowly, I take out the wallet. If she sees me, what am I going to say? On the other hand, if I don’t do this, she’s going to keep driving until they take her license away, which at this rate is going to be when she’s 100 years old. I think back to all the people who’ve been telling me I have to “deal with it,”and how they would feel if they had to go into their grandma’s handbag to get the driver’s license number in order to rat her out.

I quickly memorize the number, noting the irony inherent in the fact that it actually does note on the license that she was born in 1901. This makes me start thinking about the fact that when she was born, nobody even had a car. I cannot sink any lower. I am about to ruin my Nana’s life.

The letter is short and sweet. It contains the number. It says what the DMV told me to say. I slowly type “Anonymous” at the end. Anonymous,  apparently, is code for “I don’t have the balls.” That’s fine. I don’t need the balls. I seal it, put it in it’s envelope. I put it on the piano, which is where outgoing mail goes in my house. Somehow, it stays therefor a week,then two. Apparently the mental hurdle wasn’t overcome with the phone call to the DMV. The actual life ruining action is something that needs follow through.

I cannot send the letter. After the whole process, it’s too much to set the wheels in motion for a old woman who lost her husband and her daughter, all in the span of five years. The letter sits on the piano.

It’s no longer just a letter. Now it’s a symbol of too much responsibility, of a decision, once made, that cannot be unmade. An action, both outcomes of which just suck.

Finally, mercifully, my grandma agrees to move to a small, senior-type apartment that is closer to my uncle, meaning there is no longer any reason for her to drive. She keeps the license,but agrees to limit her car use to “rarely.” My family sees this as a great improvement. I’m not 100% satisfied, since I suspect she will use “rarely” as an excuse to drive herself to the casino as long as she still has a license, but at least I can take the letter off the piano and throw it away.

I still say they should implement an “Old Person’s Hotline.” I mean, really.