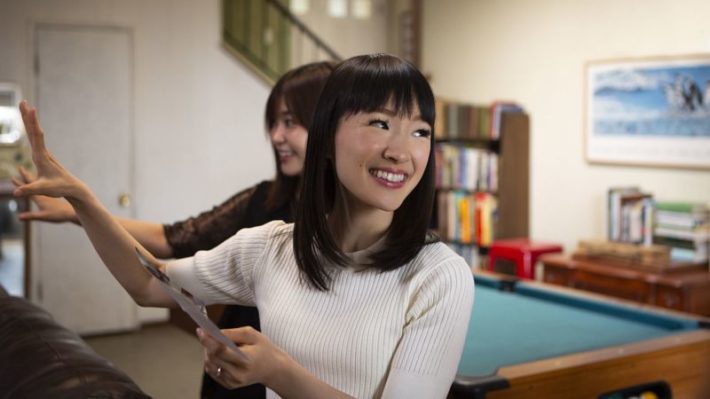 First, let’s take a moment to thank the device you’re using to read this story, or the table holding up your newspaper.

Your computer and phone and furniture work very hard for you. They’re inanimate objects, yes. But think of how you’d feel if you lost them.

We all have attachments to our things. And if you live in America, you probably have too many of those things. Enter Marie Kondo.

Her book, “The Life-Changing Magic of Tidying Up,” first graced us in 2014. As of last week, she’s also a streaming sensation: Season 1 of “Tidying Up” went live on Netflix on Jan. 1, just in time to catch a nation of well-meaning but hungover resolution-makers.

Marie Kondo drops in on harried L.A.-area families not unlike Mary Poppins, armed in a uniform of spotless snow-white sweaters and floaty skirts and cheerfully bearing an armload of nested boxes. T-shirts are folded, books are tapped, papers and cords are wrangled, the house is thanked. When she departs, she leaves in her wake a beatifically serene family, secure in the knowledge that the carefully folded drawer contents and meticulously organized home will definitely, for sure, always look that way.

The tenets of “Marie Kondo-ing” your home are simple: Hold every item you own. If it sparks joy, keep it. If not, get rid of it.

If social media is any indication, the message has resonated. Since the show launched, America has collectively emptied its closets onto the bed. More than 94,000 Instagram posts are tagged #mariekondo, and she’s been mentioned on Twitter more than 80,000 times since Jan. 1. Two-thirds of the people talking about Marie Kondo on Twitter are female, according to a data analysis from the social media analytics firm Brandwatch, and the majority are having a positive reaction to the show.

It’s not surprising that the show is appealing to people, said Katie Kilroy-Marac, an assistant professor of anthropology at University of Toronto.

“This is a golden age of consumers” in America, said Kilroy-Marac, who studies material culture and ethical consumerism and has done research on hoarding. Collectively, she says, we’ve reached a breaking point: “We’re literally suffocating in our things.”

Netflix declined to share viewership data for this article, but it seems safe to say Kondo-mania has taken off. A sign it’s certifiably trending: There’s already backlash.

“Do not listen to Marie Kondo or Konmari in relation to books,” tweeted author Anakana Schofield. “The woman is very misguided about books. Every human needs a v extensive library not clean, boring shelves.”

In America, what we buy is a reflection of who we are. I choose to purchase this book, this shirt, this kitchen gadget, because it is representative of who I am or hope to be. Even the word we use indicates that relationship: belongings. The clutter in your house was chosen by you, and it belongs to you. Your junk is you.

“Products give you a lot of value in different ways,” said Liad Weiss, an assistant professor of marketing and consumer psychology at University of Wisconsin-Madison. “There is the practical element but also the emotional attachment.”

Books, in particular, speak strongly to our sense of self. We might own a book because we read it in the past and have fond memories of enjoying it or of the time in our life that we read it. Books we bought but haven’t read yet represent our past self who chose to buy that book, the present self who still owns it, and the future self who will read it. If you bought “Infinite Jest” a decade ago but still haven’t worked through it, getting rid of it signals that you’re giving up. You are eliminating that future self who is absolutely going to read and understand “Infinite Jest.”

Books are also physical objects that have aesthetic value in our homes and that signal to guests what kind of person you are. Maybe you haven’t read “Infinite Jest,” but having it on display for all to see signifies that you’re the kind of person who would.

Emotional attachments to our things make more sense to Americans than to Japanese people like Marie Kondo, said Hazel Rose Markus, a professor of psychology and a cultural scientist at Stanford. Japanese culture has much less of a focus on individuality and choice and much more on interdependence and doing the objectively “right” thing. For a Japanese person, buying something is a more objective experience, she explained. You bought it because it was the correct thing to buy, not because it spoke to your individual sensibilities.

That makes it a lot easier for Japanese people to get rid of their things, she said. If you didn’t choose it – if it does not reflect who you are as a person – it’s a lot easier to thank it and send it on its way.

Also, in Japan, living spaces are much smaller, which means you get rid of things more often. In the first episode of “Tidying Up,” the family shows Kondo around the house, pausing near the galley kitchen in their suburban one-story.

“American kitchens are so large!” Kondo says through her translator.

“They are? This is large?” the wife responds.

A not-insignificant part of the appeal of the show, and of the idea of Kondo-ing our own spaces, is the idea that being more organized would make us less stressed. Darby Saxbe, an assistant professor of psychology at USC, worked on the UCLA Center for the Everyday Lives of Families study as a graduate student. In it, researchers did observational studies of middle-class families around L.A., not unlike the ones featured in “Tidying Up.”

“One of the things that researchers noted to each other was what a clutter crisis our families seem to have,” Saxbe said. For instance, almost none of the families surveyed used their garage to park their cars. They were used as extra storage space.

As part of the study, researchers videotaped families walking through their home and describing it. Then they measured the subjects’ cortisol levels, which is a hormone released when you experience stress. Women who used more words associated with clutter to describe their homes had “less optimal profiles of cortisol,” Saxbe said.

In other words: Mess leads to stress.

And it’s not surprising that that effect was noted in women. The house has traditionally been the woman’s domain, and it was the job of a wife and mother to keep it tidy. Now, more women work outside the home than in previous generations, but in many of those homes, the majority of housework and child care still falls to her — the so-called “second shift” first observed by researchers in the late 1980s.

“We traditionally think of the home as kind of a place of respite, a haven from the stress of the outside world,” Saxbe said. “But for many women particularly, the home ends up being its own source of chronic stress.”

The reason: “We’re overwhelmed with projects and responsibilities, and there’s an inequitable division of labor. You work all day and then you come home to a house that’s a mess, and it’s one more drag on your body’s ability to recover from the stress of the workday.”

So the idea of having someone magically appear in your house and show your husband and kids how to fold and put away their underwear — well, it’s not hard to imagine the appeal.

People are also drawn to the idea of “correcting” ourselves, said Dana Logan, a visiting professor of religious studies at Connecticut College. Think of all the most common New Year’s resolutions we make: Lose weight. Hit the gym more. Make a budget. Get out of debt. Things that require self-discipline, self-denial and a transformation into our more perfect selves. We detox, we cleanse, we become a thin person with a perfect credit score who reads “Infinite Jest” for fun.

A lot of these behaviors have roots in Christian asceticism, Logan said, particularly the way women were expected to behave in early Christianity. Women practiced self-abnegation for the greater good. A rising number of Americans describe themselves as either not religious or “spiritual but not practicing,” but we’re still drawn to secular versions of the things our religious ancestors did: Fasting. Discipline. Denial.

A lot of our current consumerist culture is at odds with America’s Protestant and evangelical roots, but those things inform our culture in another way: Self-transformation. We make resolutions and go on diets and Kondo our closets to become a better, purer self. To be born again. Losing weight and paring down our belongings don’t just signal that we’re thin and clean; they indicate virtue and moral correctness.

So we end up with a kind of cultural whiplash. On one hand, we’re encouraged to buy things. On the other, we love to get rid of them. Think of the show “Hoarders,” of the tiny house movement, of #minimalism and no-spend challenges. We are caught in a cycle of consuming and rejecting. We celebrate both parts of that on social media, where we post photos of ourselves showing off new outfits and then videos of our drawers of freshly decluttered and folded T-shirts.

Decluttering your closet, like any major transformation, can feel like a religious experience. (Ask anyone who’s just dropped seven boxes off at Goodwill how they feel.) Even Marie Kondo’s physical presence feels otherworldy: She’s tiny and she wears the same outfit all the time and she doesn’t speak English – like some kind of “spiritual alternative,” Logan said. On Twitter, someone referred to her as a “good witch” of “household spells and charms.”

Her approach to the house and belongings is also generally unfamiliar to most Americans, starting with thanking the house and including tapping your books to “wake them up” and thanking your things before getting rid of them.

The Guardian writer who took issue with Kondo’s approach to books called those behaviors “woo woo, non-sense territory.” But that kind of anthropomorphism is common in Japan, said Markus, the Stanford cultural scientist. Like America, Japan’s culture has deep roots in religion – Buddhism, Confucianism and Shintoism. They all have aspects of nondualism, which posits that everything has a spirit. In some ways, Markus said, that makes it easier to give away things like books: “Once you have the idea that a book has a spirit and could feel bad, it’s quite appealing” to give it away and let it be read by someone else.

The families are visibly moved in most episodes when Marie Kondo kneels down and thanks the house. Most shows about decluttering and organizing, like “Hoarders,” approach the house and its contents as the enemy: It is the house’s fault for not fitting all the stuff; it is the stuff’s fault for not fitting in the house. Instead, said Logan, the religious studies professor, Kondo urges people to create intentional relationships with their belongings and with their home, which can be empowering.

For the families, who document their decluttering “journeys” with videos, the experience can be stressful. So can just watching the show. Saxbe, the USC professor who studied stress and families, said watching other people clean their houses on TV is a bit like watching shows where people bake elaborate desserts: It seems appealing, but perhaps not something we ourselves are willing — or able — to do. And like watching someone else pull off a perfect souffle, watching strangers on TV — or worse, friends posting photos on Facebook — achieve tidy perfection can be, frankly, annoying.

Even if you’re not prepared to embark on a full Kondo-ing, there are lessons to take away. Create an intentional relationship with the things you own. Treat your things with kindness. Be grateful to your belongings for what they do for you.

And don’t forget to thank your phone.