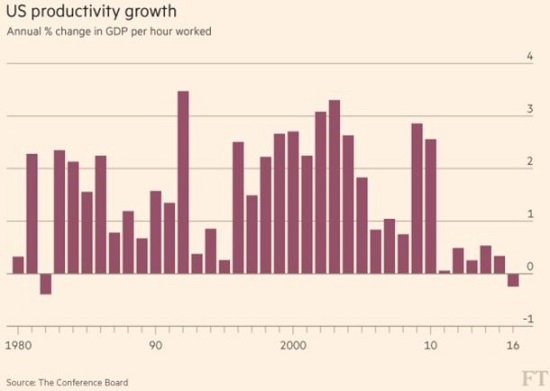 Employers have no choice: it’s innovate/automate or die.
Automation–networked robotics, software and processes–has already had a major impact on jobs. As this chart from my colleague Gordon T. Long illustrates, the rise of Internet technologies is reflected in the steady, long-term decline of the labor force participation rate– the percentage of the populace that is actively in the labor market.

The oft-repeated fantasy is that every new wave of technological innovation creates more jobs than it destroys. Not this time: the total number of full-time jobs has stagnated for years, and most of the new jobs that have been created are in low-wage, moderate-skill positions that cannot move the productivity needle much: jobs such as those in the retail and restaurant sectors.
Real wealth isn’t created by printing currency or jacking up stock valuations–it’s created by increasing productivity. As this chart reveals, productivity has stagnated for years. This is a complex dynamic, but we can surmise that the low-hanging fruit of automation has already been harvested, and the addition of jobs that are inherently limited in the productivity gains that can be achieved are core components in stagnating/declining productivity.

The problem is non-tradable labor is typically impervious to productivity gains: even the most experienced bartenders can only draw so many beers and mix so many drinks in an hour. A retail salesperson can only help so many customers in an hours, a gardener can only mow so much lawn in an hour, and so on.I have often discussed productivity and economist Michael Spence’s framework of tradable and non-tradable labor. You want a beer-bottling machine? That’s a tradable good; it can be manufactured anywhere in the world. You want a beer at the local tavern? That is non-tradable–it is a service that can only be provided locally.
As Gordon and I discuss in our new video program, Robotics & Chronic Unemployment, automation is now entering these non-tradable sectors with a vengeance. Sectors dominated by non-tradable labor include taxis, local trucking, long-haul trucking, delivery services, courier services, retail, restaurants, fast food, and so on.
Every one of these sectors is perched on the precipice of dramatic disruption by automation. Self-driving vehicles, drone deliveries, self-serve kiosks, robotic store clerks that have the entire store inventory available to answer customer questions–the list of automation advances in once-safe sectors is almost endless.
The driver is the need for productivity increases. Labor costs keep rising, especially for labor-overhead expenses such as healthcare insurance and pensions. The cost of living keeps rising, pushing wages higher.
If productivity can’t be increased, the only alternative is to raise prices. But consumers, even at the high end, are reaching their limits. When meals that cost $20 now cost $30, consumers start opting for cheaper alternatives.
Corporations and small businesses alike can only trim production costs and keep prices fixed for so long before profits vanish.
Enter automation. The new technologies are now giving enterprises the tools to increase productivity in these previously low-productivity non-tradable sectors.
While we can collectively fret over this need to increase productivity and the resulting decline in paid labor, the employers have no choice: it’s innovate/automate or die.
Even local, state and federal government agencies and contractors, heretofore impervious to soaring labor and overhead costs, are about to feel the urgent need to automate as a survival technique as budgets turn red in rising deficits and taxpayers revolt against ever-higher taxes.
There are no safe sectors any more because unrestrained cost increases are killing the economy. Healthcare is a runaway train, and all the buffers that enables prices to go to the moon are gone: we can’t even afford the limited Medicare we have now, much less Medicare for All.
It’s not just low-skill jobs that are being destroyed. Look at the automation of financial services and trading. In the near future, if you want human service, you’ll have to pay extra–if it’s available at all.
There is a self-reinforcing dynamic to job losses and stagnating wages. As households receive less income, they must tighten their belts, further pressuring government and private enterprise alike to do more with less costly labor.
Given a choice between a lower-cost automated service and a higher-cost human-labor service, the bottom 95% will have to choose the automated service.