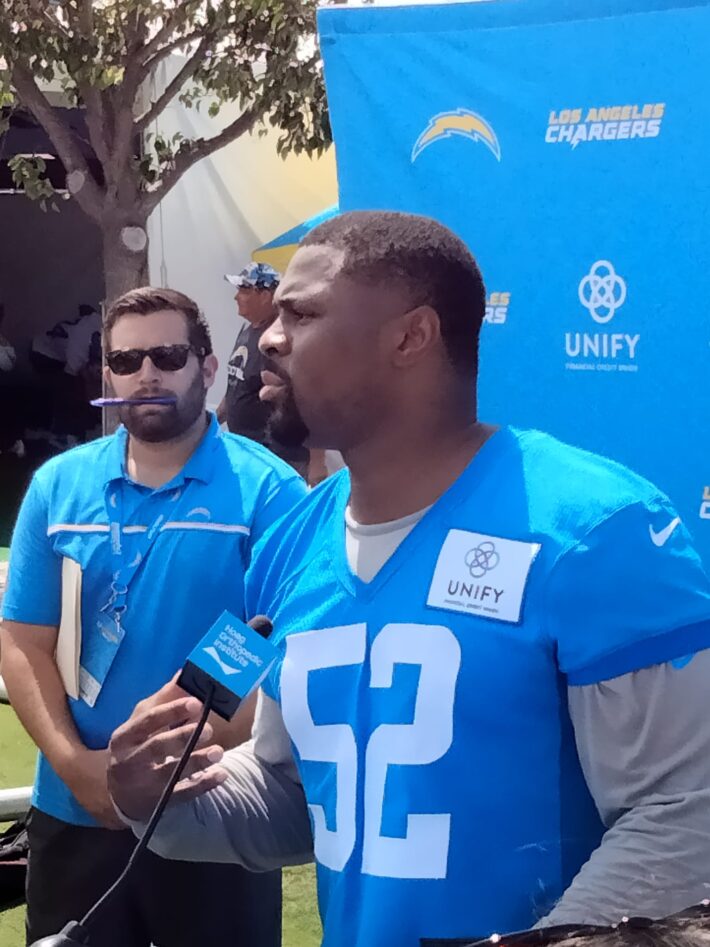 A bright, beautiful and slightly overcast day in Costa Mesa.

Bleachers are packed and there is a unique energy abound. This is my sixth training camp and I can tell you, this energy is special. The players feel it, the league feels it and the fans feel it.

Day one of camp drills are faster; smoother than normal. Transitions happening like this group has been together for months instead of weeks. one thing that is greatly affecting this energy this year is something the chargers have made poor decisions on in the past that have come to bite us during injuries.

Depth, everywhere you look in the organization you can see it. The running back, cornerback, edge, linebacker, Oline, wr, every one of those groups has great depth.

I had the opportunity to ask Coach Staley. With the bolstering of the defense this off-season, are we still going to be seeing that “4th and Staley” like we did last year? “I think we have full confidence in our team, and how we do things. and I think each of those situations has a life of its own and I’ve said that from the beginning. I know that kind of exploded last year, and I do think it’s a positive thing for our team because we want to be aggressive, we want to be a team that’s fearless, that’s not scared to meet a moment. but every decision has a life of its own and were gonna take it case by case. We have a brand-new team so to say were going to be exactly like last year — that’s not going to be the case.”

Of course this year isnt going to be the same. But that same grit and determiniation along with the willingness to face a situation head-on, will still be happening without a doubt. I have all the faith in the world in Coach Staley and his calling of 4th-downs; which the Chargers set the NFL record with 22 completed 4th-down conversions and an almost 50% success rate.

One of the biggest additions this off-season was Khalil Mack. Acquired in a trade from the Chicago Bears for a second and a sixth round pick. Now, some may say we didnt trade for Mack; we stole him. Expectations are high and people are eagerly awaiting the pass rushing duo of Bosa and Mack.

“With the week one matchup being your former team–the Raiders,–s the first game going to be return of the Mack?” I asked Mack

“Lol, I wasn’t expecting you to say that last part. I mean it’s just a game right? That’s what people say it’s just a game. I get to play against some guys I know. We gonna talk a little trash but it’s gonna be fun. Football is fun.” Said Mack

Let me tell you. when you make a player like Mack laugh, you feel like you left a good impression on media day.

Mack was also asked,” how hungry are you after situations with the Raiders and then the Bears?” and this man had the greatest response to the question “Hungry? you want to know how hungry I am? I’ll show you,” and then walked off the podium, and as a fan–let me tell you–I got goosebumps.

With additions this off-season of Day, Jackson, Callahan and Johnson, this defense is about to flip the script for the Chargers. Last year the Chargers were one of the last in the league in opponents points per game. I have a feeling this year is going to be a completely different story. With Herbert and the Chargers having so many one posesion games, the odds will only get better for them.

One of the best things I saw all day was seeing Chx Parm getting first team reps and seeing him back on the field. can’t wait to see this connection again throughout the year.

I asked Justin Herbert, “With having already set franchise records in single season yards and single season touchdowns, what are your personal goals for this year?”

“I dont realy pay attention to that. I just want to be the best teammate and the best team player i can be.” Said Justin

Could you ask for a better guy to lead you into battle? The unselfishness, the humility. Justin Herbert is who I want to be when I grow up.

Now let’s finish up with talking about a member of the team that has been ragged on since the Chargers move to Los Angeles. The fans. This training camp energy says it all. In Costa Mesa,California training camp opens at 9 a.m.. Fans were lined up in droves since 2:30 a.m.. Name another fanbase where that’s happening at training camp and in swarms. Stands are packed barely any standing room only and a field full of people on top of that. It’s a far cry from the StubHub crowds. This year this whole city is behind them, and that energy is felt. From vets coming to OTA’s to get an early start, to building comraderies with the new players and the easy transitions for the off-season acquisitions. This year is our year Charger’s fans!