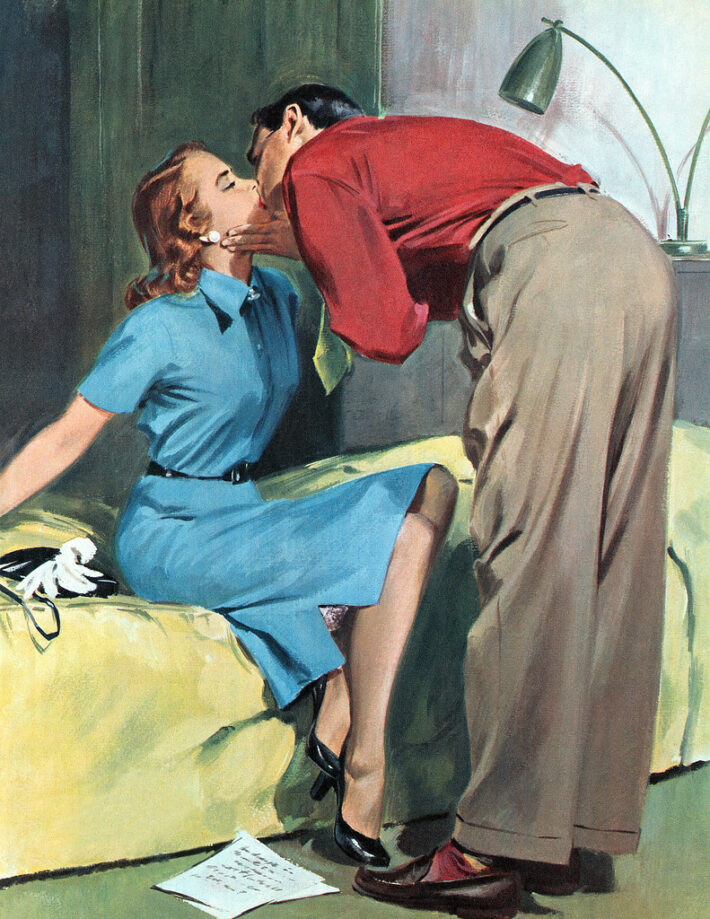 No one will ever check ALL the “bells and whistles” boxes on your love list. Making rooted happiness doesn’t come from selecting interior and exterior ideals in a partner like you’re building an automobile for purchase online. And you may think the car that costs a doctor’s yearly salary is your coastline cruising dream, but, it too eventually loses its new car scent. And even best case in that scenario, there is only so much stock/factory can offer you to begin with. Then the next year its subpar anyways so “woo-hoo” for your ego for a few months while still being basic. (I automatically hear the song “Flavor of the week” in my head.)

No perfect person exists or will ever completely measure up to some fantasy ideal, a lot like a vehicle. We can however, build parts of ourselves to help make the machine of companionship last a lot longer than a basic factory build or newest model momentarily marketed.

There’s no pit stop to patch up relationship problems in 30 seconds, and no lifetime warranty on even a marriage.

We live in a world full of selfishness, temptation and sadly half of the curves down the lane-lead to crashes. I guess what really matters is having someone who is willing to hold your hand down any road, even windy and dark or jagged and narrow. The other half of you who is willing to turn around and choose another path, no matter what, side by side.

Sometimes a trail unexpectedly ends and it takes two people to collect stones in the dark and pave another way, arm in arm. It means turning down an elevator offer for one. Or trading in a single, first class ticket on a plane, for two economy seats in the back, or a bus ride if that.

It’s about carrying one another through the storm, because being under a rainbow with someone you don’t really love, means nothing in the end and certainly no pot of gold is there kissing you when you grow old.

The grass is greener where you water it

In the world of sports car leases and always wanting the latest model or iPhone upgrades quicker than you can blink, it’s no wonder love is treated like something you can just “trade in.”

I think most people protect their hearts by counting on the only person they’ve ever been taught to count on to finish the race; themselves. It’s the “I want the best seat in the house,” mentality, wanting the newest shiny toy at all costs while pushing the old lady out of the way to get first in line.

Trust, a good marriage, alike a custom show car isn’t just magically appearing, it is cultivated. comparison is a thief of joy, and rubber necking gets no racehorse to the finish line.

I wish we weren’t afraid as a society to have our daughters believe in a prince who would ride up on a mustang, or search the land to match a slipper to a foot. Or the tale of a sleeping princess who was brought back to life by her true love’s kiss.

What is so wrong believing that men could be chivalrous and protective? Or sacrificial and masculine? Nowadays its all check splitting, divorces and a unisex society. We swipe on our phones for a hookup that could lead to liking…. maybe.

Live-in relationships are just “trials” and when times get tough instead of fixing what used to run so perfectly, everyone tells you to just take it to the junk yard instead.

There lie half broken vehicles of love, like a graveyard for the halfhearted and the half-hopeless. Some sold for parts or some don’t want to go through the burnouts again, so they opt to just rust away in the sea of incomplete vessels.

There’s the man who shines and tunes up his classic car he spent a lifetime restoring and will keep forever. There’s the man that spends every Sunday bragging about it at car shows like his life’s biggest achievement of irreplaceable value.

On the opposite end of the spectrum, there is the luxury sports car lease holder. He is always eyeing what else is on the road because it doesn’t really belong to him and he has only invested short term for the wrong reasons. Its a meager monthly mindset for a trendy depreciating asset. On to the next….”Til next do us part.”

Passion behind the wheel

“How did we manage to stay together so long? It’s simple really. We are from a time where if something is broken, we fix it; not throw it away.”

-A classic kind of couple

If that analogy of love vs. classic cars hits home, imagine if YOU thought of LOVE that way, not just car ownership. The leaseholders say, “well at least I’m not an Uber,” which is true. Those are the ones who are transient in lust, or would rather drink than drive or there just for the night like “whats my driver’s name?”

I don’t know about you but I want something durable through a lifetime not a night or rental, a love that lasts. Someone always on my side, like “nationwide.” (yes that was a play on the commercial’s slogan.) I’m in it to win it like the ice truckers, for the long haul, all puns intended.

Keys to my heart

I know personally I want to be loved like that classic car in his garage, that he may have spent more time and money into than most thought it was worth. The one he wanted to restore as close to the original, as seamlessly as possible. The man who shines his rims on his day off and joy rides around town, after church. The kind of car other classic men drive by and admire, part of the elite club. A sort of vehicle he would teach our child how to maintain and pass on that kind of love to. A cruiser that reminds you of an old movie, or how love should be. Vroom vroom.