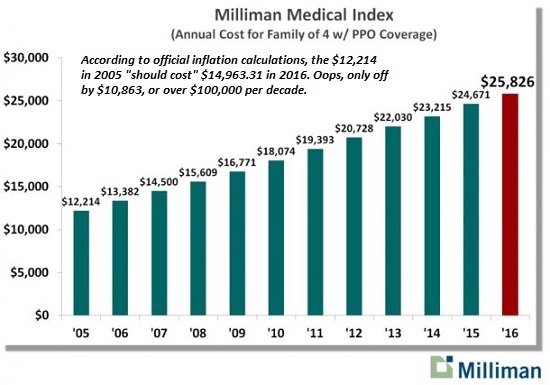 If you want to understand why we’re fragmenting as a society, start by looking at the asymmetric burdens imposed by inflation.
The cost of a regular burrito from our local taco truck has gone up from $2.50 in 2001 to $5 in 2010 to $6.50 in 2016.In our household, we measure real-world inflation with the Burrito Index: How much has the cost of a regular burrito at our favorite taco truck gone up?
That’s a $160% increase since 2001: 15 years in which the official inflation rate reports that what $1 bought in 2001 can supposedly be bought with $1.35 today.
My Burrito Index is a rough-and-ready index of real-world inflation. To insure its measure isn’t an outlying aberration, we also need to track the real-world costs of big-ticket items such as college tuition and healthcare insurance. When we do, we observe results of similar magnitude.
Our money is losing its purchasing power much faster than the government would like us to believe.
According to official statistics, inflation has reduced the purchasing power of the dollar by a mere 6% since 2011: barely above 1% a year. We’ve supposedly seen our purchasing power decline by 27% in the 12 years since 2004—an average rate of 2.25% per year.
But our real-world experience tells us the official inflation rate doesn’t reflect the actual cost increases of everything from burritos to healthcare.
The cost of a regular taco was $1.25 in 2010. By official standards, it should cost a dime more. Oops—it’s now $2 each, a 60% increase, six times the official rate.
The cost of a Vietnamese-style sandwich (banh mi) at our favorite Chinatown deli has jumped from $1.50 in 2001 to $2 in 2004 to $3.50 in 2016. That $1.50 increase since 2004 is a 75% jump, roughly triple the official 27% reduction in purchasing power.
So let’s play Devil’s Advocate and suggest that these extraordinary increases are limited to “food purchased away from home,” to use the official jargon for meals purchased at fast-food joints, delis, cafes, microbreweries and restaurants.
Well, how about public university tuition? That’s not something you buy every week like a burrito. Getting out our calculator, we find that the cost for four years of tuition and fees at a public university will set you back about 8,600 burritos. Throw in books (assume the student lives at home, so no on-campus dorm room or food expenses) and other college expenses and you’re up to 10,000 burritos, or $65,000 for the four years at a public university.
University of California at Davis:
2004 in-state tuition $5,684
2015 in state tuition $13,951
That’s an increase of 145% in a time span in which official inflation says tuition in 2015 should have cost 25% more than it did in 2004, i.e. $7,105. Oops—the real world costs are basically double official inflation—a difference of about $30,000 per four-year bachelor’s degree per student.
Here’s my alma mater (and no, you can’t get a degree in surfing, sorry):
University of Hawaii at Manoa:
2004 in-state tuition: $4,487
2016 in-state tuition: $10,872
Sure, some public and private universities offer tuition waivers and financial aid to needy or talented students, but the majority of households/students are on the hook for a big chunk of these costs. And remember that many students are paying living expenses, which doubles the cost of the diploma.
If you think I cherry-picked these two public universities, check out this article.
So the divergence between real-world costs and official inflation isn’t limited to burritos; it’s just as bad in items that cost tens of thousands of dollars.
As for healthcare: feast your eyes on this chart of medical expenses.

According to official inflation calculations, the $12,214 annual medical costs for a family of four in 2005 “should cost” around $15,000 today.
Oops—the actual cost is $25,826, $10,826 higher than official inflation, which adds over $100,000 in cash outlays above and beyond official inflation in the course of a decade.
So let’s add the $30,000 per university student above and beyond inflation for two college students over a decade and the $100,000 in healthcare costs that are above and beyond inflation over that decade, and we get $160,000.
Since deductions for education and healthcare don’t completely wipe out income taxes, the household has to earn close to $200,000 more over the decade to net out the $160,000 to pay typical college and healthcare costs above and beyond what education and healthcare “should cost” if inflation in big-ticket items had actually tracked official inflation.
$100,000 here, $100,000 there and pretty soon you’re talking real money in a nation in which median household income is around $57,000 annually.
So if a household’s income kept up with official inflation over a decade, that household would have to earn at least $20,000 more per year just to keep pace with real-world, big-ticket cost increases.
That’s the problem, isn’t it? If the household’s wages only kept up with inflation, there isn’t another $20,000 a year in additional income needed to pay these soaring big-ticket costs. So the shortfall has to be borrowed, burdening the household with debt and interest payments for decades to come, or the kids don’t attend college and the household goes without healthcare insurance.
Once again, real-world costs have soared at a rate that is almost six times higher than the official rate of inflation.
The reality is real-world inflation in big-ticket essentials is crushing every household that doesn’t qualify for government subsidies of higher education, rent and healthcare.

No wonder the political and financial Elites don’t care about inflation: their incomes have soared far above mere inflation. When you’re skimming millions, who cares about a mere $150,000 for a university education, or $25,000 for healthcare insurance?
Do you reckon the lobbyists for Big Pharma and the rest of the healthcare racket are spending millions lobbying politicians to slash the soaring costs of healthcare? Do you think all the universities collecting billions in government-guaranteed student loans are lobbying politicos to reduce loans to debt-serf students? Sorry, but that’s not how pay-to-play “democracy” works.
In pay-to-play “democracy,” the goal is to raise prices without improving service, and have the federal government enforce this racket on powerless debt-serfs.
If you want to understand why we’re fragmenting as a society, start by looking at the asymmetric burdens imposed by inflation. The Elites aren’t worried about inflation because they don’t even feel it. And since they rule to benefit the top 5%, they don’t really care what the bottom 95% are experiencing.

In other words, “Let them eat cake.”