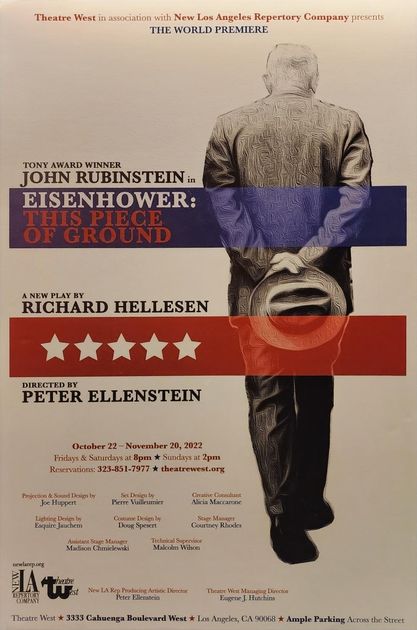 Eisenhower: This Piece of Ground by Ricard Hellesen and under the direction of Peter Ellenstien, had its debut opening at the Theatre West and New L.A. Repertory Company on Oct. 28. This one-man-show features Tony Award Winning actor John Rubinstien as Eisenhower himself.

The play began and ended on two harsh notes: disinterest and then tears.

John Rubinstien paraded around the stage–alone—disgruntled and angry. A man with a worn face, speaking in a west southern accent; hands clasp behind his back. The monologuing of the script was internal thoughts to himself as well as preaching to his choir, the audience.

The play consists of two 50-minute act’s and with everyone, the fourth wall was broken. Broken with many times making eye contact to an audience member. Rubinstien was talking to us. The engagement had a sense of vulnerability to this form of acting, and not just to his audience, but to himself as well.

To be completely honest, I felt as if the first act was too wordy and lacked emotional substance. The context that was given was that of an archaic United States history book. Eisenhower (Rubienstien) paced back and forth the room. That of an already retired president, speaking about the turmoils and hardship of the position of the leader of his country. As a matter of fact, not only his, but of the presidents that preceded him as well.

The preaching of war and the reasons for why we have so much blood on our hands and the weight that it put on not only the country’s shoulders but his as well was extremely illuminated in the second act.

“It’s hard to look a man in the eye when he’s looking at his death,” said Rubenstien … “the only purpose of war must be peace. Otherwise, what’s the purpose of sacrifice.”

Rubenstien’s rendition of Eisenhower was captivating and convincing. So convincing, that I wanted to stand from my seat, hand raised and ask a couple of questions. I also felt as Rubinstien was an animatronic at Disney’s Hall of Presidents.

After the performance I managed to speak with Mr. Rubenstien for an intimate response.

“How did you plan for this role?” O asked

“Well, I didn’t get the inspiration to play it. I’m an actor, and actors are always leaving Their next job and their next role, hoping you get the next one. Every time you do one, you figure this might be the last time I ever do anything. So, I was just minding my own business, and Peter Ellenstein, who directed this play got in touch with me. We’d known each other for some years before and he said, “I’ve gotta play.” it’s a one man show in about Eisenhower, would you like to come and do a reading with me and the playwright. I said sure I read it off the page and I loved it.” Said Rubenstien