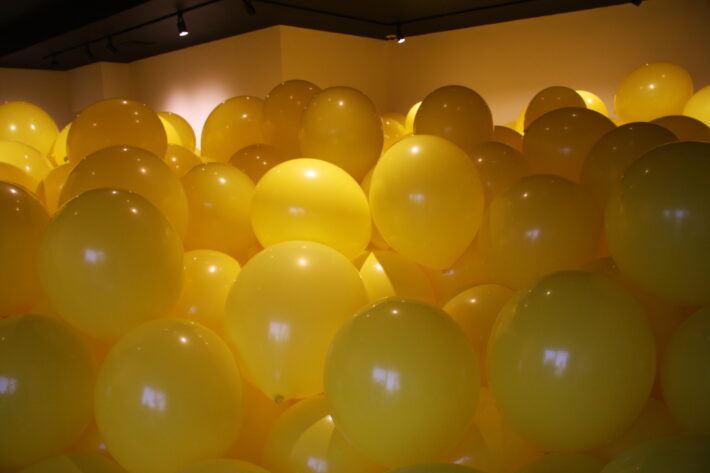 Los Angeles, California –  On October 27, 2022 Dries Van Noten’s Little Gallery opened with a solo exhibition of Martin Creed’s Work No. 2587 “half the air in a given space.” The work presents half the air within the Little Gallery filled with vibrant yellow balloons.

On first approach the work appears frighteningly temporary and minimalist. However, when stepping into the space, I couldn’t help but feel like a child as I waded through the yellow field, with the occasional bursting of a balloon from varying corners of the room bringing laughter. Suddenly, I was no longer amongst the urban noise of the city. Instead, I entered a new experience – a manufactured one. Which was left entirely up to my own perception. Another visitor entered the space, but as a balloon exploded upon her first steps, she quickly left.

In an interview with Charolette Higgins of The Guardian, Creed discusses his artmaking practice as a “catalyst,” “People use the work to help them make something in themselves.”1 This acknowledgement of the subjectivity of the viewer, allows a visceral experience to create a unique journey for the visitor.  One must step into Creed’s work, which is alive and engulfs you.

But there is a balance between Creed’s complete control in the manufacturing of the experience, juxtaposed by Creed’s lack of control – that is the element of chance – within his practice. Within Creed’s Work No. 2587, the element of chance is presented by the unpredictability of each balloon popping at arbitrary increments, in varying places across the room. This allows for a uniqueness of each experience within the piece, and an irreproducibility. Reminiscent of Marcel Duchamp’s “canned chance,”2 exemplified within Duchamp’s Three Standard Stoppages (1913-1914), in which Duchamp allows three strings to fall upon a canvas, recording the places they land – thus creating a chance procedure or as Duchamp calls it “Canned Chance” to interplay within the work. The way the strings land relinquishes the artist’s control in the production of the work – so that “chance” continuously is at play in the production of the work.

Martin Creed’s solo exhibition at Hauser & Wirth, opened the following day October 28, 2022. Entering into the exhibition space, the gallery attendant wears a boxy black cowboy hat, as he directs the visitors down the ramp to the center of the room, and flicks the lights off. A large screen turns on. Martin Creed appears on a tennis court, holding an electric guitar. As Creed serves the ball, striking it with the guitar a disjunct note rings out. The ball returns and Creed hits it again with the guitar. The notes played resonate, almost as if they were meant to appear alongside one another.

One wonders if the artist selected a clip in which the notes compliment eachother – or if by chance they happen to. The screen goes off and the curtains open on the adjacent wall. A brown tinge sock tied to a string dances as it is raised from the pedestal. Suddenly, ones attention is diverted as a man runs past the window outside. Then again quickly runs back the other way. It seemed peculiar that a man would happen to run past the window right at this moment, I contemplated the odds, the chance of this happening.

Walking around the now lit room, one can gaze at what looks like molded bread spinning in a display case. This gives a sort of absurd levity, as it spins like a piece of jewelry up for auction. Lingering in the room long enough, I managed to catch a second and third viewing of the works. Each time the same man ran back and forth. I began to wonder if he was crazed. After a short inspection behind the building, I quickly learned they were two paid actors – exhausted and sweating. I realized this part of the composition. The experience left me confused, but as I began to unwind, I realized Creed is playing with a manufacturing of an experience, however as the guitar rings out in two complimentary chords, the sock dances with an uncontrolled motion, and the man runs back and forth past the window – Creed procures chance (canned chance) and allows the world to interplay with the production of the artwork.

Creed’s manufactured experiences, take on a process in which many step feels mundane, meaningless, and abstracted from the natural human order – we arrive at a sort of dystopian bureaucracy – something like going to the D.M.V., getting your passport, or paying a parking meter – one which feeds us all the same steps, creating a obscure, surreal experience, a weighted, timed process which can leave us in a sense of confusion or frustration. Creed provides just another strange constructed experience, like so many we as humans already impose upon each other. Perhaps, each step does not make sense immediately, however, coming out of the experience – one realizes in its composition, the odds, the chances of ever seeing anything like this again are slim to none, unless of course you visit the exhibition again. I recommend you visit at least once.

1 Higgins, Charlotte. “Martin Creed: ‘I Don’t Know What Art Is’.” The Guardian, Guardian News and Media, 30 May 2012, https://www.theguardian.com/artanddesign/2012/may/30/martin-creed-interview-olympics