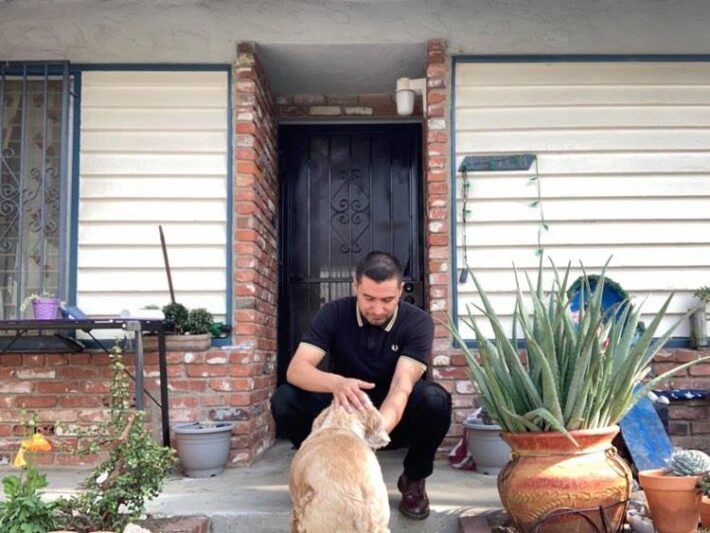 The L.A. music scene has been notoriously noteworthy for producing some of the most famous and seedy musicians for decades; on the other hand, L.A.’s music scene has also produced a vast amount of extremely talented, independent artists. It is no argument that Los Angeles has been a safe hub for musicians to showcase their talents and passions on small and big stages alike. Festivals and backyard gigs are a commonality to the culture of the scene. Growing up in L.A., it is hard to not see a flier or social media posting calling out to all the music lovers in the surrounding areas. Individual fans even follow their favorite local bands–weekend to weekend–starstruck and jamming out to the sound and beats of their favorite local artists; here is one of them.

Freddy Tapia, 35, self-proclaimed, proud Chicano punk rocker, has been in the punk music scene for well over 15 years. He is the guitarist and lead singer to the band, badBruno, located in the outskirts, just north, of Downtown Los Angeles. Although born in Boyle Heights with a North Hollywood young childhood, his family eventually moved to Pacoima at the age of three. Even though he was pulled from the city lights of Los Angeles, he did not allow that to dim his native L.A. right toward music and performance.

He recalled the first time that he picked up a guitar; a major turning point of interest.

“I was in the ninth grade … one of my neighbors that lived down the street; I would go all the time to his house during our summer breaks. I would go over there and just play video games but, there was always this guitar that was hanging in his older brother’s closet. His older brother had moved away … he had left his guitar behind and that was why I would do this thing, do “bathroom breaks” and go and strum that guitar a little bit … go grab pizza and back to playing video games.”

Although Tapia has experimented and continues to experiment with many art forms—such as ballet, writing and film–he feels that guitar has been his voice, his rawness.

“Being able to be loud and obnoxious, but at the same time to make sense and make notes that sound good… it’s a good release.”

Pop music never drew him in the way that other genres– which might have been seen as unconventionally attractive–did. Growing up, he could not relate to the music that he said was so over-fabricated. Instead, his taste was sketched to the sounds and lyrics of groups and artists such as The Fugees, The Offspring and Tom Waits—to name a few. The alternative rock band, The Smashing Pumpkins, ultimately ended up being the biggest influence during the beginning of his guitar career. Tapia said how he would become excited as he learned to distort the sounds and sling his fingers up and down the frets, trying to mimic Pumpkins.  Although he felt that he couldn’t completely find the same riff that his biggest influence gave him; that specified frustration gave him the thirst to express himself further.

“It made me feel like I was staring into the void, and it was staring back …to me, that really sunk …in terms of expression.”

He remembered carrying his 15-WATT Amp to jam in his friend “Gibbs’” 14×14 bedroom, which had been stripped from its furniture to make room for the musicians that now occupied it. This is where his, “I can make music!” epiphany happened.

He started the band, badBruno, in 2006. They have played with such artists as Guttermouth, Agnostic Front and First Blood. The band has performed in several venues and conventions such as The Key Club, Punk Rock for Premies, and the Simi Valley Music festival; and have toured as far as Mexico City. As recent as March of 2021, Tapia, on behalf of badBruno, has been interviewed on the Argentine punk rock platform, Charla de Pelo’s: Voices of the Underground in Argentina, noticed for their cover of Reconciliation; originally performed by Rancid. He has also been spotlighted in VoyageLA, an L.A. based magazine. He has continued to stay true to his Mexican roots by covering Tigre de Norte’s famous song ‘Pacas de Kilo’, of course with a heavy punk sound.

“I don’t know if I am an influence that’s changed the course of things, but it has come to the point where I’m comfortable in the scene, and it’s fun; it feels good to know that some people recognize me or they  recognize the band …they don’t need to recognize me…I’m myself either way…I feel like if I do make any changes in the scene, it should come organically.”

It is no argument that punk rock and Tapia have shared a romantic relationship with one another; a complete affair. His eyes widened when he spoke on the subject.

“Punk comes from more of an aesthetic; (punk) comes from some like, almost terrestrial real, natural feelings. It’s something tangible; it’s not something mass produced in a factory… it’s the difference between mahogany furniture and knowing it’s been passed down and a plastic, folding pong table. They’re both tables…they are both functional, but one of them is mass produced—and one is great. Punk equals wood.”

Let us look at the integrity that wood carries: it is versatile, wood can be molded or carved, it can change; it grows… When you slice into wood, all the layers of years of growth are exposed, ringlets of time.

Amongst all the layers that Tapia has as an artist, he has layers on many other platforms as well. He is a community leader, works for a government sector, received his bachelor’s degree from Antioch University, owns a music and production company, BAD BRUNO and is a foster father. Just like wood, Tapia has shown and proved himself to be just as versatile, after all, wood equals punk, right?

“Music contains the answers to appreciate the universal question of ‘where did we come from’. Like ancient scrolls shot into space that we intercepted light years into our past, like a deliverance from nothing to nothing, music means everything.” -Freddy Tapia