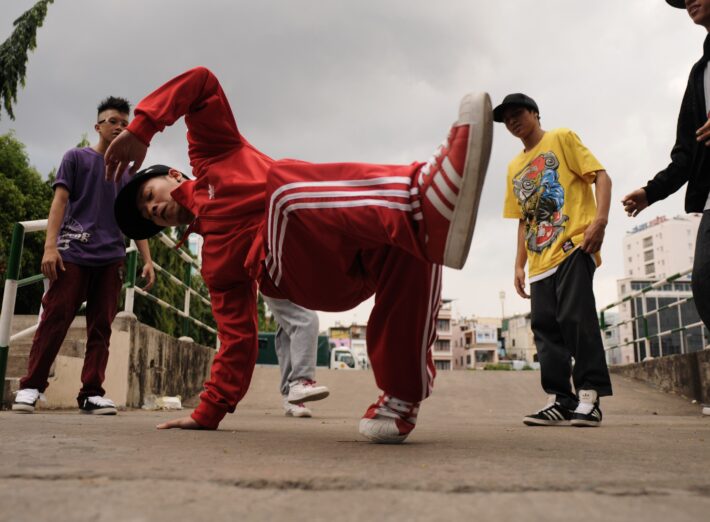 Sài Gòn Yo! or Saigon Electric (2011), an independent Vietnamese Hip-Hop coming of age film, turns 10 years old this year. I remember seeing the film at a sold out Viet Film Fest screening in Irvine around May of 2011. The audience was “electric” and engaged by the story of youth and the sub-culture of break dancing (b-boying) in 2010s Saigon, Vietnam. I spoke to an old friend of mine from my wedding videography days, Danny Do, who produced the film along with Anderson Le, Elizabeth Ai, and Stephane Gauger (the film’s director), himself. Danny spoke about how he met Stephane while working on one of the films that would kick start the Viet Film Wave, The Rebel (2006). Gauger recruited Mr. Do for his next project, which would turn into Sài Gòn Yo!, because he thought Danny (who was born in Vietnam and raised in Santa Ana, CA) knew a lot about the Hip-Hop culture, which he did. He jumped at the opportunity and instantly hopped on a plane to Saigon to do more research. The project was now in motion.

While doing research on the b-boy scene in Saigon, Danny thought he could accelerate the casting process and reached out to stunt coordinators from The Rebel to find talent for the film. “I was led on a wild-goose chase when I was instructed to head to Hanoi to find dancers with the stunt coordinator.” It wasn’t a smooth ride because as soon as he arrived in Hanoi, they advised him to return to Ho Chi Minh City. Things weren’t a total loss, though, as he was able to recruit Viet Max (who would later become a well known influencer) who was cast as the leader of the North Killaz, the rival crew and antagonists of the film. The rest of the cast was soon filled through casting and recruiting in Saigon with the majority of the cast being first time actors. With an estimated budget of $500,000 USD (according to IMDB) and including about a $13,000 crowd fund from indiegogo, it was truly a micro-budget and guerilla shoot production with crew members often taking multiple roles and crew functions. The shoot ended up lasting 23 days, according to Do, with very simple locations and setups shooting digitally on Panasonic and Sony 1080p cameras.

The film was released in April 22, 2011, according to the Wiki page, with international release, including the States, in mid to late May of 2011. The popular general consensus of the film, “wasn’t well received domestically but praised internationally,” and that’s according to how Vietnam wasn’t ready for the sub-culture of break-dancing on screen but also for independent cinema, in general. Before films like The Rebel from Charlie Nguyen or Journey from the Fall by Ham Tran, Vietnamese audiences were more conditioned by Hong Kong action films or Hollywood blockbusters. Creatively rich independent cinema was a relative unknown to audiences in Vietnam, thus the poor financial reception. But Danny Do spoke about director Stephane Gauger’s (who unfortunately passed away in 2018) intentions for the film as a stepping off point for the next generation of filmmakers. Which is quite a difficult, yet pragmatic, perspective to grasp as an artist and filmmaker. You never want to accept defeat, but he acknowledged the fact that his message and vision may be ahead of its time in his current cultural and cinematic landscape and ultimately accepted it as an inspiration for youth and the next wave of filmmakers in Vietnam.

Which is where a producer like Danny Do comes in. Speaking to him about Sài Gòn Yo!, I like felt I was listening to a wiser old gentleman talking about his former failed relationship or business venture. He recalled it with great nostalgia and fond feelings but also like a great learning lesson. Do also spoke fondly of his relationship to Stephane and how he was like an older brother and mentor to him as a young producer and filmmaker. “I feel content, not sadness, when I look back on his memory. He left a profound legacy for me and the future of Vietnamese filmmakers that I will never forget nor take for granted.” Danny Do is in pre-production on a sequel to Vietnamese Horror film Muoi: The Legend of a Portrait right now that has been delayed due to COVID-19. He knows how proud Stephane is of him as he, himself, is directing films now, living the dream in an industry that still hasn’t been around that long in Vietnam. From my own knowledge there are 3-4 cinema chains in all of Vietnam, whose film industry instills amazing creative freedom there as long as you “know your audience.”

For me, personally, Sài Gòn Yo! also represents a specific time in my life. It’s borderline surreal because Danny Do and I were sort of in the same boat. Cinematic creatives with the aspirations of making it to Hollywood. While I was content with my mediocrity in event video editing for the next 8 years, he was bold and daring and ambitious enough to break out in the Vietnamese Film Industry. Hollywood has a long way to go when it comes to representation of Asian Americans. Thankfully films like Crazy Rich Asians and the upcoming Shang Chi Marvel film and Spike Lee’s Da 5 Bloods (in relation to Vietnam) are changing the norm. It brings us hope that the American film industry is starving for representation of stories from non-white voices and it’s a wonder to behold. Sài Gòn Yo! did something for me and millions of young Vietnamese-Americans that a Hollywood film could never do: represent me and my specific culture. On the surface, Sài Gòn Yo! was a film about the breakdancing scene in Saigon, yes. But underneath it represented the alienation of youth and generational barriers between the older generation and the next generation. That’s something I still struggle with today and I’ll always be thankful for Sài Gòn Yo! and it’s powerful, special, and prideful themes and messages that hit home for me completely.

Sài Gòn Yo! is available to stream now with English subtitles on Amazon Prime Video.