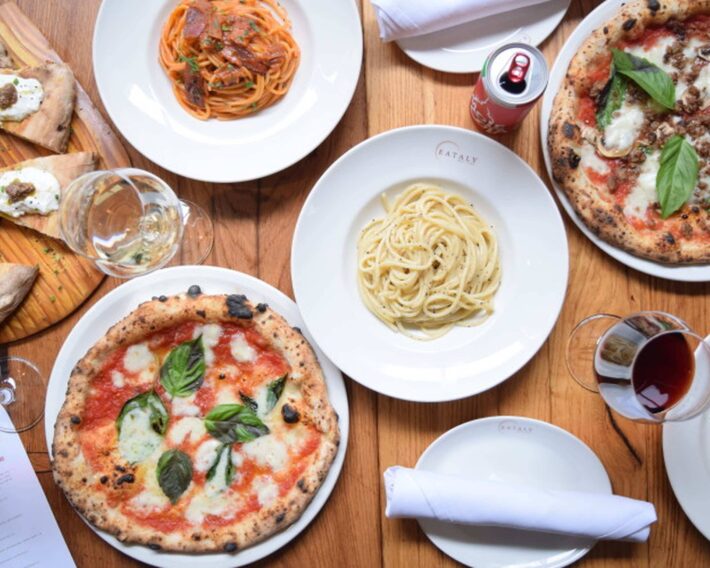 Eataly is perfect for a date night, a grocery run and even a delectable charcuterie board made with the robust daily cold cuts and cheeses. The energy is alive and full of eager mallgoers who want Neapolitan-style pizza, wine and experiences that aren’t a typical sit down.

Eataly has a few different restaurants within its corridors of cuisine. Thea and I went to Le Pizza and Le Pasta, which is an upscale charmed dinner area. Seated next to the kitchen, we recieved the honor of being served by lovely Noeme–a bright wonder–who was equally as excited to take us on the voyage.

It happened to be the dawn of truffle season too. While raw mozzarella and verdant basil scents filled our noses, Noeme helped us navigate the menu and taught us about the history of truffle season.

Did you know that trained truffle dogs exist to sniff out the prized black mushroom and they did it at night in order to ward off potential thieves?

Eataly offers both Burgundy black truffle or highly prized white truffle shaved tableside, which felt intimate and had a much better “say when” situation.

Thea and I were enthralled by this mycological history lesson as we crunched into the bruschetta ricotta e tartufo on homemade otto tondo bread. It blended well with the red Montepulciano d’Abruzzo 2020, as it did with the other dishes we devoured like the tagliatelle alla bolognese, ribboned and adorned with beef ragu and 12-month aged parmigiano reggiano.

Forgetting the pizza would be forgetting a fabric of space itself. Noeme presented salsicciotta, with the classic lineup of buffalo mozzarella, mushrooms, and a robe of San Marzano tomato sauce undressing our taste buds. Thea didn’t think we were splitting it, which why in God’s name are you bringing a friend to eat if you aren’t going to split a salsicciotta? That’s page two of the Declaration of Independence.

The milieu of the holiday season, a precipitation on the spirit and the chatter of appeased strangers made way for my inner child–so dessert was a fine curtain call. What better to bow into winter than a build your own cannoli kit, which was brought out to us as if IKEA made Italian pastries suddenly. Crunchy nuts, the shell of elegantly embossed cookie, and the tube of frosting that made you feel you were a baker smiling over the Po River. I was afraid if I spent more time here, I would suddenly have to clock in, but the entire moment was blissfully innocent.

The simplicity of Le Pizza Le Pasta is that’s what you’ll get. Besides the specials like Polla Alla Milanese, you get a myriad of in-house crispy pies and clouds of fluffy pasta, which are available in the marketplace among libraries of gins and cheeses as well as exceptional catering not only to the stomach, but to the soul. Eataly is a beautiful vacation of flavor for which no passport is necessary. Also, Noeme is the best server. Happy truffle season!

A café this beautiful and mesmerizing should not be in a plaza next to a coin laundry. It should be in a French hillside where bucolia and cheese makers exist and harpsichord fills the air.

Yet, miracles happen. Los Angeles gives consistent reasons why the spectrum of culinary offerings is never short. Le Coco is a bouquet of floral wonder in Downey. The ice cream café is a Chanel/designer inspired café that serves incongruent but intriguing Hispanic fare such as the chilaquiles verdes. The coffee drinks all are blanketed with foam art that has the Chanel logo on it, or words like “Love.” The creativity is magnificent. The menu is abundant in bright color, fresh fruit and creamy edibles.

The birthday cake gelato is astounding in presentation. A scoop of electric blue is drizzled in bold raspberry crimson and peppered with sprinkles and mint chocolate chips. It is all crowned inside a magnificent golden cup tower and coupled with fluffy coconut muffins. While the food is quite tasty, it is the overall experience that enhances everything.

The servers are incredible. They offer five star service and want you to feel present minded. You forget you’re even in California with the orchestral music playing overhead. It’s an immersive experience and highly Instagrammable. They encourage photos and with a bright pink milieu, why wouldn’t they?

Dress in your Sunday best to match the bubblegum heaven that is Le Coco and prepare to be dazzled.

Simply put, Mulberry Street Pizzeria is the best pizza in Los Angeles. It’s an unarguable fact. Even people who say there is no good pizza in L.A. (which face it, they’re lost souls), agree Mulberry Street is incredible pizza. It turns cynics into believers through the power of celebrity testimony and high-quality pie.

I was introduced to Mulberry Street by my then girlfriend and I decided to take my crush to Mulberry for her first time. I told her she would be enthralled by the New York style atmosphere, the welcoming cooks, and the scrumptious, toasty delights within.

She more than agreed with me. Upon her first bite of the eggplant parmesan slice–which is my favorite–she said, “It’s the best pizza I’ve ever had.”

Mulberry Street is unique for their toppings like baked ziti and buffalo chicken, the slice siz–which is unbelievable, and the crispy crust. The slices are all ready to order. Tell them what you want, and they throw it in the oven. I highly recommend a cup of orange bang to go with it. Nothing like a sweet creamsicle to balance out the rustic lycopene wonder of the slices.

The white spinach slice was creamy, the ricotta was fluffy and the buffalo chicken was a spicy and confident character.

I have never had a bad slice from Mulberry and I don’t think I ever will.

This was a first for me. I got an entire restaurant to myself during dinner time, and I’m not even a celebrity. Well at least not in other people’s minds (Kidding).

India’s Clay Pit lays colorfully on the corner of Lankershim and Collins Street in North Hollywood. It’s casual Indian dining with an air of sophistication. The restaurant inside is juxtaposed with beautiful orange tables, cultured wall art and music equipment for a dance party.

The restaurant was empty for dinner when my friend and I went, which was surprising, but they had many online orders being made. People still like being home it turns out.

The menu itself was jam picked with all the classics of India. Curry, vindaloo, vegetables, and of course many types of naan. The prices are great and we went with the combination dinner for two.

The combination dinner for two is one of the best meal deals in North Hollywood for what you get. For only 50 dollars, this meal presents you and your friend with a buttery and crisp vegetable samosa that melds beautifully with the green sauce, chicken tandoori with lettuce and tomato garnish, a choice of vegetable entree (we chose cauliflower and potato aloo gobi), a chicken or lamb entree (we went with the creamy and spicy chicken makhani), basmati rice, naan and dessert (we chose gulab jamun).

We were stuffed afterwards. Every dish blended beautifully and tenderly, a tango of the East in our mouths. It was almost an aphrodisiac.

Highly recommended all of these eateries and we will absolutely go again.