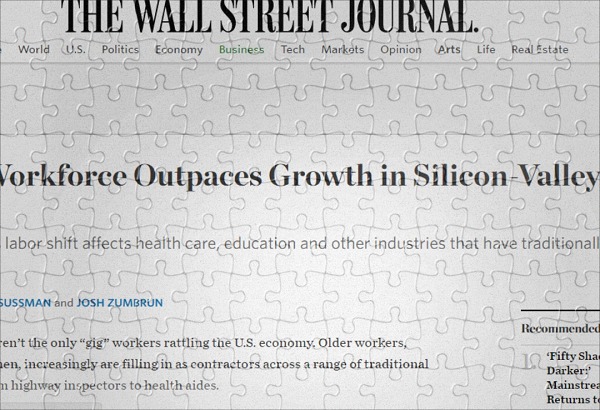 I kept an old article bookmarked so one day I could look back at it, today I did. The Wall Street Journal Contract Workforce Outpaces Growth in Silicon-Valley Style ‘Gig’ Jobs
…estimate the share of workers in alternative arrangements has more than doubled to 11% in manufacturing and to 16% in health and education. It has quintupled, to 10%, in public administration. Workers in these alternative arrangements often find themselves with erratic schedules, spotty earnings and few benefits such as health insurance, Social Security or a retirement plan.
From 1995 to 2005, the “gig” workforce grew from 9% of the jobs to 10% of the jobs. Since then, the “gig” workforce grew to 16% of all jobs. Today, the survey estimates 17% of women and 15% of men hold “gig” jobs.
Definition of Gig? The Journal reports “Since 2005, the number of workers in alternative arrangements has climbed by more than half, rising to nearly 16% of the workforce from 10% a decade ago, according to forthcoming research by Alan Krueger of Princeton University and Lawrence Katz of Harvard University. Meanwhile, the on demand workforce or gig economy employs only about 600,000 people, or less than 0.5% of the workforce, the research finds.”
Is a gig an ‘on demand’ job as the Journal defined? Or is a “gig” an “alternative workforce arrangement job” as the Journal also defined the term?
Gig Effect on Jobs and Unemployment Based on the study (at least on the facts as presented in the Journal), we cannot measure gig effects on the U6 unemployment rate because the article failed to mention how many were full-time jobs. U6 is a measure of unemployment that includes those working part-time. Those who work as little as one hour a week are counted as “employed”.
However, we can estimate the growth in “gig” employment, using the term to “gig” mean an “alternative workforce arrangement job”.
Gig Statistics
Total employment in December 2010: 139,301,000
Total employment December 2015: 149,929,000
2010 “gig” employment (10% of line 1): 13,930,100
2015 “gig” employment (16% of line 2): 23,988,640
The growth in “gig” employment since 2010 is approximately 10,058,540 using “Civilian Employment“, a household survey measure, in my calculations off this post.
The Wall Street Journal stated “the economy has added nearly 14 million jobs since 2014”.
The correct comparison statistic for “gig” analysis is on the order of 10 million, not 14 million (subtracting line 1 from line 2)
It appears the Journal used “Total Nonfarm Employees“, a payroll-based number.
Since the authors of the report measured via a 4,000 survey sample, the correct comparison is to employment, not jobs.