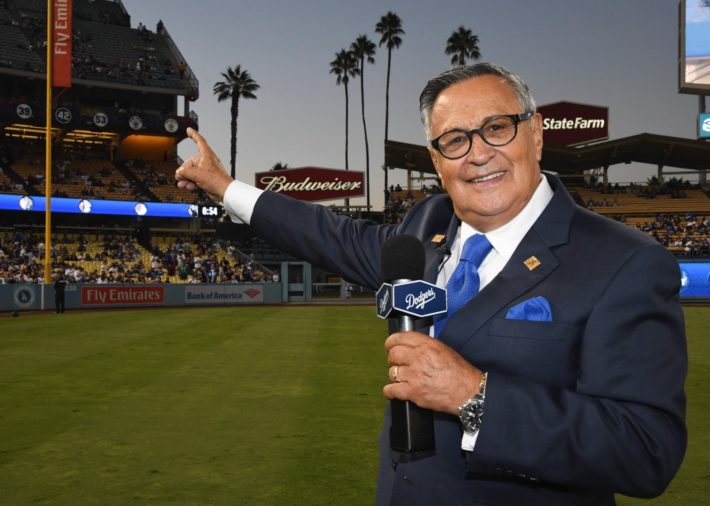 Los Angeles Dodgers broadcaster Jaime Jarrin will receive a proclamation at Tuesday’s Los Angeles County Board of Supervisors meeting for becoming the 12th inductee into the Dodger Stadium Ring of Honor.

Jarrin will be joined at the meeting by his son Jorge, who calls games on the radio alongside his father. The ceremony comes six days before the elder Jarrin’s 83rd birthday.

The presentation will be made by Supervisor Kathryn Barger, whose Fifth District includes San Marino, where Jarrin has long lived.

Jarrin was inducted into the Ring of Honor Sept. 21 for his 60 years with the team and helping boost its following among Southern California’s Spanish-speaking population.

Jarrin arrived in the United States from Ecuador in 1955, having never seen a baseball game. He began regularly attending Pacific Coast League games at Los Angeles’ since-demolished Gilmore Field and Wrigley Field from 1955 through 1957 to learn the game.

When the Dodgers moved to Los Angeles following the conclusion of the 1957 season, Jarrin was given one year to prepare to become a baseball broadcaster by William Beaton, the station manager at KWKW-AM (1330).

Jarrin never missed a broadcast from 1962-1984, calling nearly 4,000 consecutive games. The streak ended when Jarrin took charge of all the Spanish-language radio coverage and production for the 1984 Summer Olympics.

Jarrin’s honors include the Ford C. Frick Award, presented annually for excellence in baseball broadcasting by the Baseball Hall of Fame, and a star on the Hollywood Walk of Fame.

A day before Jarrin was inducted into the Ring of Honor the Dodgers announced that he had agreed to a contract extension that will take him through the 2020 season.

“It seems like it was just yesterday that I was at the Coliseum in 1959 and started my work with the Dodgers, the time goes so fast,” Jarrin said. “I’m still enjoying it just as much as I did 60 years ago.

“I love what I do, and it’s a privilege for me to be able to do it. I have had the opportunity to work with the best of the best, ballplayers, broadcasters and staff, and I have been so fortunate throughout my career. Of course, I have to thank the Dodgers and especially my wife Blanca for her support and for allowing me to do what I love all these years.”