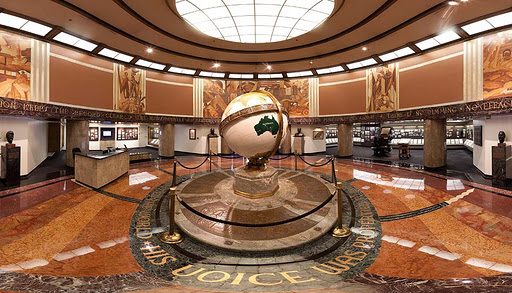 A 1970s addition to downtown’s Times Mirror Square moved closer to possible demolition Wednesday, with the Los Angeles City Council approving a historic designation for the complex that excluded it.

The rest of the complex, some of which dates back to the 1930s, was approved unanimously by the council to be placed on the list of the city’s historic-cultural monuments.

The building’s owner, Onni Group, plans to preserve the older structures but demolish the 1970s addition, which was designed by architect William L. Pereira, to make way for an apartment complex.
Although the fate of the Pereira addition had been the focus of passionate debate during meetings of the Cultural Heritage Commission and the Planning and Land Use Management Committee, the City Council vote was done without any discussion and part of a block vote on more than two dozen items — a quiet ending for a structure that once housed part of the West Coast’s largest newspaper.

The Los Angeles Times had been located at the complex since 1935, although the paper had been renting its space there since 2016 when its former owner, Tribune Media Co., sold it to Canadian developer Onni Group.

During a recent meeting of the Planning and Land Use Management Committee, Councilman Mitchell Englander noted that the Planning Department had only recommended the 1970s addition be preserved for its historical value, not for any architectural reasons, but the council generally looks for architectural value when it is designating monuments.

“We need a little more than that, than the feel-good historians, which is critically important for preserving and protecting what we’re losing every single day,” Englander said. “In looking at this one, it’s very delicate.”
But opinions on the addition’s architectural value were not unanimous. The Cultural Heritage Commission sided with preservationists in September and others who have argued the entire complex is worthy of preservation. The commission even added its own recommendation that the ’70s portion be preserved for its architectural contributions even though staff had recommended it was only noteworthy for historical reasons.

The commission said the 70s addition was a significant work of master architect Pereira, who also designed San Francisco’s Transamerica Pyramid, the Los Angeles County Museum of Art and many other well-known California structures.

The Chandler family owned and ran the paper for seven decades until the family-controlled Times Mirror Co. was sold to Tribune in 2000. Harry Chandler, son of former Times publisher Otis Chandler, asked the Planning and Land Use Management committee to consider the entire complex’s history.

“When we talk about what historical-cultural monument status is, it’s not just the architecture, it’s also the history. So in those three buildings I would argue not another three buildings in the entire city, next to the council chambers here, that more history happened,” Chandler said.

Developers cannot tear down any buildings while an application for monument status is being considered by the city. A historical designation would also delay the demolition of a designated property for up to one year while other preservation options are considered.

The Times Mirror application was submitted by a preservationist organization called Esotouric, which offers historical tours in Los Angeles, and signed by its co-founder, Richard Schave.

The Times Mirror Square complex consists of five buildings constructed between 1935 and 1973, according to a report by the Department of City Planning:

— the four-story Plant Building completed in 1935 that is an original two-story art deco/moderne-style building by Kaufmann, with two one-story additions designed by Los Angeles architect Rowland H. Crawford in 1946 and 1955;

— the 12-story Mirror Building designed in the late moderne architectural style by Crawford in 1948;

— and the six-story Times-Mirror Headquarters Building and six-story parking structure designed by architect William L. Pereira in the corporate international architectural style in 1973.

Bill Delvac, an attorney representing Onni, told the Planning and Land Use Management Committee the developer plans to “rehabilitate the historic heart of the complex,” while tearing down the Pereira addition and parking structure.

In a report, Department of City Planning staff said the complex is associated with the lives of historic personages important to national, state, city or local history, including for its direct association with the prominent Chandler family, in particular Harry Chandler, Norman Chandler, Dorothy Buffum Chandler and Otis Chandler, each of whom the report said played a significant role in the evolution of the Los Angeles Times from a local publication to a newspaper of national stature, and were influential in real estate development in Los Angeles.

The report also said the complex is as an excellent example of the art seco/moderne and late moderne architectural styles, and is a significant work of master architects Gordon Kaufmann and Rowland Crawford.