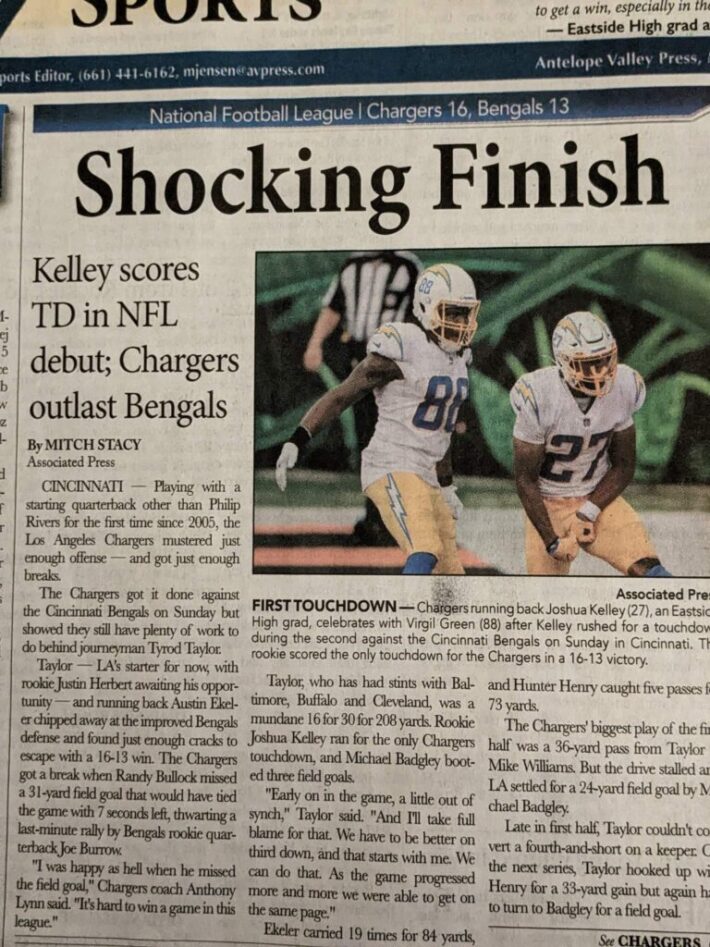 This is an interview I have been looking forward to since I started covering the Los Angeles Chargers. A truly ‘homegrown’ player that came from a small desert valley in Southern California.

I headed to Costa Mesa from Mojave to sit down with this local legend and have a chance to learn about the person as well as the player Joshua Kelley.

Joshua Kelley is a Running back for the Los Angeles Chargers. He first began playing football at Eastside High in Lancaster, California, he then played for UC Davis before transferring to UCLA where he rushed for 1,000 yards each of his two seasons with the Bruins, earning all-conference honors in the pac-12 in 2019. His successes were then followed by being drafted to the Chargers in the fourth round of the 2020 NFL draft.

Been a fan of Joshua since his UCLA days, so to start off the interview i had to show him something I’ve held onto since the beginning of his career. It’s the Valley Press issue of his NFL debut. Hes amazed I have this but wanted to show him where all pulling for him not to mention it was a great segway into my first question for the young NFL running back.

How does it feel to be a home-grown player?

Have you been back to Eastside High in Lancaster?

“Yeah, actually I went back last year during the ‘bye week.’ They called me out of the blue and said they were going to be doing something special for me. It was their homecoming. There were teachers that i had that still worked at the school. They put me into their hall of fame, which was a huge honor. There’s a banner and everything. it was amazing for them to do that for me.” Said Kelly.

Were there any teachers that doubted how far you could take your career?

“Yes! There were some that told me, ‘Start your back up plan now.’ I agree it’s smart to have a backup plan, but there was some definite non-belief. So that was cool to have that moment as well.” Said Kelly laughing.

This past offseason the chargers drafted Isaiah Spiller. How did you approach that situation coming into the season? Did you go for a competitive mindset trying to get the same job or did you take it from a mentor perspective?

“That’s a really good question. When I came into the league, I came into the locker-room as the rookie. The Chargers already had Austin Ekeler and Justin Jackson. Now of course it’s the NFL and were all fighting for a job and trust me I’ve been in locker rooms like that where the new guy comes in and they don’t care about him they care about the spot. This locker room wasn’t like that. Justin Jackson was amazing to me. He was a great mentor to me coming into this organization. I took the same approach with Isaiah. Anything he needs or questions, I’ve got his back. We’re competing but were all human beings. That’s awesome; the fact that there are multiple draft classes treating it the same way helping the next guy up. That’s more than just mentorship, it’s how true long-lasting cultures are started within organizations.” Said Kelly.

“I bet that having a running back drafted put a little pep in your own step as well. You seem like your old rookie self this season. The fans can tell you’ve been putting in the work.“

“Thank you that means a lot. it definitely motivated me in a positive way this offseason”

“You just got back off of IR and had your first game back. How are you feeling?”

Obviously, there are team goals for the year: make the playoffs go for a Lombardi trophy. Your averaging 4.3 yards per carry so far this season, do you have any personal goals for the rest of this year?

“Absolutely. I want to be the hammer. Iwant to do it all. I want to do special teams, running, catching, blocking whatever I need to do to help this team.” Said Kelly.

As you can clearly tell after Kelleys special teams running play on fourth down that got the Chargers a crucial first down during their lose to the Las Vegas Raiders on Sunday.

One of the most humble and gracious young men I have ever met, Kelly is an asset and core piece to this team, on and off the field. Thanks for the interview brother I can’t wait to see what you do this Sunday. I’ll be there rooting you. Look for the giant Banana.