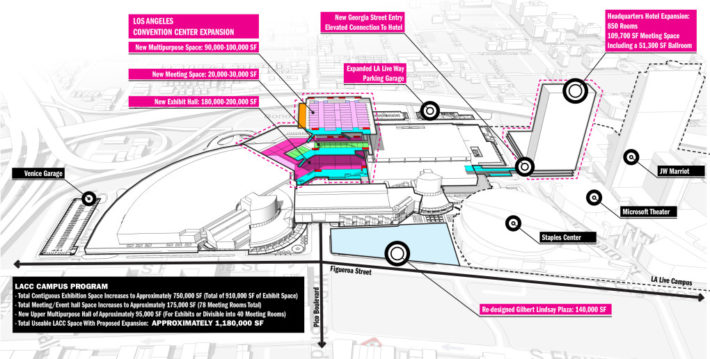 LOS ANGELES — The City Council on Wednesday unanimously approved the use of nearly $98 million in public funds for an expansion of the Los Angeles Convention Center and the adjacent JW Marriott hotel at L.A. Live.

Anschutz Entertainment Group, which operates the convention center and owns L.A. Live, has a $119.4 million shortfall in its $1 billion-plus plan to renovate the convention center and expand the hotel, according a report from the Office of the Chief Legislative Analyst, which recommended that the council approve $97.7 million in public assistance to get the project off the ground.

The City Council supported the investment, which would be specifically used for the hotel project, according to the CLA report. Half of the city revenue generated by the project — primarily through transient occupancy taxes paid by hotel visitors — would be used to repay the money, with the initial investment expected to be recovered in 25 years.

“I find these deals to be among the most annoying and frustrating things that come before us because I never think that they’re talked about right, or honestly,” Councilman Mike Bonin said at a Budget and Finance Committee meeting Monday. “On one hand, it’s talked about as a horrible giveaway to wealthy corporations, and on the other hand it’s talked about as the silver bullet holy grail way to grow and save the economy in Los Angeles, and it’s a lot murkier than that. To me, it’s one of the countless uncertain rolls of dice that we do to generate revenue to run a big city in an uncertain economy.”

According to the CLA report, which included an independent analysis by Keyser Marston Associates, the project will generate $195.5 million in net present value to the city over 25 years and would be developed through a public-private partnership with AEG and its partners. The council’s vote did not make the city’s financial assistance final, but its action freed up city staff to continue working out the details and negotiating with AEG.

Councilman Paul Krekorian, chair of the Budget and Finance committee, asked what due diligence had been done to ensure that AEG’s estimate of the financing gap was accurate. Kevin Engstrom of Keyser said an independent analysis had been done, using three different models.

“The ultimate finding was that the feasibility gap was all within … a range of like $5 to $10 million or maybe a little less for the three different models,” Engstrom said.

The City Council in 2015 approved recommendations to initiate a design competition for the LACC and authorized a $470 million budget for such a project, while the total cost of the JW Marriott addition would be around $693 million, according to the CLA report.

City Controller Ron Galperin said in August the city needs more transparency and accountability when issuing tax incentives for large-scale real estate developments, in a report that looked at almost $1 billion in incentives granted since 2005.

Galperin recommended that the city revise the scope of evaluations and consultant studies to require a more thorough evaluation of claimed “feasibility gaps,” encourage development with fewer public dollars, and require more rigorous analysis of future economic and fiscal benefits.

“Tax incentives can be a useful tool to help spur worthy projects and jobs. But when the city provides financial assistance to any business, it is vital that we ensure total accountability for every cent of taxpayer funds,” Galperin said. “It’s essential that every deal be maximally transparent and advantageous to taxpayers. That is why we need a clear roadmap to ensure consistency, fairness and value for those we serve.”